Based on actual events of World War II and sorely relevant today in light of the resurgence of hate-mongering and anti-Semitism in our current socio-political climate and widespread acts of terrorism and hate crimes throughout the world, the new play Vilna, now in a limited engagement at the Theatre at St. Clement’s, imagines the trajectory of two real-life boys-to-men, Motke Zeidel and Yudi Farber, who lived in the eponymous city in Eastern Europe during the unstopped rise and brutal control of the Nazi regime. Written by Ira Fuchs and directed by Joseph Discher, it’s a potent story that is both devastating and didactic, portraying the worst and calling for the best in humankind.

The narrative spans the lives of the two central figures – first friends, then brothers – from the ages of eleven to 28. During those formative years, they saw their hometown (claimed through the centuries by the antagonistic powers of Poland, Russia, and Lithuania) transformed from a beautiful cultured historic metropolis into the site of a forced Jewish ghetto, whose inhabitants would ultimately be sent to the horrific killing pits of the Ponar forest by order of Hitler. Presented in the format of a cautionary memory play with music, the backstories, interactions, and ultimate fates of the true characters unfold in fictionalized scenes that correspond directly to the documented historical chronology of the period (with the years and dates projected on the back wall of the set), as they are repeatedly confronted with unimaginable cruelty and have to make agonizing decisions in the hopes of saving themselves, their families, and as many of their fellow Jews as they can.

A compelling cast, with not a weak link in it, turns in deeply affecting performances throughout the course of the story, with its ever-worsening circumstances and slowly shifting tone, beginning with the growing antipathy among the different ethnic sectors of society, the increasing encroachments on the community’s lives and liberties with the German incursion, and the quiet recognition that “It’s not a good time to be a Jew.” The surprisingly matter-of-fact observations, pragmatic discussions, and passive compliance to avoid more severe reprisals against the Jewish population, all exploited to full advantage by the Nazis in Act I, turn to fear, panic, and desperation in Act II, as Hitler’s commanders become even more hateful and violent, demand even more deaths, and the reality of their heinous campaign of full-out genocide can no longer be denied.

Sean Hudock and Seamus Mulcahy star, respectively, as Motke and Yudi. They are polar opposites in demeanor, but loyal to each other and devoted to their people, as they purposefully plan together and act in secret to undermine the advancement of the Holocaust and to provide an opportunity for themselves and others to escape sure death at Ponar (the tunnel they dug while imprisoned was rediscovered through the use of Electric Resistivity Tomography in 2016, and provided inspiration for the present work). Tony-nominated Broadway veteran Mark Jacoby poignantly delivers the pain and wisdom of Motke’s father, hospitalized after an anti-Semitic attack in his city, now frail, bent, and walking with a cane, and well aware that, in his infirm state, he will number among the foremost targets for eradication by the Nazis. Jacoby also makes a momentous appearance at the beginning and end of the play, in the role of the spectral narrator who offers words of warning in direct address to the audience.

Carey Van Driest, as Motke’s mother, a doctor in the city’s Jewish hospital, and Sophia Blum as her colleague (and in her secondary role, as the chanteuse in a local cabaret), bring empathy to their portrayals of the strong, intelligent, and dedicated women and clear beautiful voices to the songs they sing in their original languages (a translation of two of the traditional numbers is included in the program). Their characters, along with Nathan Kaufman’s Jacob Gens, the hospital director, do their level-headed best to create a thriving ghetto, free from starvation, disease, and unsanitary conditions, and filled with educational and cultural activities and sports, until its destruction by the Nazis.

Another standout in the excellent cast is Paul Cooper as the sadistic and psychopathic Nazi Oberscharführer Bruno Kittel, who relishes the abhorrent cruelty, degradation, torture, and murder he executes without remorse (fight direction by Rick Sordelet), taking pride in being “so good at it.” His convincing performance is thoroughly chilling, shocking, and revolting. Rounding out the ensemble are Brian Cade, Tom Morin, James Michael Reilly, and Patrick Toon, all capturing the essence of their characters and lending fine support to the unfolding of the narrative.

Brittany Vasta’s simple bi-level scenic design, in earthy shades of brown and with a few pieces of movable furniture, easily transitions to the different locales in and around Vilna, and the arches and doorways of the background wall allow for the fluid movement of the actors and the story’s multiple scene changes, all enhanced by Harry Feiner’s effective lighting. Period-style costumes and uniforms by Devon Painter and an evocative sound design by Jane Shaw (including fervid speeches and popular music from the era) contribute well to the authenticity of the production.

While it’s profoundly disturbing to watch Vilna and its retelling of the inconceivable atrocities committed there, it’s important to remember what happened, and to ensure that it never happens again. The play is a powerful reminder of that, and of the relevance of theater in delivering the message.

Running Time: Approximately two hours and 25 minutes, including an intermission. 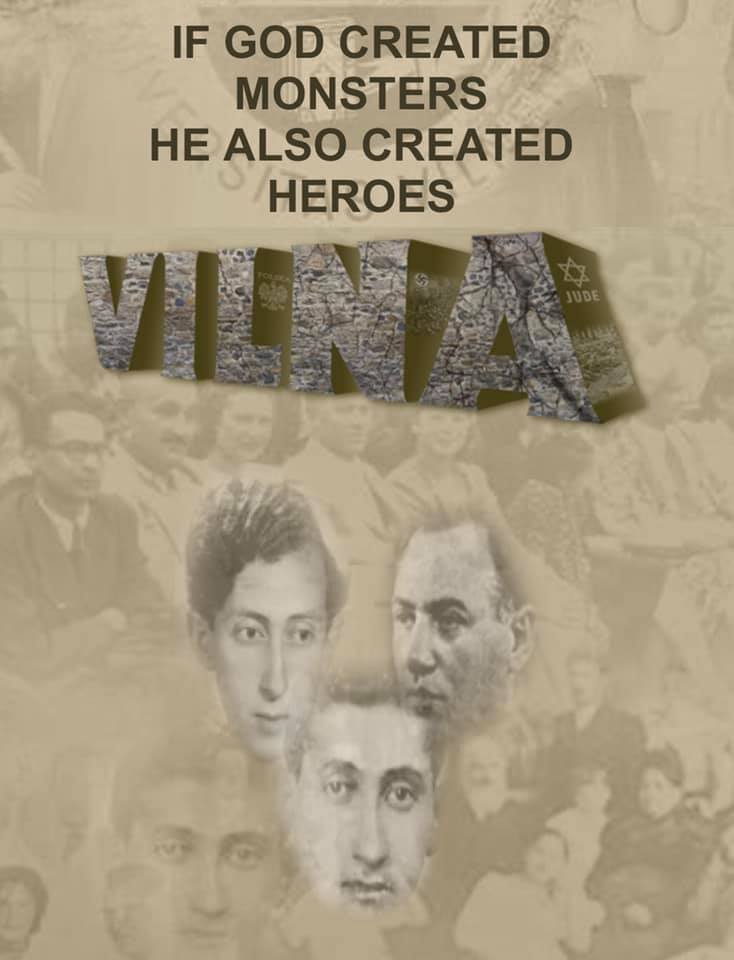