American theater blows off a lot of folx. Leaves out their voices. Doesn’t cast them. Isn’t interested in their stories. Two-Spirit indigenous transpeople, for conspicuous instance, are among the marginalized and erased.

Alex enters to a boppy beat-box track with a backpack on her back and a jaunty yellow flower in her hair—and she minces no words. She is angry that her native language and culture have been violently stolen. She is angry about the self-hate that results (“our internalized white supremacy, our internalized transmisogynoir”). And she is determined to reclaim and celebrate her identity through ceremonial communing with her ancestors (whom at one point she calls transcestors).

The actor who plays Alex (as well as three other characters in masks) is also the playwright, Xemiyulu Manibusan Tapepechul. Xemi, as she is known to friends (it’s pronounced Shem-ee), is herself “a Two Spirit Trans Womxn from Kuskatan (El Salvador),” as she explains in an enlightening self-profile. Siwayul (Heart of a Womxn) is a “one-Femme theatrical play” adapted from a book of her poems—and the language in the piece is by turns piercingly personal, stirringly spiritual, and harrowingly political.

In the work, playing briefly at Capitol Hill Arts Workshop, Siwayul is one of the masked characters Xemi plays: the revered deity of Two-Spirit Womxn. When Xemi speaks as Siwayul, her voice is prerecorded as though from an ancient oracle.

The parenthetical in the title, Heart of a Womxn, refers to a realization that Alex comes to that she is not, as some have othered her, a gay man, but that she is in fact, as Siwayul reassures her, a trans femme with the heart of a womxn—an affirmation that the piece celebrates, in poetry, song, and dance.

The black box space is set with black-draped tables holding masks, a drum, Alex’s signature yellow flower, and Alex’s tablet. A captivating track of indigenous drums, flutes, and vocals weaves in and out of the dozen scenes, and pools of light follow the actor around as if seeking a way through the dark. One of the characters, appearing in a skull mask, is Siwanawal, the spirit of La Llarona of Indigenous Mesoamerican folklore. Xemi’s performance in this fierce passage achieves a stature almost tragedian as her now deepened voice becomes a wail for all weeping womxn.

A third masked character is Nantzin Paula, a historical figure who helped revitalize the Nawat language. Xemi performs her scene wearing a grinning mask in Spanish and in Nawat, and sings a song completely in Nawat. Here and at other points in the show, when Xemi acts from behind a mask, it is as though emotions are released and selves and spirits expressed that could not be so rawly real otherwise.

One senses throughout that Alex’s quest for clarity and certainty about who she is (and has every right to be) echoes Xemi’s own journey to selfhood. That resonance of autobiographical authenticity is what makes Siwayul (Heart of a Womxn) all the more truthful, all the more urgent, and all the more worthy of witness.

Running time: 55 minutes with no intermission. Performed mostly in English with some Spanish and a little Nawat. 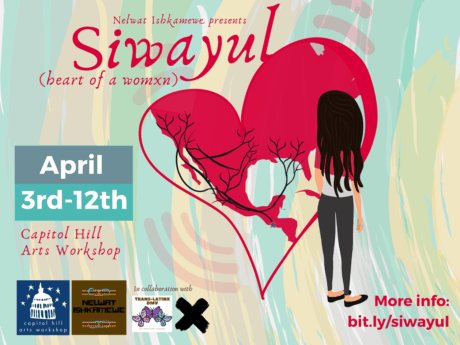 The 8 pm performance Friday, April 12, will be ASL-interpreted.
*In December 2019, the company changed its name to Angel Rose Artist Collective.