Among the unimaginable atrocities perpetrated under Adolf Hitler’s command was Aktion T4 (or the “Euthanasia Decree”) – the systematic murder of an estimated 200,000 people with disabilities, including children, teens, and youths, between 1939 and 1945, at six converted psychiatric hospitals in Germany and Austria. To justify their inhumane campaign of extermination, the Nazis classified their targets as Lebensunwertes Leben (“life unworthy of life” – or ‘invalid’ people), declaring that their mass annihilation would alleviate the struggles of their families and the financial burdens they placed on the government.

Based on true events of the Holocaust, Stephen Unwin’s momentous modern-day morality play All Our Children, making its American debut at The Sheen Center after a critically-acclaimed engagement in London, presents a fictionalized account of one such facility that committed these Nazi horrors, and of the real-life cleric Clemens von Galen, Bishop of Münster, who courageously intervened. Under the threat of his own execution, he gave sermons, which were printed and illegally distributed, and met with members of the SS, in an attempt to stop the killings. Known as the “Lion of Münster,” von Galen was elevated to the rank of Cardinal by Pope Pius XII in 1946, and beatified by Pope Benedict XVI in 2005, for his denouncements of that and other Third Reich policies, including the arrest of Jesuits and the confiscation of Church properties.

Unwin’s narrative is set in 1941, on the evening of January 6 (the Feast of the Epiphany – the “manifestation of divinity” in the Catholic liturgical calendar), at a clinic for disabled patients under the age of 25, in Winkelheim, Germany. Inside the offices, the invented characters (two of the institution’s administrators, the maid, and a mother of one of the patients) and the visiting Bishop present their divergent perspectives in imagined conversations and angry clashes, disclosing their backstories and their personal, ideological, and ethical beliefs and concerns about the value of life and the state-ordered “mercy killings” of the innocents, done, according to the Nazis, “for the common good.”

Directed by Ethan McSweeny with a clear and steady hand, the tension grows and the sides are drawn, as truths are uncovered about the center and its mission, and the characters come to terms with their respective complicity and individual morals and conscience. Tony Award winner John Glover stars as an intelligent, compassionate, and brave von Galen, who remains even-tempered and rational in his arguments, but resolute in his convictions and determined to effect a change. His portrayal bespeaks the dignity, commitment, and integrity of the man who does what he does “because it’s right” (while also subtly acknowledging that his actions were selective, never having spoken out publicly in support of the Jews or other victims of the Nazis). In contrast, Sam Lilja spews hatred, contempt, and disgust as the merciless Nazi Administrator Eric Schmidt, the institution’s Deputy Director who callously oversees the orders to send patients off to their deaths with chilling remorselessness. He is indifferent to the pleas and suffering of the mothers he encounters, threatening to his colleagues, and unwavering in his fanatical dedication to the heinous ideals of the Aryan Nation.

In his revealing interactions with the two antithetical characters, Karl Kenzler shows a developing awareness and regret in his role as the clinic’s Director, Victor Franz, an ambivalent unmarried and childless doctor and expressed atheist who follows Nazi orders and recites the party line to those who question or object to the murderous policy. But he also drinks, smokes, and coughs to excess, recalls his motivations in becoming a physician, and begins to re-evaluate his compliance in the execution of the people he had intended to help. His conflicted portrayal reveals the internal debate of a man who knows his own position and life will be at risk if he disobeys orders, but might not be able go on living with himself if he doesn’t.

Jennifer Dundas turns in a heartwarming performance as Martha the maid. She is caring and efficient, a maternal presence and devout Catholic who worries about her own fifteen-year-old daughter doing what’s “natural” too soon and comes to recognize that there should be universal love and kindness for “all our children.” Rounding out the outstanding cast is Tasha Lawrence as Elizabetta Pabst, a hardworking impoverished widow of WWI and the loving mother of an epileptic son committed to the clinic. Her demeanor changes from nervous and thankful to devastated and outraged, when the rumors she’s heard about the facility prove to be true and she holds Dr. Franz (unable to empathize with the profound feelings of parental love) accountable.

Period-style costumes by Tracy Christensen define the characters and evoke the era, as does the sound design by Lindsay Jones, with classical music and German newscasts heard over a vintage tabletop radio. The production’s in-the-round design (set by Lee Savage) is up-close and intimate, with warm and tasteful antique furnishings that contrast with the high rows of grey metal filing cabinets behind, containing the records of the children who’ve been gassed, or are soon to be. And McSweeny’s compelling direction keeps the actors moving, as our eyes follow them in and out and around the room with rapt attention.

A heartfelt tribute to the people who suffered and died (Unwin is the father of a disabled child, so the theme is a very personal one for him), and to those who stood up, raised their voices, and bravely objected to the abhorrent program of murder when the majority of citizens didn’t, All Our Children is a gripping reminder of the realities of the Holocaust and the need to speak up against discrimination and persecution whenever and wherever we see it. 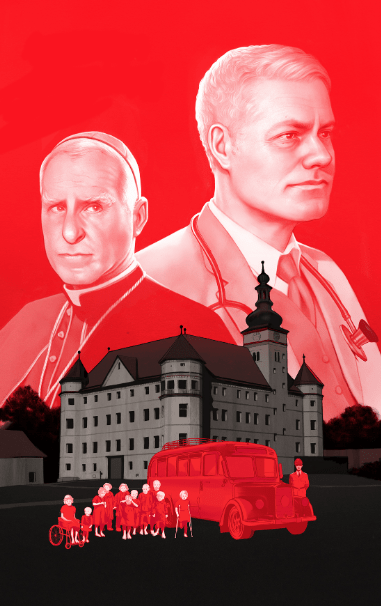