Arlington’s Gunston Arts Center was the place to be on Saturday night. Always a joy to hear the National Chamber Ensemble which delivered joy with its season finale concert of contemporary compositions together with the Bowen McCauley Dance Company.

Samuel Barber’s “Sonata for Cello and Piano Op. 6” opened the program. Cellist Steven Honigberg was emotive, chilling and comforting at the same time perfectly balanced by the powerful but sensitive playing of pianist Carlos César Rodriguez. It was interesting to hear the music of the young Samuel Barber.

The Bowen McCauley dancers, Alicia Curtis, Mackenzie Rawls, Eve Holes Varner, Patrick Green, and Justin Metcalf-Burton, delightfully blended the music of Stravinsky’s Suite Italienne to body movement. The composition based on the music of late-Baroque Italian composer Giovanni Battista Pergolesi features a series of dances and presents a whole palette of moods. Dressed in unusual attire, it’s hard to determine what was more attractive, the dancers or the music, with the violin and piano attractively placed stage left and played with great finesse by Sushansky and Rodriguez. The choreography by Lucy Bowen McCauley was both tasteful and charming as well as being executed with great precision by the company. Witnessing the combination was exhilarating.

After the intermission was a honeyed piece by Victor Herbert, “Yesterthoughts” performed sweetly by Honegberg and Rodriguez. Herbert was born in Ireland, but spent most of his time as a cellist and composer in New York City.

Alberto Ginastera’s “Malambo” followed with Carlos César Rodriguez showing off his piano virtuoso chops as well as an excellent sense of building the work to its explosive conclusion. The work has distinctive rhythms that self-combust. It’s jazzy in a good way.

Next were fresh retakes on two all-American songs from George Gershwin’s Porgy and Bess, splendidly interpreted by violinist Leo Sushansky and pianist Carlos César Rodriguez. Sushansky has a great ear for phrasing and Rodriguez responded accordingly adding to the nuanced performance.

The National Chamber Ensemble made a breakthrough with its video command and an exciting crossover performance. The final composition, a world premiere for a classical trio and a computer-generated audio track and video effects was spectacular. Alexander Goldstein spent a few weeks composing the music for “Introspective Trio” and spent two years devising the dazzling video. It was exhilarating watching the live performance perfectly meld with both the audio and video not unlike an MTV video brought to life. In the second part of the trio, the angelic choir vocalized as the live instruments soared above. It was a stunning way to end the program,

If you’re into classical music, you must put the National Chamber Ensemble’s concerts on your schedule. 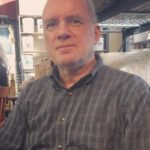