Rose Hovic is one of the most riveting characters in the history of musical theater, inspiring allusions to the most renowned figures in dramatic literature. Gypsy’s lyricist, Stephen Sondheim (the book was by Arthur Laurents, with music by Jule Styne), called her a “showbiz Oedipus.” Bernadette Peters, one of the host of Broadway leading ladies who have taken on the role, once described the experience as  “King Lear with music.” Sondheim comments in Finishing the Hat that Rose, a deeply self-deluded woman, is filled with obnoxious indomitability, unstoppable self-confidence, and a total absence of self-censorship. She is a magnificent challenge for any actor playing her.

In St. Mark’s Players’ current production, Carla Crawford meets the challenge. Crawford takes Rose, like any great role susceptible of many interpretations, in the direction of someone pursuing her goals not just with unrelenting determination but with charisma and charm, not to mention knowing use of her sex appeal. Crawford’s Rose is able to carry the audience, no less than the other characters, on her wild ride toward stardom for her daughters.

Rose’s vocals range from the angry, determined “Some People” to the gently seductive “Small World” to the team-building exercise of “Together Wherever We Go” to the climactic “Rose’s Turn,” the classic “11 o’ clock number” that Patti LuPone thought of as “a nervous breakdown set to music.” Crawford hits the right vocal and emotional tone for each of these varied pieces.

Just prior to “Everything’s Coming Up Roses,” the show’s iconic number, Rose is for once speechless, stone-faced in reaction to her vaudeville act’s apparent demise. Her awkward daughter Louise (Jillian Frankel) and long-suffering boyfriend Herbie (Sidney Davis) rejoice at the thought of finally getting off the road and having a normal life. When Rose turns the tables, insisting on making Louise a star, unblinkingly crushing her hopes, Rose’s nominally uplifting trumpet of a song is most important as a dramatic frame for Louise’s stricken, wordless, uncomprehending, horrified reaction.

The first act’s Louise is a wistful girl with little confidence, best expressed in “Little Lamb.” But Louise gains confidence in the rapid-fire strip scenes as the newly-minted Gypsy in the second act, and Frankel’s characterization gains real heft in the dramatic confrontation that follows with her mother. Frankel earlier combines with Taylor Capizola, as Louise’s sister June, in probably the best rendition I have ever heard of “If Momma Got Married.”

Davis’ Herbie, whose large, shambling physical presence contrasts with his self-admitted personal weakness, does more than simply portray a man who Rose dominates. He shows how his kindness enables Rose’s control of the young people in their charge.

The adults (who play several roles) and children of the supporting cast give an effective performance. One of the dance highlights of the evening is Nina-Sophia Pacheco’s tap solo in a pants role as Tulsa in “All I Need Now is the Girl.” Another notable moment is the trio of brazen, rather sweet, strippers (Samara Strauss, Andrea Trent, and Rebecca Kendall) who display the tricks of their trade for Louise in “You Gotta Have a Gimmick.”

Katie Ganem makes a strong imprint on the production in her roles as director, choreographer, and set designer/decorator. The set centers on a false proscenium, covered by a dark-colored scrim behind which Sam Strenecker’s excellent orchestra sits, with the main playing area in front occupied by a mobile collection of crates and costume racks suggesting an old theater, along with a ”ghost light” that Rose turns on at the start of the show and off at the end (similar to what Sondheim describes as the setting for his writing of “Rose’s Turn”).

Ganem makes two interesting, successful choices to start and finish the show. The overture is choreographed, with the cast moving the various set dressing pieces around, establishing the atmosphere of a theatrical world in flux. During “Rose’s Turn,” normally performed by Rose alone, on a bare stage, ensemble groups on either side appear to listen, while June, Louise, and Herbie appear behind the scrim as she speaks to them in her mind. This captures a bit of original director/choreographer Jerome Robbins’ concept of making the scene show Rose confronting people from her past. Keeping Louise/Gypsy, now a star, behind the scrim for the subsequent brief dialogue scene with her mother leaves unclear, perhaps intentionally, whether their conversation is real or just one final instance of Rose’s self-delusion.

The need to distinguish actors who play several roles keeps costume designer Fiona Meagher busy, and she manages the task well. The quick changes needed for Gypsy’s rapid ascent through the ranks of burlesque are especially noteworthy, as are Rose’s outfits, some quite glamorous, a far cry from the dowdy look given Ethel Merman in the original production 60 years ago.

Subtitled “A Musical Fable,” Gypsy never purported to be a factual biography of Gypsy Rose Lee, who herself prized a good story over a true story. But it is a genuinely great show, and St. Mark’s production captures both the entertainment value and strong character portraits it offers. 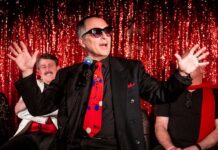