There is something very “meta” about Gala Hispanic Theatre’s production of Fame. See, you’ve got this group of scrappy young artists with talent, so much talent. And they are determined to show the world that speaking a different language or coming from a background you might not understand doesn’t mean they can’t accomplish all that you can or more.

But am I talking about the characters portrayed in Fame or the actors and creative team that put the show together? The answer is both, and it’s precisely why this production of Fame, the story of high school students training at a famed New York performing arts school, is one of the best productions I’ve seen all year.

As director and choreographer, Luis Salgado is the heart and soul of this production. Fame marks Salgado’s triumphant return to DC after winning last year’s Helen Hayes Award for directing GALA’s In the Heights. “There are many directors with talent,” one audience member said to me after seeing the show the other night. “But Luis directs from the heart.”

That spirit is apparently contagious and Salgado and Music Director Walter “Bobby” McCoy have assembled a team of performers with so much talent and so much heart that it is impossible not to root for them.

Sure, Fame is a fun story, with loveable characters who are easy to root for, but what makes this production truly stand out is the cohesiveness of the artistry. This is one of those rare theatrical experiences where the components meld so fluidly that you sit entranced by the magic unfolding before you. Salgado’s choreography is so crisp, so vivid and alive, that the excitement pulsates off the stage and straight into your heart. His direction is so clear and concise that the entire team is united in one shared purpose.

The performers, as a group, are at the top of their game, triple threats able to precisely execute Salgado’s vision. The lighting (Christopher Annas-Lee) takes it all to the next level, whether uplighting a single determined face, or offering pulsating glimpses of dancers’ intertwined bodies in a club scene. Clifton Chadick’s scenic design places us squarely in a New York City school and then dumps us out onto New York’s gritty streets.

As for the show’s dual languages (English/Spanish): I believe that experience is determined by each audience member’s willingness to open themselves to something a little bit different. It can be a new experience, even for speakers of both languages, to wrap one’s head around the shifts from Spanish to English. The surtitles are helpful but placed to the sides of the stage so that one must pull their attention away from the actors to read them. Between the shifting and the listening and the reading, there is a significant amount of mental processing involved for anyone who isn’t fully bilingual. But the beauty of this production is that it has a simple and familiar storyline that immediately bonds you to the characters. The dance numbers feature such precise and jaw-dropping choreography that one only need be a master of one language: The language of acceptance. My husband – who speaks ni una palabra de español – sat entranced.

Several performers deserve recognition for their specific contributions. Romainson Romain portrays Tyrone Jackson, the jaded breakdancer whose skills are so great that his teachers work hard to ensure he overcomes other limitations. Juan Luis Espinal and Paula Alejandra Calvo share a tender and tragic bond as Schlomo and Carmen, and Alana Thomas (Mabel Washington) is adorable as she struggles to balance her love of food and her desire to dance.

The theme of hard work – “dar mas” – runs through Fame and it was not a coincidental choice of material for a creative team that works hard to stake a claim a country that often discounts the contributions of minority populations. As Salgado pointed out in post-show comments from the stage, “As a minority community we keep working hard to prove to those who say we can’t that yes, we can.”

GALA’s production of Fame sets the bar high for artistry onstage and off. 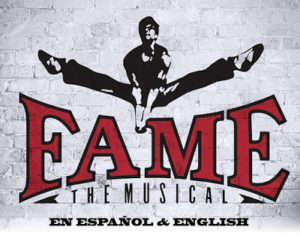 Running Time: Two hours and 20 minutes including one 15-minute intermission.

Fame the Musical is based on the 1980 musical film of the same name.