In the Devine black box theater at Georgetown University’s Davis Performing Arts Center, nine casually dressed undergraduate students, seated in chairs or on the floor take turns telling the story of how they acquired their footwear, why, and what it means to them, through an association of friends, family, and fashion trends. The shoes are the operative metaphor for In Your Shoes, a devised piece created by students from Washington, DC’s Georgetown University and Patrick Henry College in Purcellville, Virginia.

Georgetown is a large, internationally known university, established in 1781 by members of the Jesuit order. However, as an urban university engaged with the larger world, today, most students are not Roman Catholic and conservative Catholic activists and pundits have criticized the university and its students for a perceived lack of adherence to Church teachings. By contrast, Patrick Henry is a small non-denominational Christian college founded in 2000 that requires both students and faculty to sign a Statement of Faith informed by Evangelical Protestant theology, which includes doctrines on sin, salvation, and creation.

The two schools would seem to be on opposing sides of a schism going through American political culture today ranging from the role of religion in public life, science in public policy, reproductive rights, the rights of LGBTQ people, and living in a pluralistic society.

The project that drew them together began with Daniel Brumberg, a professor of Government at Georgetown, and co-director of the program of Democracy & Governance where he studies policies meant to foster democracy and human rights in the developing world. Brumberg found his attention turning from his main academic focus on the Middle East to the increasing polarization in American society. But with this polarization manifesting not just in political rhetoric but in how Americans consume both social media and mass media, Brumberg needed to find a method for engaging people in face-to-face encounters. To this end, Brumberg teamed up with Professor of Theater and Performance Studies Derek Goldman.

Goldman – no stranger to District theater audiences – has a background in promoting dialogue. In 2012 he and former Ambassador Cynthia Schneider co-founded Georgetown’s Laboratory for Global Performance and Politics, which, building on Georgetown’s tradition of training future diplomats, engages the performing arts with divisive issues in other countries, both by hosting international artists and having students engage with controversial foreign plays.

Even in an academic setting, a collaboration between the fields of the performing arts and political science may seem strange: At many large universities, theater training is often done at conservatories that operate in near isolation from the larger liberal arts curriculum, with theater students often times receiving little to no education in history, philosophy or the sciences. 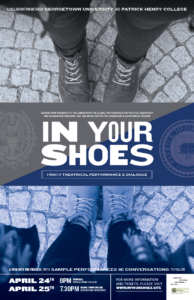 In order to refocus from foreign affairs and towards our American society, Brumberg and Goldman needed to find a partner at a school guided by a significantly different educational philosophy and faculty member to partner with. The ideological polarization in American society correlates to demographics: Liberals and conservatives rarely engage with one another simply because they do not live in the same communities to the same extent they did in past decades.

The catch was not just to find a willing partner at a conservative institution, but one within driving distance that would make an ongoing institutional relationship possible. They found their partner at Patrick Henry College: Cory L. Grewell, a literature professor who has published on Owen Barfield and J.R.R. Tolkien and who directs the student drama club.

At the beginning of the 2018-2019 academic year, a self-selected group of students at each school (only a few of whom had substantial theater experience), began to meet one Saturday a month. Goldman led them in theater exercises: Pared with their counterparts at the other school, they would mirror each other’s movements, observing vocal and gestural idiosyncrasies: Basic technical training for actors that is not overtly political.

The aim was not to stage a debate, formulate a counter-argument, or to represent the other as a caricature, but to identify, at its core, what each individual believed, valued, feared.

But then came the heart of the project. Using prompts, the students were tasked with active listening: Each recording the other telling his or her story. They discussed their values and their anxieties, pivotal experiences in their young lives.

As students gained greater familiarity both with these exercises and with one another, they began transcribing these conversations and editing these statements to their essentials. The aim was not to stage a debate, formulate a counter-argument, or to represent the other as a caricature, but to identify, at its core, what each individual believed, valued, feared, and what left them with uncertainty.

A student from Georgetown gave an account of having to code-switch, that is, varying her mode of communication in response to how different groups perceive her biracial background. A student from Patrick Henry mused about issues of cultural appropriation stemming from how her Protestant family attended services at a congregation of Messianic Jews (a syncretic religious movement not recognized as Jewish by the majority of the Jewish community).

In another pairing, a Patrick Henry student voiced her vexation on how to emotionally navigate her religious understanding of homosexuality as she develops a friendship with a Georgetown student who identifies as lesbian, expressing genuine concern with being true to her own beliefs without being judgmental.

These discussions may foster greater respect for pluralism, and greater respect for the contradictions that individual and every community contains within. However, perhaps because I am older, and have not been part of a college community in many years, it seems strange that with the increase of violence against LGBTQ people, against people of color, as well Jews and other religious minorities, occurring in American society, the specter of violence received no mention – especially since violence is the phenomenon of societal breakdown that the democratic ethos seeks to avoid.

The April 25th performance that I attended was less a show than a demonstration of these techniques as a means of fostering dialogue between ideologically and culturally different groups, learning to recognize, understand, and then represent the other, in both authentic differences and authentic commonality.

In a question and answer session after the show, the students stated an eagerness to maintain the friendships that had formed over the course of the project, and even repeat the experience if possible.

Brumberg, Goldman, and Grewell are facilitating a different sort of politically engaged use of art: teaching how to listen and understand what is important to another side, how to live side by side, to further a democratic ethos. It is a project that succeeds because they have found willing participants on both sides.

One hopes that a project such as this can be replicated by future professors and administrators who can guide an institution to reach across the divide to their counterparts and students who are willing to participate. A common willingness to coexist side-by-side has to be a prelude both to working together and to respectful disagreement.

There will be more questions to ask, but only if we take a few steps in another’s shoes.

For more information about the joint In Your Shoes project of Georgetown University and Patrick Henry College, go online.