Responding to the mass shootings in El Paso, TX and Dayton, OH on August 3 and 4, songwriter Amanda Palmer dropped a single last month called “Everybody Knows Somebody.” The song’s premise is that the nation may finally pull together on the issue of gun control as, massacre by massacre, we all come to know “somebody who got shot.” With these mass killings occurring on the regular, it’s only a matter of time, right?

Some people replied to the video Palmer released with the song – a charming me-to-you conversation recorded at her home on a cell phone – saying they hadn’t yet been touch by the gun violence epidemic. I am genuinely pleased for their good fortune, but I don’t share it. I thought I’d remove a degree of separation for those who have thus far been spared, so we can get on with the coming together to fix this thing.

Everybody may not yet know somebody, but I knew Wendi Winters. Not nearly as well as I would’ve liked, though. Isn’t that how it goes? When someone’s gone, you hear the appreciative outpourings from people whose lives they impacted and you realize you only knew a small part of them. You want to know more, but it’s too late. We really should celebrate each other more while we can. Wendi knew that. It’s actually how I met her.

I was Managing Editor at this publication for a bit while Wendi was one of our reviewers. We were lucky to have an award-winning, veteran journalist like Wendi on staff. She was such a good writer, her work was super easy to edit. She was a total pro and a pleasure to work with. Her reviews were honest, upbeat, and respectful of the hard work and talent that go into making art. And always in by deadline.

DC Theater Arts was her side gig; her main job was at the Capital Gazette in Annapolis, MD. On June 28, 2018, thirty minutes after she’d walked the subject of her next (ultimately unwritten) “Teen of the Week” column out, a white man in his 30s with a shotgun and a grudge against the newspaper shattered the glass door of the newsroom the where Wendi was working.

According to witnesses who credit her with saving their lives, Wendi, who had recently attended an active shooter training at her church, charged the gunman with her trash can and recycling bin. The distraction slowed the assailant enough to help coworkers, unable to exit the barricaded back door, to shelter and hide. Six of the 11 people in the office survived.

Wendi Winters was 65 years old when she died. She had four children in their 20s, three of whom are Navy officers, and an active life that included writing 250+ articles a year and volunteering at her church, the Girl Scouts, and the American Red Cross as a donor and organizer.

In the lyrics to “Everybody Knows Somebody,” Amanda Palmer uses the simile “like the blood that flows through every color body” to describe the unifying nature of our shared loss. Blood can also be literally unifying. In its report on Wendi’s memorial, The Washington Post quoted her son, Phoenix Geimer:

She gave her heart, her last breath and her final eight pints of blood in defense of a free press and of her family at the Capital.

In the decade preceding that sacrifice, Wendi donated 11 gallons of the life-saving fluid. Geimer suggested to the hundreds of assembled mourners that if anyone there had received blood during a hospital visit, there was a good chance some of Wendi’s blood was flowing in their veins.

I like the notion that a hero’s blood was given to those in need. But really, that’s always the case. The Third Wendi Winters Memorial Blood Drive happens Saturday, September 7, at the Crowne Plaza Hotel Arundel Ballroom.

Posting her video, Amanda  Palmer said, “I’m not a politician, or a cop, or a survivor, but I am an American, and a mom, and an artist. This is what I can do.” Honor Wendi. Be a hero. Do what you can do.

Everybody knows somebody. Now you know Wendi Winters. 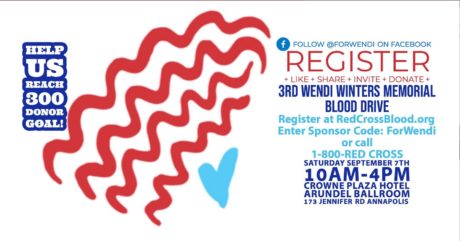 In juxtaposition to its sobering subject, the catchy, up-tempo song is performed on ukulele and features a bona fide sing-along chorus. It’s a powerful song and it supports a worthy cause. The graphic art for the single was created by Manuel Oliver, father of Joaquin Oliver, one of teens killed during the Marjorie Stoneman Douglas high school shooting in Parkland, FL. One hundred percent of the profits from the downloads of the studio recording of “Everybody Knows Somebody” on Bandcamp  ($1 / pay-what-you-want) go to CHANGETHEREF.ORG, a non-profit Manuel and Patricia Oliver cofounded to honor their son.

Four other Capital Gazette staff members died in the shooting. They were Rob Hiaasen (59), Gerald Fischman (61) and John McNamara (56), and Rebecca Smith (34).

Since Amanda Palmer posted her video, 73 people have been killed or wounded in mass shootings in the United States, including the attacks in Odessa and Midland, TX on August 31 where 8 were killed and 25 injured.