Midway through this taut, fraught drama about sexual trauma, a woman named Ana, a wife and young mother, is suddenly triggered. We are not told exactly why. It might be the Kavanaugh hearings broadcast, which she has just turned off in disgust. It might be the #MeToo zeitgeist, the rising tide of righteous rage. Whatever the precipitant, Ana is seized by a retrieved memory of  what happened to her when she was a child of six. Until she was nine, she was molested by her babysitter, her uncle. And she passes out.

Melissa Hmelnicky, whose deeply affecting performance as Mom Ana is the story’s emotional anchor, comes to in the arms of her supportive husband Jon, played attentively by Christian Sullivan. The graphic details of Ana’s abuse are artfully and tactfully depicted. Madelyn Farris as Child Ana plays innocently with her dolls stage left as an unctuous male voiceover (Sullivan again) makes her promise never to tell. Meanwhile Hmelnicky on her knees as adult Ana stage right tries to communicate acceptance to her vulnerable and victimized young self.

The moment when grownup Ana and Child Ana bond across their lifetime of buried pain is one of the most exquisite scenes of human mercy I have ever seen on stage.

The persistence of trauma from sexual abuse is the timely theme of I Am Her, a first play by Amanda Moskowitz. The work is autobiographical, a fact that’s a large part of its impact. After experiencing her own sudden-onset memories of childhood sexual abuse, Moskowitz decided to utilize the creative process of theater to heal—herself as well as others. Judging from the rapt reception by the audience who witnessed the performance Friday night in the Rehearsal Room at Woolly, that transformational potential has only just begun.

The three actors begin in half light by unpacking their costumes from a wooden box. Only later does one realize this is figuratively a play of unpacking memories. The first scene takes place in high school, where giddy High School Ana (Farris) crushes on a jock named Mike (Sullivan), of whom it is said “You can almost smell the popularity!” For Ana, however, it turns into a bad romance with an aggressive jerk whose anger she accedes to—in what is basically a date rape.

We know we are in for a sequence of successive sexual traumas by the next scene, when Career Ana (Hmelnicky) ill-advisedly sleeps with a co-worker, Jay (Sullivan, in another of his persuasive toxic-man impersonations). After Ana ends their affair, Jay retaliates. In a consultation with an employment lawyer, Joseph (Sullivan), Ana is unsympathetically advised she should forget about suing for hostile work environment and instead just resign—for the sake of her professional reputation.

That same undermining motif appears when Ana’s Father (a bespectacled Sullivan) tells Child Ana (Farris) she must never tell her mother what happened and there must be “no cops”—because “You don’t want that kind of reputation following you around.”

Other incidents in Ana’s life dramatize the complexity of sexual trauma—especially how she is made to feel responsible for what a man did to her and how she gets further blamed for her shame. Attuned to her suffering, we hear her haunting lines of self-reproach:

And in admiration we attend to this author’s brave declaration through Ana of her truth.

I Am Her promised

The night I was there, Producer Mimi Brodsky Kress talked with special guest Thomas Manion, director of the Montgomery County Family Justice Center in Rockville. If one knows or loves someone who has survived sexual abuse, Kress asked, what should one say? Manion’s answer was immediate:

I’m here for you. I support  you. I believe you.

Amanda Moskowitz’s I Am Her eloquently and succinctly says that too. 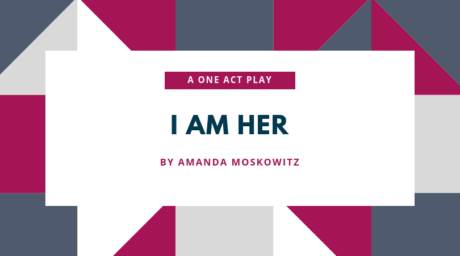 I Am Her played October 3 to 5, 2019, as a self-produced production in the Melton Rehearsal Hall at Woolly Mammoth Theatre Company, 641 D Street NW, Washington, DC. For news of future productions, follow I Am Her on Facebook and Twitter (@IAmHerPlay1).