Although Tennessee Williams’ rare romantic comedy won the Tony Award for Best Play when it made its Broadway debut in 1951, followed by a fiery 1955 film adaptation starring Anna Magnani (who received that year’s Oscar for Best Actress), The Rose Tattoo is one of the iconic American playwright’s least produced works. Now back on Broadway at the American Airlines Theatre in Roundabout Theatre Company’s new revival (first presented at the Williamstown Theatre Festival in 2016), the current production, directed by Trip Cullman, goes full-out for the retro-laughs, and delivers many, centered on a fervid performance by the marvelous Marisa Tomei.

Set in a community of Sicilian immigrants on the New Orleans Gulf Coast of the mid-20th century, the narrative revolves around the lusty Serafina Delle Rose, a widowed mother whose passion for life and love is lost with the sudden brutal death of her virile (but deceitful) husband Rosario. Following his untimely departure, and after his devoted (and sexually boastful!) wife gets word of his widely known long-time extra-marital affair from two disgruntled locals, she becomes increasingly depressed and reclusive, and enforces a strict code of moral conduct on their fifteen-year-old daughter Rosa and her first crush Jack. But Serafina’s zest and vitality are rekindled by a fortuitous encounter with the truck driver Alvaro Mangiacavallo, who brings her out of her three-year state of despair and renews her ardent spirit, allowing the blossoming Rosa to do the same.

The play, to be sure, is a period piece, populated by dated stock characters with heavy working-class Italian accents that border on ethnic stereotypes, and women whose lives revolve around men and whose happiness is solely dependent upon being with a man. But Cullman’s comical take on the story also highlights the ridiculousness of hateful bigots hurling offensive epithets at the Sicilians, Serafina tenaciously struggling to remove the uncomfortable old-fashioned girdle that binds her (signifying the tight restrictions then placed on the female body), the younger American-born generation speaking in a Southern (not Italian) dialect, and the repeated appearance of animated children playing, screaming, and running around the village in colorful clothes (in marked contrast with the mourning women clad in black), showing that times change, life goes on, and the joy of it should not be lost with adulthood.

Tomei hits all of the extreme emotions that characterize the hot-blooded Serafina (a role Williams created with the Italian Magnani in mind, which she declined to perform in the original play because she felt her English wasn’t good enough at the time). Flawlessly nailing the accent (dialect coaching by Charlotte Fleck), excitedly talking with her hands, exploding in melodramatic bouts of crying and rage, sensually dancing and caressing her body, feverishly flirting and sparring with the equally torrid Alvaro, and touting her religious devotion and superstitious belief in mystical signs (including nods from her statue of the Virgin Mary and appearances of the titular rose tattoo), her performance is a tour-de-force that drives the humor and heart of the show. Emun Elliott provides the perfect match as Alvaro, in a sidesplitting portrayal that creates a no-holds-barred tone of slapstick, marked by spot-on timing and priceless facial expressions and body language. They keep the sparks flying in madcap scenes of their sizzling romantic encounters, which number among the comedy’s funniest and most cathartic segments.

Among the amusing characterizations by the large supporting cast are Carolyn Mignini’s sober and pragmatic maturity as the devout Assunta; Tina Benko’s condescending tone of contempt and entitlement as Rosario’s mistress Estelle Hohengarten; the flagrantly malicious and man-chasing demeanors of Paige Gilbert as Bessie and Portia as Flora; Burke Swanson’s palpably nervous innocence as Jack; and the aggressiveness of Ella Rubin’s Rosa, whose audacious temperament and sexual desire are clear reflections of her mother’s. A harmonious chorus of women villagers delivers haunting hymns and dirges (original music and sound by Fitz Patton), masterfully accompanied by Jonathan Linden on acoustic guitar, which punctuate the narrative and provide a telling backdrop to Serafina’s more unorthodox behavior.

Though largely engaging, some of the extended scenes begin to drag (most notably the encounters between the mother and daughter) and could pack more of a punch with some tightening. And the show’s artistic design is uneven. Costumes by Clint Ramos effectively capture the style of the era and the personalities of Williams’ characters. Exquisite lighting by Ben Stanton and projections by Lucy Mackinnon beautifully evoke the waterside locale and shifting times of day and night. But the set by Mark Wendland is not as successful, with an inordinately dense and overly absurd flock of plastic pink flamingoes in the background, and a confusing arrangement of the interior and exterior of Serafina’s house, which the cast must awkwardly navigate.

Some need of editing and an unsatisfying scenic design notwithstanding, Roundabout’s production of The Rose Tattoo offers fans of Tennessee Williams an opportunity to see one of his infrequently staged works, to experience its combination of passion and laughs, and to witness a stellar award-worthy performance by Marisa Tomei. 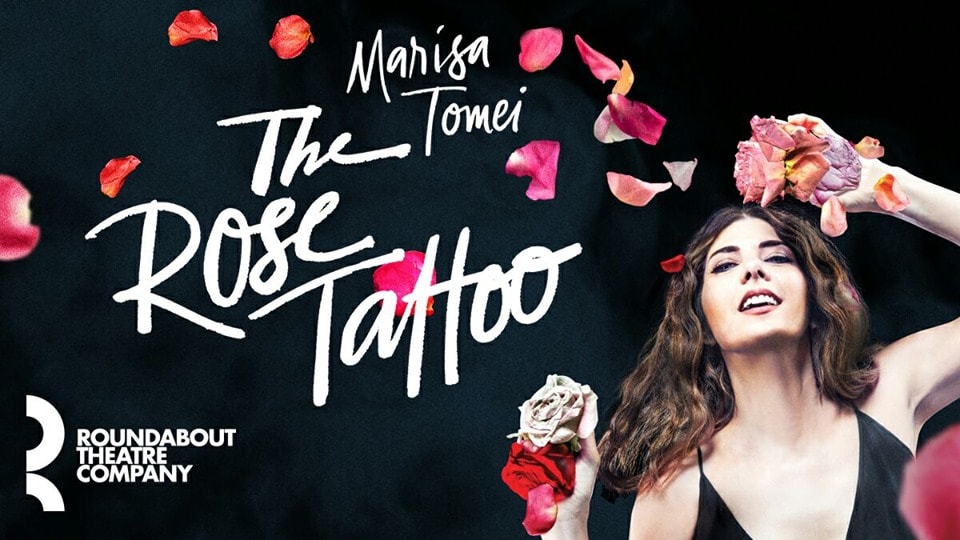