There’s really only one thing that all of us – that everybody – has in common. Death, whether we’re ready or not, will come for us. All our failures and triumphs, our relationships and desires, can seem meaningless in the face of this inevitability; perhaps that’s why it’s so scary. Death would seem to mock the importance of everything that makes life worth living. What then does it mean to succumb to death peacefully? And what dignity, if any, therein lays?

These are some of the guiding questions in Brandon Jacob-Jenkins’ Everybody, an ink-black comedy directed by Will Davis that kicks off Shakespeare Theater Company’s 2019/20 season. Jacobs-Jenkins, a MacArthur Genius Grant recipient and two-time Pulitzer Prize contender, is one of the most inventive, and ambitious working playwrights today, and in Everybody, he tackles the specter of death and its implications on the meaning of identity with his signature meta-humor and his affinity for high-concept resurrections of literary genres from days past. The results make for an irreverent and idiosyncratic night at the theater, yet for all the chances Everybody gets to unravel into something much deeper and more challenging, it blunts these efforts with an over-reliance on gimmick.

The play’s claim to fame? Five of the nine actors have no idea what part they’ll be playing on any given night, an admirable feat of dramatic flexibility, memorization, and surely some serious improvisation skills. The likelihood that the performance I saw on opening night will be different than any future performances are high – after all, the production boasts, there are 120 possible iterations, the combination of which is determined by a lottery ball selection on stage.

Everybody is based on the 15th-century morality play, Everyman, which anyone who has taken an intro level survey of Western literature in college will recognize. Morality plays are simple enough – they teach allegorical stories through the personification of abstract traits and values. Thus, the characters in play are things like Friendship (Elan Zafir), Stuff, or material wealth (Kelli Simpkins), Family (Ayana Workman), and Kinship (Alina Collins Maldonado). And then there’s Everybody (Avi Roque), who means to represent precisely, everybody, no matter what race, gender, or creed.

The play opens with a chatty usher (Yonatan Gebeyehu) emerging directly from the ranks of the audience. We’re told in a catty, but altogether amusing manner to turn off cell phones and put down our bags should one of these hiccups take us out of the dramatic moment. This shtick makes for an entertaining enough intro to a play full of moments of faux audience involvement (interactions with actors planted in the audience), but so, too, do these bits register as superficially imposed moments of sly humor. So much of contemporary theater seems to enjoy letting audiences know that the performance is aware it’s just a performance, and here it feels particularly à la mode rather than employed in any meaningful way. Ah yes, the audience IS everybody!

Thankfully the bulk of the play keeps to the stage. God assumes the body of Gebeyehu’s usher and decides to send Death (Nancy Robinette) to do his bidding. It’s time to bring some folks in to meet their maker! A group of humans appear on stage and are told by the cloaked, but oddly pleasant Death-figure that God needs them to deliver a presentation detailing the history of their lives. And in all likelihood, they’re not going back to wherever it is they came from. The crew naturally freaks out, and Death allows them the rare concession of going back and attempting to find someone, or something to accompany them on their journey. Everyone is terrified. From here the play selects its titular Everybody, who in my case was Avi Roque, an actor with the incredible ability to convey neurosis through a distinctive on-edge physicality.

Everybody visits Friendship, Kinship, Family, and Stuff — all of whom rightfully refuse Everybody’s pleas. Between each of these interactions, Everybody considers the value of these concepts they hold so dear, shedding their belief in their ultimate value while swiftly turning their sights on the potential comfort of another, thrillingly rendered as an interior monologue with Roque on stage mouthing and performing the words of their own recording. 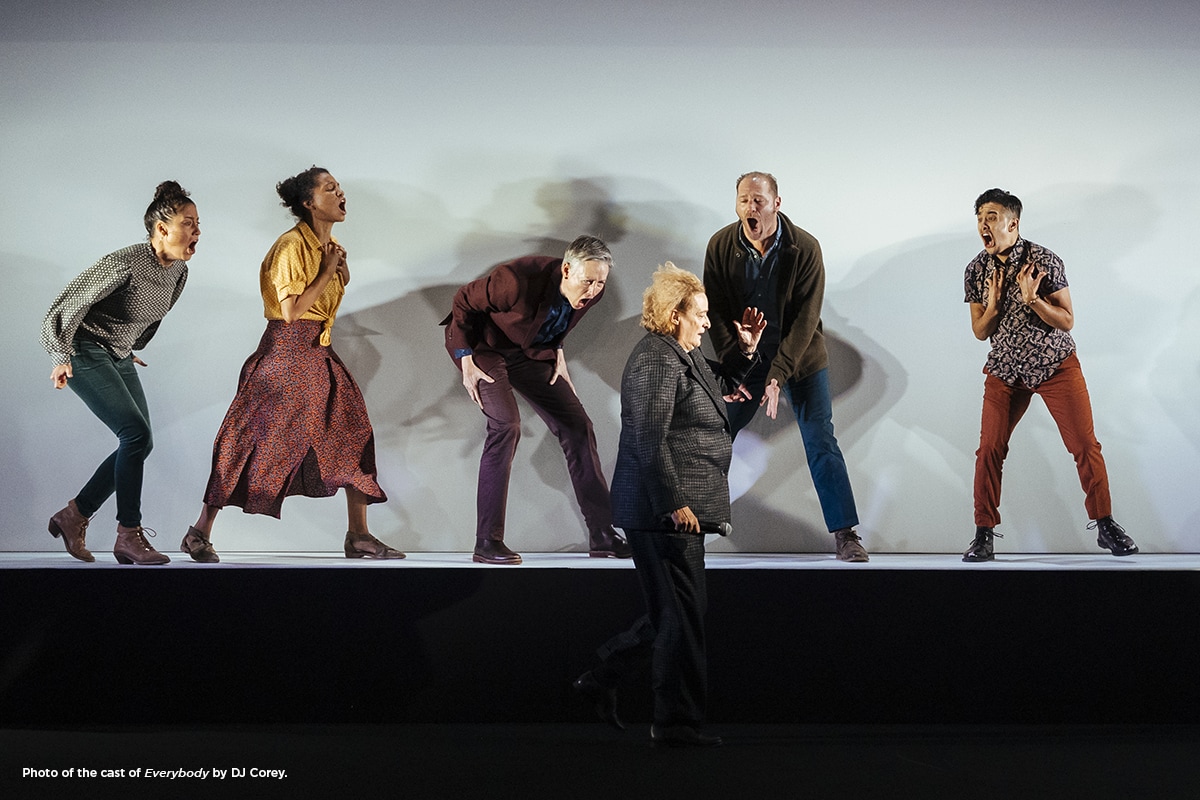 Everybody engages in conversation with the (also recorded) disembodied voices of people they know in real life, the sound of a beeping hospital monitor suggesting that it’s all taking place from a deathbed. Recounting the experiences we understand as the play itself, as the impressions from a dream the night before, Everybody gets into a spat with one of their visitors, who takes offense at one of Everybody’s racialized descriptions – mind you, of their own dream. Turns out Everybody is white (Roque is visibly not), and the offended party is not white (though he sounds it), which I suppose is one of the ways in which the play gestures at the slippery nature of identity, along with the casting roundelay. But for as much as Jacobs-Jenkins seeks to update the morality play with these modern questions, this race dimension feels shoehorned in and insufficiently explored. Part of the reason for this deficiency has to do with the play’s balancing of humor and drama.

As if pre-empting criticism of its inability to fully convey the scope of its ambitions, Everybody too often leans on winking comedic gestures of its own meaninglessness. When death comes, the color of your skin doesn’t matter – your beauty and intelligence and strength also fade into the background. This shedding of earthly traits is rendered in a kitschy, but delightful danse macabre sequence followed by a perilous, fog and pale-balloon-filled journey through presumably, nothingness. All of Everybody’s companions abandon them, save for Love (in a firm, but tender performance by Ahmad Kamal) and a prickly last-minute appearance by All the Shitty Evil Things (Maldonado again).

On the production side of things, the execution of these nebulous concepts on stage is a marvel to behold, but the effort translates into something much more heartwarming and endearing than the sting of the real deal. While the production’s vision is impressive, there remains a nagging “so-what” feeling to the whole thing, in part instilled by Jacob-Jenkins himself.

Running Time: One hour and 45 minutes with no intermission.

Everybody plays through November 16, 2019, at Shakespeare Theater Company — Lansburgh Theater — 450 7th St NW, Washington, DC 20004. Tickets can be purchased online or at the box office.