The winter holidays are a great time to see a live performance, so here is our list of best bets in holiday entertainment in and around DC. Whether you are looking for a show to enjoy with your kids, your friends, or your sweetheart, these shows will fill you with the spirit of the season:

A CHRISTMAS CAROL
Ford’s Theatre (DC)
November 21 – January 1
Tickets: $36-$109
A DC holiday staple. Sure, your local theater may very well be doing A Christmas Carol, but few theaters do it with the plush opulence of the Ford’s Theatre production. Catch many well-known DC actors, including Craig Wallace as Mr. Scrooge, who return year after year to bring the holidays to life with this seasonal favorite. Read our 2018 review.

SNOW QUEEN
Synetic Theatre (Arlington, VA)
December 3-29
Tickets: $19-$45
If you like jaw-dropping visuals with your holiday cheer, Synetic Theatre is the venue for you. Synetic, DC’s movement-based theater company tells classic stories with no dialogue but plenty of out of this world choreography and visual imagery. This holiday season, they will present a whimsical, family-friendly adaptation of Hans Christian Anderson’s beloved fairy tale, The Snow Queen.

STEP AFRIKA! MAGICAL MUSICAL HOLIDAY STEP SHOW
The Atlas Performing Arts Center (DC)
December 12-22
Tickets: $45
Step Afrika! steps up the holiday cheer with their Magical Musical Holiday Step Show. Stepping – the high-energy dance form that originated in African-American sororities and fraternities – meets holiday cheer in a family-friendly performance celebrating the spirit of wintertime with energetic beats and a special performance by DJ Frosty the Snowman. Children are invited to make drums and shakers with Step Afrika! 30 to 45 minutes prior to each performance.

L’ENFENCE DU CHRIST
The IN Series
Performed at Foundry United Methodist Church (DC)
December 7-14
Tickets: $21-$46 (Price is suggested donation)
Artistic Director Timothy Nelson believes that Opera should do more than entertain. Like all Nelson productions, L’enfence du Christ works to make audiences truly think about what is being presented to them. “In collaboration with Foundry United Methodist Church, Berlioz’s grand oratorio is uniquely staged as a community exploration of human migration and the power of hospitality to those fleeing persecution. Performed in the stunning Foundry sanctuary, this holiday-time performance seeks out the nexus of art, faith, and social justice to ask the most essential human question of how we offer kindness to the other.’ ”
IN Series Artistic Director Timothy Nelson discusses his approach to opera in this recent DCMTA interview.

TAYLOR MAC’S HOLIDAY SAUCE
The Kennedy Center (DC)
December 12
$39-$129
Who says DC is always staid and conventional? Not when Taylor Mac comes to town! The playwright, drag artist, and MacArthur “genius” grant recipient returns to the Kennedy Center with a show celebrating the disfunction of the holiday season. Mac will be joined on stage by longtime collaborators Machine Dazzle and a band of eight to offer a hilarious new take on the holidays. Read our review of Mac’s recent Kennedy Center performance ‘A 24-Decade History of Popular Music (abridged)’. 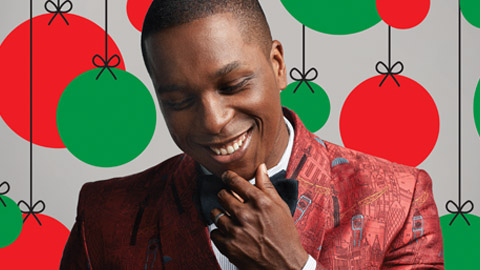 NSO POPS! A HOLIDAY POPS WITH LESLIE ODOM JR.
The Kennedy Center (DC)
December 13 and 14
Tickets: $29 to $109
Since Hamilton turned Leslie Odom, Jr. into a household name, he has released three albums including his recent release “Mr.” and an album of Christmas standards. Now he combines his talents with the Choral Arts Society of Washington in an event featuring songs from Odom’s albums, sing-along favorites, and even indoor snow in the festively decorated Kennedy Center.

A CHRISTMAS CAROL
Featuring Paul Morella
Olney Theatre Center (Olney, MD)
November 29-December 29
Tickets: $40-$50
For ten consecutive years, Paul Morella has wowed audiences with his own adaption of A Christmas Carol. In what is now an Olney Theatre Center tradition, audiences can “experience the unforgettable characters and vivid imagery as Charles Dickens originally intended – in his own words – and rediscover this timeless classic presented in a masterful solo performance. Adapted from Dickens’ original novella and reading tour, Morella’s solo version will transport you back to Victorian England and into the heart of this classic morality tale.”

PETER PAN AND WENDY
Shakespeare Theatre Center (DC)
December 3 – January 12
Tickets: $35 – $120
It’s not exactly a holiday-themed show, but we have read Lauren Gunderson’s new script and let us tell you, it’s a winner and a perfect family holiday adventure. Gunderson – known for being the most produced playwright in America, and for her scripts that feature strong, scientifically minded females – puts the female characters front and center in the Peter Pan story. Featuring onstage magic, Instagram-worthy sets, and empowered heroines, this show will leave audiences of all ages ready to embrace the magic of the season. 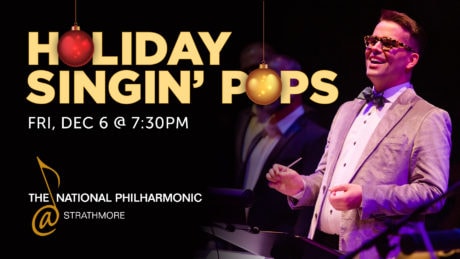 HOLIDAY SINGIN’ POPS
Strathmore (North Bethesda, MD)
December 6
Tickets: $29 – $69
The National Philharmonic Orchestra nearly closed last summer before an angel investor stepped in to save orchestra in residence at Strathmore. With holiday favorites and Broadway standards sung by Broadway-caliber performers and deft conducting by DC-favorite Luke Frazier, this holiday show will make audiences grateful that the Orchestra is still around. Come early to take a festive photo with Santa, decorate an ornament and hear young carolers.

MADELINE’S CHRISTMAS
Creative Cauldron (Falls Church, VA)
December 6-23
Tickets: $20-$30
Madeline’s Christmas has become a Creative Cauldron holiday tradition. In this musical adaptation, Madeline’s schoolmates and tutor are all sick in bed on Christmas Eve, unable to go home for Christmas. Madeline comes to the rescue with the help of a magical rug merchant and takes her friends on a Christmas journey they will never forget. Read our 2018 review.

THE CHRISTMAS REVELS: CELESTIAL FOOLS
The Washington Revels performing at GW’s Lisner Auditorium (DC)
December 7-15
Tickets: $12-$65
A perennial favorite, The Washington Revels have been performing their annual Revel – a celebration of the Winter Solstice – For 37 years. Each year, a cast of over 100 from ages 9 to 90 comes together to embrace the magic of the season. Led by the “Celestial Fools,” three wandering performers who tell stories from far-off lands, this year’s show promises to “lead us on a journey into the heavens to reclaim the light and restore its warmth to the world.” Read our 2017 review.

A CHORUS LINE
Signature Theatre (Arlington, VA)
October 29-January 5
Tickets: $40-$130
No holiday theme here, but enough glitz and pizzazz to leave you glowing like a Christmas tree. This production opened last week to rave reviews, so get your tickets while you can and enjoy a good old-fashioned (yes, it’s now old enough to be considered a classic) musical featuring the songs you know and love and reworked choreography by Denis Jones.

THE VELVETEEN RABBIT
Adventure Theatre (Glen Echo, MD)
November 15 – January 1
Tickets: $20.50 (General admission)
Can true love make impossible things real? This retelling of the classic children’s tale is sure to give you the warm fuzzies. Adventure Theatre’s adaptation of Margery Williams’ classic story was written by Patrick Flynn, one of the DC area’s rising playwrights and a recent winner of the Samuel French Off-Off-Broadway Award.

THREE KINGS DAY (FIESTA DE LOS REYES MAGOS)
GALA Hispanic Theatre (DC)
January 5
Tickets: Free!
Whether you are a newbie, curious to explore the traditions of Three Kings Day, or looking to embrace an old family tradition, experience the magic and splendor of the day at GALA Hispanic Theatre’s Three Kings Day celebration. Featuring the (bilingual) Magi, live animals, local performers, a walk through the neighborhood, and gifts for every child. This show is performed in English and Spanish.

SQUEAKERS AND MR. GUMDROP
Arts on the Horizon (Alexandria, VA)
December 5-21
Tickets: $10 (military discount available)
Geared toward children ages 2-5
Arts on the Horizon is run by a talented group of DC artists who truly love making theater for the youngest audiences. Squeakers and Mr. Gumdrop, written by company members Natalie Cutcher and Amanda Forstrom, introduces us to Mr. Gumdrop as he prepares for his annual holiday party. “When an unexpected and curious mouse appears, Mr. Gumdrop’s routine is thrown for a loop. Can these two wildly different characters work together to get the holiday preparations done in time?” The story is told entirely through movement.