Tony Kushner’s newly revised first play, A Bright Room Called Day, written and debuted during the presidency of Ronald Reagan in the 1980s, is back for our present time in an updated incarnation at The Public Theater. Directed by The Public’s Artistic Director Oskar Eustis (as was the original professional production in 1987), the piece of juvenilia by the highly respected and acclaimed Pulitzer Prize-winning playwright (who was 26 in 1985, when he wrote it) takes a heavy-handed approach to the old maxim “Those who do not learn history are doomed to repeat it,” in a long-winded rhetorical exercise of “preaching to the choir” – an audience comprised largely of fans of the progressive politically-themed programming for which The Public is known and appreciated.

Part history lesson, part political diatribe, part self-reflection, and part call to action, the play combines elements of fictionalized period drama, surreal appearances, recurrent breaks through the fourth wall, sardonic self-referencing wit, and pedantic philosophizing, with even a song thrown in (but thankfully no kitchen sink). The result, in serious need of objective editing, is an overly long, redundant, self-indulgent work that expresses the playwright’s own passionate viewpoint and agenda at the expense of a tight, cohesive, and engaging drama.

The central story of a group of artist friends in 1932-33 Berlin, experiencing and reacting to Hitler’s historic rise to power, would have made for an interesting and compelling study in human psychology, as would finding in it parallels to the popularity of the Reagan administration and the election and support of the current POTUS, which inspired the remount and revisions. And the driving issue of the socio-political role of artists, especially during such atrocious times, raises the significant question, Does art do enough?

But the meaningful narrative is broken by overblown political harangues, interminable pontificating, and running meta-theatrical interruptions of direct-address commentary by two post-modern characters. One, just added in the latest rewrites, represents the playwright himself, in the form of a laughably neurotic, distraught, and self-deprecating figure who not only explains the background of the play’s puzzling title, but also accurately anticipates the criticism of his own work – in essence writing his own review – in valid points with which I must agree.

“This play doesn’t work and never will;” “It’s never booked;” “It’s my first play. I wrote it 34 years ago;” “When I was like 26! I grew up;” and “I didn’t trust the play . . . to speak directly enough.” The other interrupter, a problematic alter-ego character he wrote in the ‘80s (“She doesn’t work,” he acknowledges), challenges him with, “You don’t need to say everything. Trust them (the audience) to get it! . . . You don’t even trust them to come back, that’s why you won’t let them go!” – as he delays intermission with yet another lengthy reflection that distracts from the development of the plot, reiterates what should have been clear in his script, and condescends to the audience, who most likely would get the obvious message without being beaten over the head with it.

Consequently, the cast is faced with the difficult task of trying to make the pedagogy entertaining and believable, as the friends decide if they should escape, organize, fight back, or wait for the crisis to pass, through unnaturally talky segments that identify who they are, what they choose, and why. Those include uneven performances by Nikki M. James as Agnes, a theater artist in whose elegant apartment the play is set (scenic design by David Rockwell), and who is hesitant to give up what she has; Michael Esper as her heavily accented Hungarian boyfriend Husz, who has already lost one eye in the growing tensions of the period; and Grace Gummer as the histrionic drug-addicted actress Paulinka.

They are joined in more consistently committed portrayals by Linda Emond as the artist Annabella, a dedicated activist who enlists Agnes’s help; Nadine Malouf and Max Woertendyke as Rosa and Emil, two ideologically conflicting representatives of the Communist Party; and Michael Urie as Gregor, a gay man who contemplates suicide to escape the wrath of the Nazis, but chooses self-preservation over self-sacrifice, in one of Kushner’s most gripping and thought-provoking scenes that lies at the heart of his theatrical proselytizing. The urgency of their actions is highlighted throughout the show by background superscriptions (projection design by Lucy Mackinnon) tracing the key dates and events in Germany’s rapid decline into Nazism.

As the interrupting playwright Xillah and his not-yet fully defined figure Zillah, Jonathan Hadary and Crystal Lucas-Perry bring the laughs and the gnawing frustration of struggling to work it all out (she also contributes a powerhouse vocal on “Memories of You,” with the relevant lyric “Why can’t I forget?,” accompanied by Hadary tinkling the keys of a piano that suddenly appears on stage). Mark Margolis makes for a triumphant devil (included in the play, according to Xillah, because every German story must have one), who celebrates his political victories of the past and present, as the flames of hell rage behind him, the ceiling tilts down, and the eyes of an infernal dog glow red in the darkness (all enhanced by Bray Poor’s sound design). And Estelle Parsons is unforgettable as the spectral presence of Die Älte, a mysterious old woman in white (costumes by Susan Hilferty and Sarita Fellows) who materializes through the window, eats ravenously, laughs eerily, and recites disturbing poetry in the glow of ghostly blue lighting (by John Torres) that evokes the inescapable haunting of the past.

The relentless call to take action against the politics of bigotry, hatred, and oppression before it’s too late comes across loud and clear in The Public’s updated revival of A Bright Room Called Day. But the question still remains, how can artists get their word out to those who need to hear it, beyond the like-minded people who have come to the theater to see a work with which they already agree? 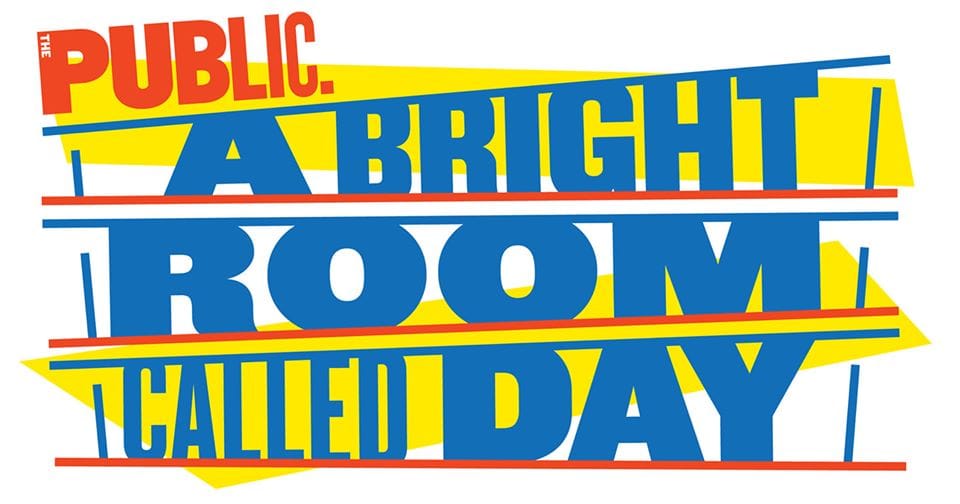