Cirque du Soleil’s first-ever Christmas show ‘Twas the Night Before . . . , making its debut at Madison Square Garden’s Hulu Theater, presents a sparkling contemporary spin on the beloved 19th-century poem with an exciting dreamlike journey into the traditional bedtime tale. Performed by an international troupe of amazing acrobats, dazzling dancers, and comical circus clowns, the all-new entertainment is chock full of family-friendly fun that provides a captivating holiday treat for all ages.

Written and directed by James Hadley, the revised vision follows the present-day adventure of Isabella, who has lost the spirit of Christmas, convinced that she’s too old for toys and for her father’s annual reading of the Christmas Eve story. When he becomes upset with her behavior and slams the treasured book closed, she is magically transported to the “Land of the Poem,” where multitudes of wintry characters come to life, entertain her, and rekindle her spark for the joy of the holiday.

An astonishing sequence of Cirque du Soleil’s signature circus arts (with acrobatic choreography and performance design by Edesia Moreno) is combined with high-energy segments of modern and post-modern dance (choreography by Vinh Nguyen Kinjaz) set to a soundscape of current versions of favorite Christmas songs and original music for the season (musical compositions by Jean-Phi Goncalves; sound design by Ben Scheff). It’s all presented before a bi-level glittering backdrop with clever movable props that suit the scenes (set and art direction by Genevieve Lizotte) and colorful lighting (by Nicolas Brion) that enhances the show’s radiant mood of beauty and excitement.

The talented company displays its extraordinary physical skills to Isabella, and to us, in solos, pairs, and groups, dressed in an array of adorable eye-catching costumes (by James Lavoie, with make-up by Maryse Gosselin) inspired by lines from the eponymous poem. They include everything from a buoyant herd of golden reindeer diving through hoops to wide-awake children in striped pajamas doing lively flips and somersaults on and off an acro table (both acts, which number among the production’s most exuberant highlights, performed by Quentin Greco, Jacob Grégoire, Chauncey Kroner, Timothé Vincent, Jinge Wange, and Evan Tomlinson Weintraub) to a group of Les Tuques (Jenna Beltran, Kalila Hermant, Samuel Moore, Paul Ross, Diana Schoenfield, and Bianca Vallar), named for the knitted caps and tassels they wear, breaking out in ebullient moments of youthful dance on stage and through the house.

There are hilarious bits of audience participation with Jolly the Clown (Francis Gadbois) imitating a variety of animals and four young boys (Ming-En Chen, Tsung-Ying Lin, Ting-Chung Wang, and Chia-Hao Yu) with glowing diabolos in flawless synchronicity; impressive block juggling (by the clowning Gadbois), disco-style roller blading (Rosie Axon and Adam Jukes), and supple acrobatics on a hotel cart (Katharine Arnold); and breath-taking high-flying routines on aerial lamp (Alexis Vigneault, as Isabella’s father), silks (Tuedon Ariri), and duo straps (Nicole Faubert and Guillaume Paquin), paired with exquisitely graceful balletic moves. And Isabella (Michele Clark), as witness to it all, ultimately rediscovers her sense of jubilation with a show-stopping display of her mastery of multiple hula hoops that hover in mid-air and emit a rainbow of hues, just in time for Santa’s arrival.

There is something to delight everyone in Cirque du Soleil’s ‘Twas the Night Before . . .’ Absolutely everything about it delighted me! 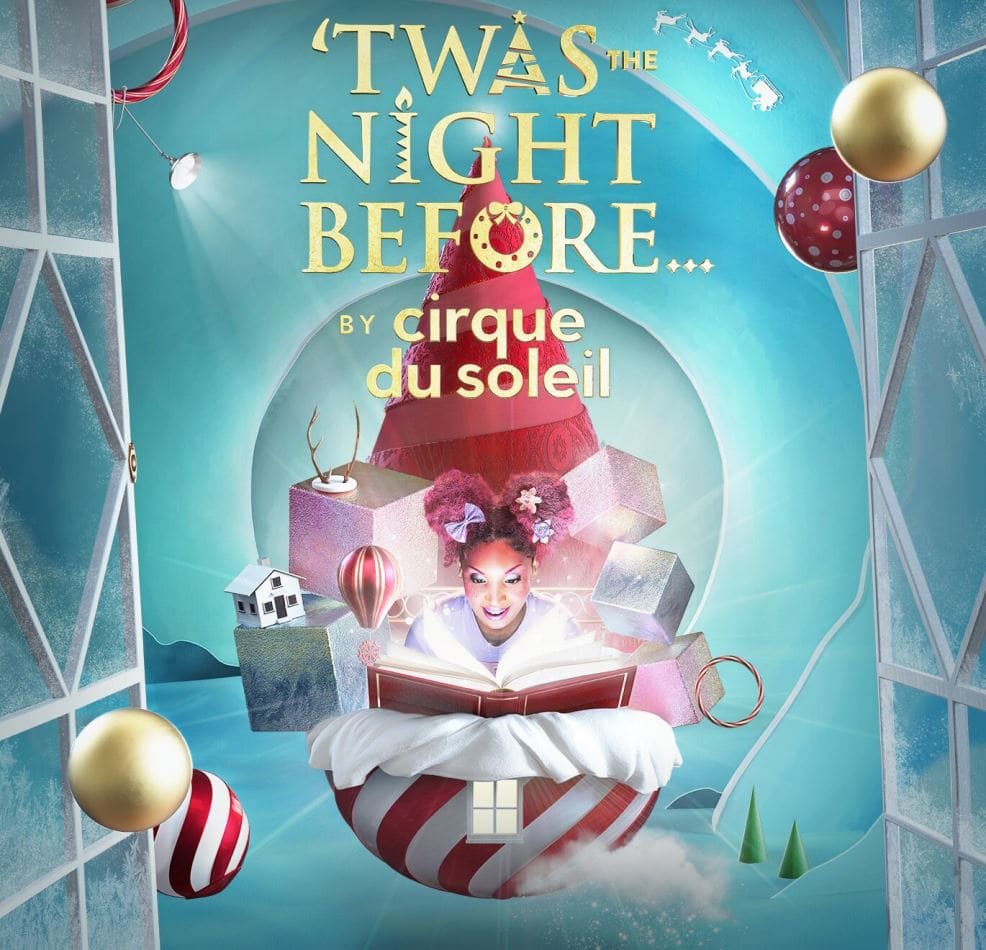