I’d say Deborah Zoe Laufer is having a bit of a moment right now, but it’s been going on so long I think it’s fairer to say she’s having a bit of an amazing career. Laufer’s plays have been produced at Steppenwolf Theatre Company, Cleveland Playhouse, Geva Theatre Center, Cincinnati Playhouse in the Park, Portland Stage, and the prestigious Humana Festival. Her ATCA Steinberg citation-winning End Days has been produced 70 times around the country, plus in Germany, Russia, and Australia, and the 2015 production of her Alfred P. Sloan/EST-commissioned Informed Consent at The Duke Theatre in NYC was a New York Times Critic’s Pick. Laufer has received awards, including the Helen Merrill Playwriting Award and the Lilly Award, and numerous grants and commissions from organizations such as The Alfred P. Sloan Foundation, The Edgerton Foundation, The National New Play Network, the NEA, and the Lincoln Center Foundation.

Friday, January 23, her acclaimed Be Here Now makes its East Coast premiere, with the playwright herself at the helm. Be Here Now tells the story of Bari, a misanthrope who has returned to her humdrum hometown after being fired from teaching Nihilism in New York. She starts having recurring headaches that endanger her health, but which also result in ecstatic, almost religious, experiences. Bari has to weigh her options – refuse treatment for a short life of love and joy or be cured of her illness, but also of all her newfound happiness. Did I mention Be Here Now is a comedy? Laufer has earned a reputation for excelling at dealing with serious, existential questions in seriously hilarious ways. The busy playwright kindly spent a few minutes answering some questions I had about Be Here Now and her experience at Everyman Theatre.

Patricia Mitchell: I understand you became aware of the phenomenon the character Bari suffers while listening to a podcast. Was that the spark that prompted Be Here Now?

Deborah Zoe Laufer: Yes – I heard a woman speaking about having Geschwind Syndrome – part of her temporal lobe was impacted by a tumor, and she was having powerful religious experiences for the first time in her life, and had found a kind of joy and understanding of the world that she’d never known before. When she had it removed she was devastated to have also lost that joy and sense of wonder. That’s exactly the kind of story I’m drawn to. I’m fascinated by questions of identity – what is personality? Is it based on genetics? Rearing? The sum of our experiences? Are we largely responding to chemical and electrical impulses? What does it mean to be human? And then, further exploring Geschwind Syndrome’s personality descriptors – hyper religiosity, hypergraphia, atypical sexuality, intensified mental life, and non-linear thought patterns, I thought – well, there’s an interesting character!

Seeing plays directed by their authors always feels like a special opportunity to see the playwright’s intent brought to life. How did you end up coming to Baltimore to direct this production at Everyman?

I’m friends with Noah Himmelstein, Everyman’s Associate Artistic Director. He was supposed to direct it, but then had a scheduling conflict. I’ve been directing my plays the past few years, and made, I hope, a gentle pitch for myself, and Vinny [Everyman Founding Artistic Director Vincent Lancisi], with remarkable generosity and faith, said yes!

Are you pleased with the result? Do you feel this production represents your vision for Be Here Now?

I’m thrilled. I love this cast. I have brilliant designers, and, really, everyone at the theater has been warm, and generous and smart and welcoming. I really couldn’t have dreamt of a better team to help me find the play here.

What was it like working with Beth Hylton, who in addition to being your Bari, also directed a Salon reading of Be Here Now last year?

Beth is an extraordinary actress. At first glance, no one would think she was right for this role. She just walks into the room, and brings a ray of sunshine with her, while Bari is a dark, brooding misanthrope. But Beth can completely transform, and she has the same appetite for continued exploration that I have – she’s constantly thinking and trying new things, and working the calculus to find Bari’s complicated journey. It’s not an easy role. And she’s brilliant in it.

Surveying your previous work – plays like End Days, Informed Consent, Leveling Up, and Fortune – it’s clear you don’t shy away from significant existential issues, even in comedies. Does addressing life’s “big stuff” speak merely to your interests or is it part of your greater philosophy as an artist?

Yes. That’s what I’m interested in. What does it mean to be human, and how do we persist, aware of our mortality. How do we make the time we have count.

Be Here Now was commissioned by Cincinnati Playhouse, which has since commissioned you to write two more plays to form a trilogy. Congratulations! Are you enjoying revisiting these characters and what’s going on in their lives?

There are three adjoining towns mentioned in Be Here Now (loosely based on the town in the Catskills where I grew up.). So the next two plays will take place in those other two towns. I’ve finished a workable draft of the second play, and Luanne turns up in it. It’s enormous fun bringing her back — like getting to spend time with an old friend.

What’s next for you?

I have a new play, Much Ado About Boys, where seven of Shakespeare’s young heroines, all suffering from boy troubles, meet, by chance, in the woods, and save each other from their dire fates. It will premiere at Florida Atlantic University this fall! I’ve started researching the third play of the trilogy, and my composer collaborator, Dan Green and I are making plans for our next musical project. So… time to get back to my computer!

Many thanks to Deborah Zoe Laufer for answering my questions. You can catch Be Here Now at Everyman Theatre in Baltimore through February 16, 2020. 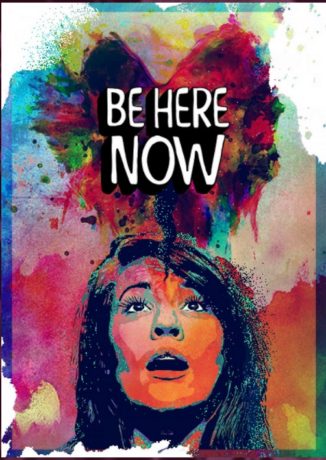 Be Here Now plays through February 16, 2020, at Everyman Theatre, 315 West Fayette Street, Baltimore. Tickets can be purchased at the box office or online.

Parking: Available across the street at the Atrium Garage; $11.00 fee.