As you enter the Jeffrey and Paula Gural Theatre at A.R.T/NY, you make your way through a professionally installed conceptual art exhibit, in which the artist is one of the works on display. It’s a spot-on hilarious send-up of upscale galleries, post-modern art, and the accompanying catalogue entries contained in the printed program (and by “upscale” I mean ridiculously pricey and laughably self-important!) in Parallel Exit’s priceless world-premiere production of Joel Jeske’s incisive, immersive, and interactive solo show The Artist Will Be with You in a Moment.

Created, written, and performed by the multi-talented Jeske, who, during the duration of the show, plays both the artist and the clown (as well as the tuba and the banjo), the work is presented as a sequence of 22 performance art pieces, introduced by Jeske, identified by titles projected on the clean white walls behind him, and separated by blackouts between segments (scenic design and colorful lighting by Maruti Evans). Mark Lonergan, Artistic Director of Parallel Exit, directs the work with immaculate control, understatement, and timing, all serving to highlight the intelligence of Jeske’s comedy and his stoic deadpan demeanor, which pays homage to such beloved icons of the past as Buster Keaton.

The sidesplitting performance includes segments of such favorite skills of physical comedy as mime, pratfalls, slapstick, and slow-motion walking (choreography by Danny Gardner) set to familiar mood-appropriate melodies and original music (by Peter Bufano) and all executed to perfection by the amazing Jeske. He is clothed in a Vaudevillian-style red jacket and pants, black-and-white striped socks, black shoes, and a traditional bowler hat (costume design by Oana Botez), which he juggles, throws, and kicks back on his head with flawless precision. He makes announcements, declarations, and artist’s statements from inside a picture frame (props by Rebecca K. David), stops for applause, and sings sweetly, to the thorough delight of the crowd. I didn’t stop smiling once through the entire show, and neither did anyone else on the night I attended.

Jeske also includes many irresistible bits of audience participation, in which he locks himself in a closet, plays a teacher who assigns tests and grades arbitrarily, leads rounds of musical chairs that he moves around the stage, distributes whoopee cushions to the house, and solicits companions to join him after the show. And he references such inspirational groundbreaking artists of the 20th century as the Belgian Surrealist René Magritte, known for his painting of “Man in a Bowler Hat,” and Joseph Beuys of the German Fluxus movement, who proclaimed that “Jeder Mensch ist ein Künstler (“Everyone is an artist”) – the uplifting and encouraging message of this unique theatrical experience (a genre for which he and the company have received multiple well-deserved award nominations).

Everything about Joel Jeske and The Artist Will Be with You in a Moment is witty, engaging, and impressive. Walk fast, not slow, to A.R.T./NY to catch the limited engagement of this enchanting show. 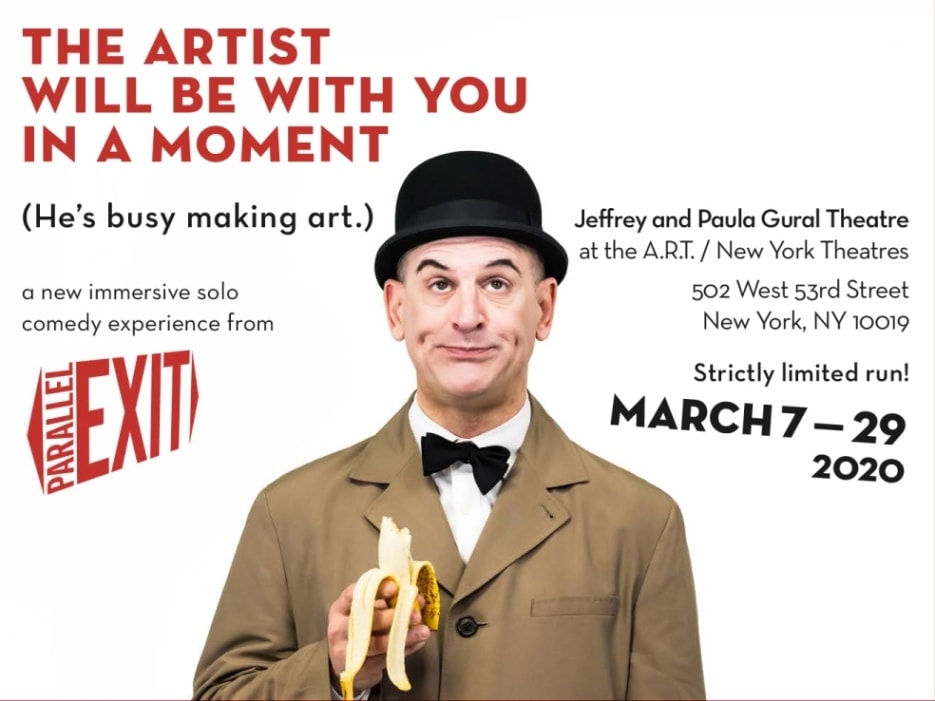