Normally we who cover theater for DC Theater Arts collect our favorites as the year draws to a close, but this has not been a normal year. In mid-March the 2020 season was interrupted by a pandemic and theaters went dark for who knows how long. Shows that were running closed. Shows in production got canceled. Suddenly the theater community felt profound uncertainty and anxiety.

We at DCMTA cannot magically turn the lights back on. But we realized there is something we can do to raise spirits: Share our staff favorites now for the shows we saw in 2020 before the shutdown. Just like we do at year-end—all our favorite productions, performances, design elements—except right now when our digital applause might serve as a gift of uplift.

Here then is our special spring 2020 edition of staff faves—in tribute to all the artists and community theaters whose work so far this year has left an indelible impression on us.

The first category is Outstanding Productions (Community), and in it we recognize:

The second category Outstanding Performances (Community) that made the biggest impact on DCMTA writers so far this year. Performers are listed in alphabetical order by last name.

The third category is Outstanding Design Elements (Community) that made the biggest impact on DCMTA writers so far this year. In this category we recognize artistry behind the scenes:

Recipients are listed in alphabetical order by last name. 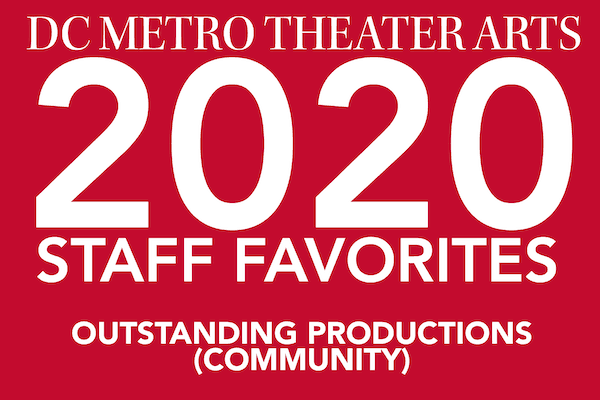 Bloody Bloody Andrew Jackson at Dominion Stage
Dominion Stage has given this rowdy, irreverent, and rollicking rock musical a remarkably woke production that is as rousing as it is reflective and as satiric as it is unsettling. Set in 1800s America, the show with music and lyrics by Michael Friedman and book by Alex Timbers is based loosely on the life of Andrew Jackson, who is portrayed as a swaggering emo rock star. This zesty production is amped-up fun, yet it unfolds a true tale that’s dead serious, the ethnic cleansing of Native Americans carried out by the seventh U.S. president. —John Stoltenberg
John Stoltenberg’s review

The Children at Colonial Players of Annapolis
Everything comes together in this production, from powerfully intimate acting to spooky lighting and smoke effects, to create thought-provoking theater. As Darby DeJarnette writes in her review: “While bleak, this play offers audience members ample opportunity to question how our culture engages with the world and how we, as individuals, navigate the impact our lives and decisions will have on future generations.” —Charles Green
Darby DeJarnette’s review

Moonlight and Magnolias at The Little Theatre of Alexandria
Under Juli Tarabek Blacker’s sure direction, the cast keeps up the snappy pace that makes the play work, and skillfully creates the potent atmosphere of blended idealism, cynicism, and insecurity that gives it its power. Stacey Becker and Ken Brown have designed an ideal set for all this madness to take place, a large and airy office (complete with gorgeous vintage movie posters on the walls) that gives the cast plenty of room for slap fights, chases, imaginary childbirth, and all the other exertions involved in a small cast’s acting out an epic melodrama. The comic antics may seem like an odd fit with the human drama simultaneously playing out, but Blacker and her talented cast make it all work beautifully and show the power of story to draw people together even when it can’t fully reconcile their differences or solve their problems. —Gina Dalfonzo
Gina Dalfonzo’s review

Perfect Arrangement at Silver Spring Stage
With Perfect Arrangement, Director Leigh K. Rawls and Producer Lennie Magida created a magnificently paced production of Topher Payne’s timely study of social foment and change. The sets dazzle, and the sound and lighting evoke mid-20th-century America, immersing those who remember it in nostalgia and those new to it in a colorful, musical embrace. The pièce de ré​sis​tance of this production is the cast. They pop. They crackle. And they snap. Lines, entrances, emotions, movement all move seamlessly, ebb and crescendo, and keep our minds and our hearts with them as they speed along. A perfect production of a Perfect Arrangement. —Jim Pearson
Jim Pearson’s review

Yellow Face at Silver Spring Stage
Silver Spring Stage put a unique imprint on this important work by playwright David Henry Hwang. Employing satire to explore racism, Yellow Face explores ethnic divisions through parody only to find some questions too serious to laugh at. The elements combined to make this production one not to miss. —Andy Arnold
Andy Arnold’s review 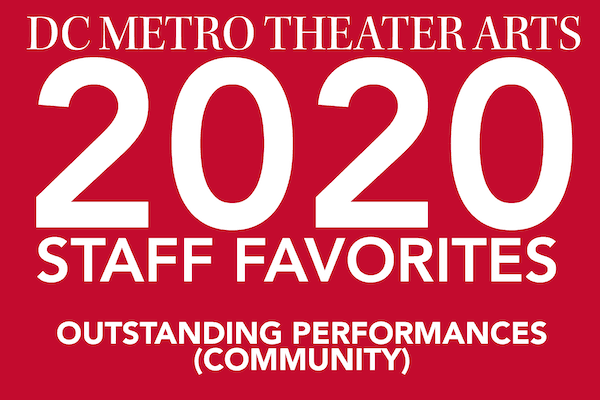 Ari Post and Andra Whitt as Thomas Novachek and Vanda Jordan
Venus in Fur at Providence Players of Fairfax
Ari Post and Andra Whitt make a powerhouse pair. Each brings a charisma that feeds off of the other, and their energy reverberates through the space like an electric shock. While the material is raw and emotional, it’s also full of memorable comedic moments, jerking the tone from edgy and tense to flirtatious and lighthearted, and then back again. By the end, you almost feel emotionally drained, as if wrung out like a damp cloth. —Julia Amis
Julia Amis’s Review

Tom Silk as William Gillette and Zell Murphy as Felix Geisel
The Game’s Afoot at Reston Community Players
A highlight comes in the second act when the murder victim is carried by two main male characters, Gillette (Tom Silk) and Felix Geisel (Zell Murphy), as they attempt not so successfully to hide the body from Inspector Goring. The cast member who portrays the unfortunate murdered soul personifies “playing dead” as they are maneuvered into some really amusing body positions. Hilarity ensues as the two bumbling men try every which way to find a suitable place for the victim to remain hidden in their attempt to shield a suspect. Their physical slapstick was an audience favorite. —Dana Roberts
Dana Roberts’s Review 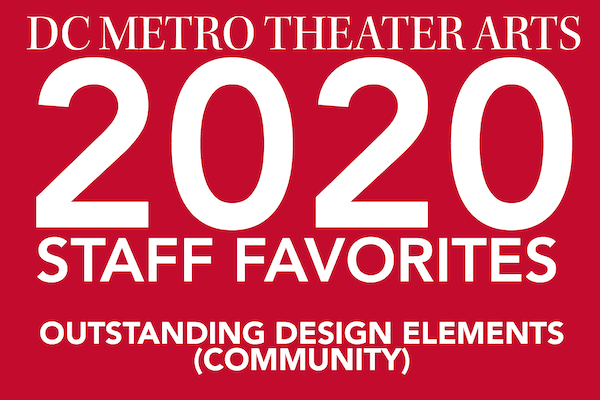 Arielle Bayer, Music Direction
The Spitfire Grill at Rockville Little Theatre
James Valcq’s score, with folk, bluegrass, and country influences, fits the locale and spirit of the show like a glove. Andrew Nixon on the cello is the most notable member of Music Director Arielle Bayer’s four-member band. The cast’s singing likewise fits the down-home atmosphere of the place, and Bayer and Director Terri Magers wisely did not steer the vocals in the direction of a big Broadway-style sound. —Bob Ashby
Bob Ashby’s Review

Design team (Wes Bedsworth, sound; Laurie Nolan, set design; Constance Robinson, set decoration; Jenn Smith, lighting)
The Children at Colonial Players of Annapolis
A huge highlight of this production is the simulation of a nuclear meltdown aided by Jenn Smith’s skilled lighting design and Wes Bedsworth’s sound design. Many of the scenes in the cottage take place during a planned blackout. Smith’s skill is apparent when the lights come back on—the lighting beforehand was sufficient for the audience to see what was occurring, yet the change is still very noticeable when electricity is restored. Likewise, Set Designer Laurie Nolan and Set Decorator Constance Robinson have done a wonderful job of creating a charming but sparse environment for this production. —Darby Dejarnette
Darby Dejarnette’s review

Danielle Guy, Direction
Bloody Bloody Andrew Jackson at Dominion Stage
Besides mounting a production that was ebulliently anarchic and exuberantly entertaining, Director Danielle Guy confronted and contended with this musical’s derisive depiction of Indigenous people with extraordinary conscience and creativity—beginning with a blunt open letter titled titled “Is BBAJ a problematic show?” In choice after choice—including in casting, costuming, and playing against text—her work was exemplary. Under Guy’s compassionate direction, a community of artists committed to keeping faith with the truth delivered a showcase of accountable social-justice aspiration. —John Stoltenberg
John Stoltenberg’s review

Eric Lund, Lighting Design
Book of Days at Colonial Players of Annapolis
Lighting Designer Eric Lund uses lighting wonderfully to help connect the play’s different strands. During the tornado, strobe lights flash for lightning. For Ruth’s Shakespeare audition, the lights focus on her alone. The spotlight shines on each actor as they give their monologue, and as they comment offstage. At the beginning and end, with the cast sitting and standing around the stage, the lights dim on each one as they leave. —Charles Green
Charles Green’s review