Spooky Action Theater’s New Works in Action play-reading series continues livestreaming Sunday, May 31, at 3 pm with We Victorians by out queer playwright Matthew Kelly. In the #MeToo era, the play’s pitch packs a provocative punch:

A 21-year-old assistant brings a sexual harassment suit against a respected white-glove attorney. Queer empowerment and old-school privilege collide in this radical interrogation of power … 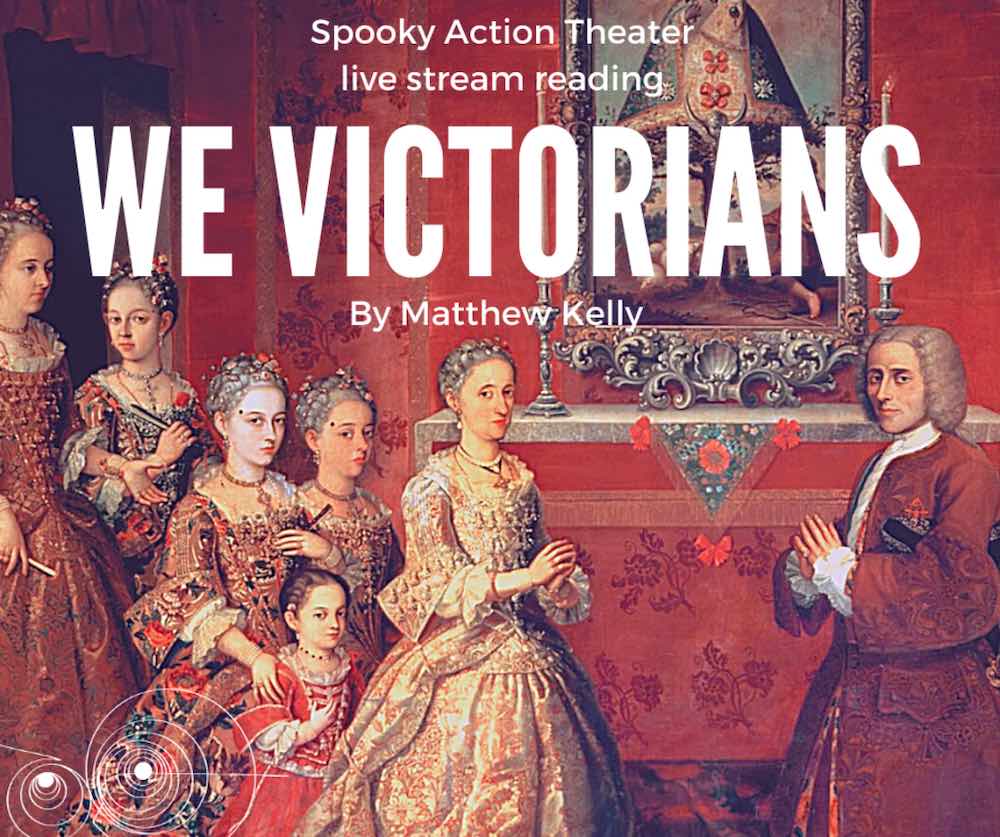 The one-time-only reading on Spooky Action Theater’s YouTube channel is free and will be followed by a talkback on Zoom with the playwright, the cast, and Director Tyler Herman.

Roberta: What moved you to write We Victorians?

Matthew: The inspiration for the piece was a desire to delve headfirst into the messy world of power—particularly the way power imbalances shape our relationships. The play world intersects a number of relationships—romantic, professional, familial—all of which have their own hierarchy, food chain, messiness, and violence. Rather than parse them out into neat and ordered strands, the play presents them in all of their complexity. And it does so in a non-naturalistic way, queering contemporary power discourse, queering mythology, queering the classics, and queering history in the process.

At the end of the day, We Victorians is a play peopled by characters who are capable of wonderful things and terrible things, who lie to themselves even as they lie to others, who capitalize on their privilege even as they seek to understand how that privilege affects others.

Did the #MeToo movement, in your opinion, change how men see women? Do you believe something changed? If so, what?

The #MeToo movement has awakened society to the inner workings of power—to the levers that have long controlled our world. It’s begun to shine a light on the inequity, the unfairness, and the ugliness of those forces. In so doing, it’s played a pivotal role in changing the way we all see ourselves and our relationships with others.

I also think that it’s important that we realize that the #MeToo movement isn’t an isolated event—like a singular battle that one wins or loses. It’s an ongoing effort to make people think and act differently, and to redress historic abuse. We are now engaging with the important question of what it means to achieve deep, lasting empowerment in the #MeToo era. The arts play an important role in this dialogue. And there are a number of critically important questions we as artists should ask. How do we empower victims without defining them exclusively in terms of their victimhood? How do we capture the realities of power dynamics without simplifying them into reductive constructs? How do we help challenge and change a system that, in its ubiquity, constancy, and power, rivals the laws of physics? The list goes on.

What kind of reaction are you expecting?

I never expect particular reactions. But I hope that the play motivates audiences to engage in a deep discourse about power. My goal is for people to sink their teeth into the play—to constantly question how they feel about the characters and how the characters make them feel about themselves.

I believe that theater is the most transformational when it provokes discussion and disagreement rather than pacify with catharsis and denouements. After all, when you turn the Zoom off, the world will be as messy and complicated as it was before you turned it on. In 2020 perhaps more than ever, we need theater that unsettles more than it settles. After all, it’s only when you kick up enough dirt that you can see what truly lurks beneath.

Is the Spooky Action Theater reading the first time the play will be read online?

This is the first time We Victorians will be read online! I finished the first draft in early 2019 and then continued its development as part of a residency with the NJ Play Lab, founded by the wonderful Cheryl Katz and Kaitlin Stilwell. That residency is ongoing and the script continues to evolve and change.

What do you think of this new platform?

I’m excited to see how the play translates on Zoom. The stage version actually features video projection, so there’s definitely a current that lends itself to this format. I’m excited to see what the cast and crew create!

MATTHEW COLE KELLY is a queer playwright, librettist, lyricist, and screenwriter whose work has been produced and developed throughout the US and world garnering nominations for over twenty awards and honors. Previous developmental credits include Abingdon Theatre, Luna Stage, Letter of Marque Theater, Metropolitan Playhouse, HRC Showcase Theatre, the NJ Play Lab, California’s Talk Back Theatre, Loose Change Productions, the Makor Steinhardt Center, Turn Park Art Space, and Occupy Wall Street, among many others.

Recently, Matthew’s play THE GODS OF THE OZARKS received a full production by Dublin’s AboutFACE Theatre, garnering praise from Ireland’s largest national newspaper for “explor[ing] profound questions of life and death with a playful touch.” His opera AMI & TAMI (composer Mátti Kovler) was translated into Italian for a November 2019 performance in the historic 1860-seat Teatro Coccia di Novara. Having received five-star reviews, the team is planning a European tour. Matthew is currently in residence at the NJ Play Lab, where he recently debuted a 29-hour reading of his new play WE VICTORIANS, and at New York City’s Letter of Marque Theater, where debuted a workshop of THE WAGER, an immersive play set in a 17th-Century French casino. He is also in residence at NYC’s Floating Tower, where he is developing several new operas and musicals.

Matthew studied playwriting at Brown University under the tutelage of Paula Vogel before earning a PhD in Sociomedical Sciences and History from Columbia University. He is a member of the Dramatist Guild and the BMI Lehman Engel Librettist Workshop.