The cultural momentum powering protests that followed the May 25 murder of George Floyd has galvanized a national and local movement for transformational change in American theater led by Black, Indigenous, and People of Color (BIPOC) theater artists. This movement marks a watershed moment American theater history. 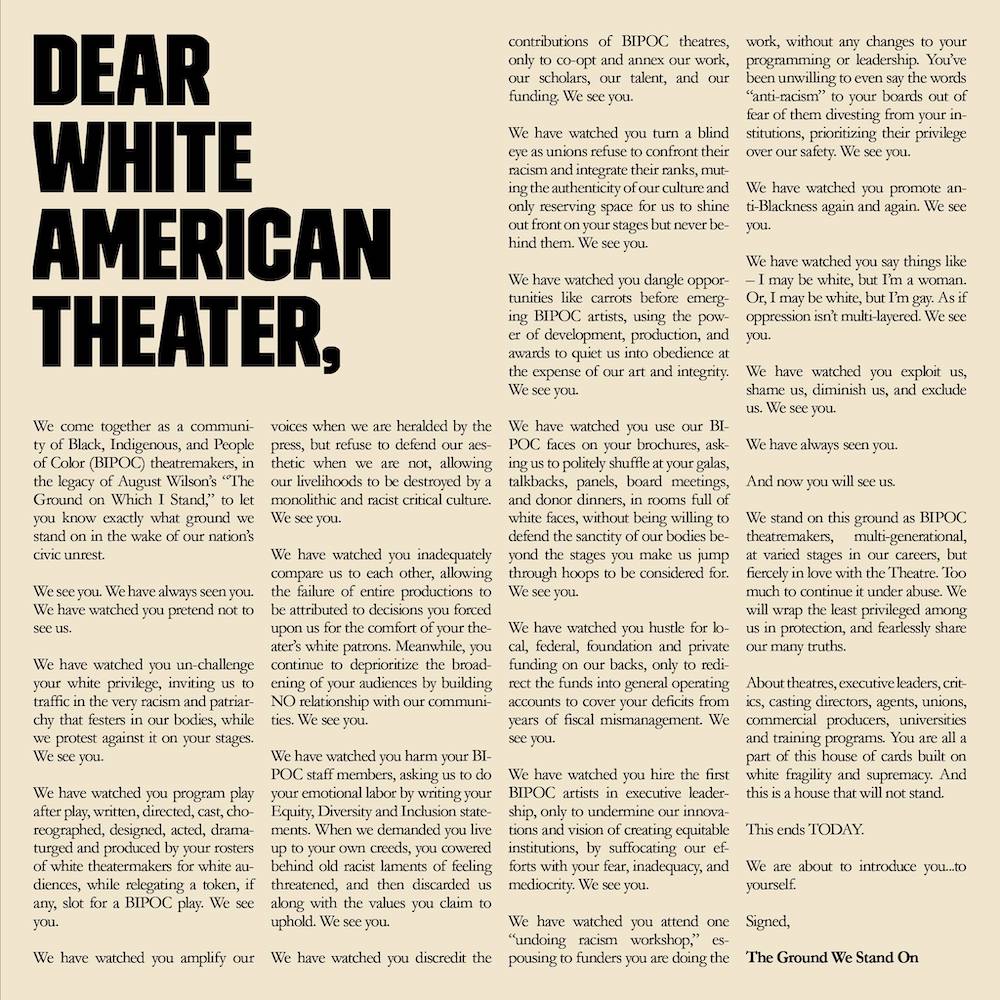 A national petition has gathered hundreds of signatures online (including a number of local notables). Stating the case for a new era of racial reckoning, it says, in part:

Dear White American Theater,
We come together as a community of Black, Indigenous, and People of Color
(BIPOC) theatremakers, in the legacy of August Wilson’s “The Ground on Which I Stand,” to let you know exactly what ground we stand on in the wake of our nation’s civic unrest.
We see you. We have always seen you. We have watched you pretend not to see us.
We have watched you un-challenge your white privilege…
We have watched you exploit us, shame us, diminish us, and exclude us….
We see you….
And now you will see us…

By “white American theater,” the signatories implicate the entire cast of characters whom white supremacy privileges by default:

…executive leaders, critics, casting directors, agents, unions, commercial producers, universities and training programs. You are all a part of this house of cards built on white fragility and supremacy. And this is a house that will not stand.

Locally hundreds of theater artists have affirmed and shared a May 31 Facebook post by Theater Alliance Artistic Director Raymond Caldwell. Calling out white theaters whose statements of support for Black Lives Matter lacked accountable substance, the post says in part:

You stand by Black folx in death, but while we live you use Black traumas to build, entertain, and net profit from your White audiences. You systematically exclude Black people from participation in your cultural organization through your season selection, ticket prices, marketing strategy, and hiring practices. You abuse and take advantage of the few Black artists/administrators that you employee. And you recklessly drop in and out of Black communities with your “outreach/education programming” that is often less about the people or program, and more about the grants/funding/optic opportunities your organization receives.

All across the country, related revolutionary actions are happening, including an online “Theatre Makers of Color Requirements” survey—”to generate a list of demands/rules of engagement to hold White spaces accountable for the way they engage Theatre Makers of Color”—and a new grassroots organization called Broadway for Racial Justice, which launches its #WeAreNotATrend campaign on Juneteenth.

This movement goes way beyond a call for better EDI (Equity, Diversity, and Inclusion). This moment is a manifesto for a fundamental rethink of what theater gets produced by and for whom—and a declaration of theater’s foundational obligation to resist and redress historic and systemic racial inequality.

DC Theater Arts stands in solidarity with this movement, and we offer our communication channel to help amplfy the BIPOC voices that now are pointing the path to American theater’s future.

Here’s how to reach us.