Although COVID-19 has caused the cancellation of this year’s outdoor summer performances of free Shakespeare in the Park, it hasn’t stopped The Public Theater from offering another installment of its popular annual productions from The Bard’s canon, by shifting it from “in the air to on the air.” The new podcast series of free Shakespeare on the Radio, in partnership with WNYC studios, presented an audio broadcast of Richard II over four nights on the WNYC 93.9 FM and AM 820 stations in the New York tri-state area, and nationwide on the website at WNYC.org, so audiences everywhere could partake of this particularly timely classic.

Written entirely in verse, Shakespeare’s historical tragedy of ca. 1595, and the first of his four plays on the rise of England’s House of Lancaster, revisits the last years of the eponymous Plantagenet King (1367-1400). The intricate multi-character narrative traces the factional politics, arbitrary rule, rapacious financial affairs, social unrest, shifting loyalty, familial plots, and personal discord that characterized the era of the embattled monarch, and the defeat, deposition, imprisonment, and ultimate regicide that brought both his reign and his life to an end.

Conceived for the podcast format and directed by Saheem Ali, The Public’s epic radio drama is told by a predominantly BIPOC cast of more than two dozen actors, led by André Holland in the titular role, and dedicated to the Black Lives Matter movement. The relevant thematic selection of an intense power struggle and revolutionary uprising in a divided country with a fractured system resonates strongly in the current state of our nation, while underscoring Shakespeare’s universality and remarkable insight into the complexities of the human condition, the inequities of the socio-political structure, and the question of why leaders fail.

The audio version of the play, recorded remotely by each member of the cast this summer (with mixing and sound design by Isaac Jones), enables the listener to focus on the extraordinary eloquence, poetic rhythm, and profound significance of the writing, as delivered with rich emotion, psychological penetration, and expressive facility by the expert Shakespearean ensemble, free from any visual enhancement or distraction. Though some prior familiarity with the dense plot and myriad characters is valuable for a ready comprehension of the complicated story, The Public, to that end, provides a synopsis of each scene, a script of the entire, and a complete cast list for viewing and download on its website, and The Narrator, voiced with clarity by Oscar winner and Tony nominee Lupita Nyong’o, helps the listening audience to follow the action and intrigue, supported by an evocative original score by composer Michael Thurber.

Holland, in a stellar audio performance, masterfully captures Richard’s range of personality traits – a stately, privileged, and poetic embodiment of Dei gratia rule, too often disconnected, self-serving, irrational, and capricious in his decisions, and then heartrendingly pained, sensitive, and vulnerable in his emotional commitment to “tell sad stories of the deaths of kings.” The purposeful “color-conscious” cross-gender casting of Miriam A. Hyman as an impassioned Bolingbroke, banished abroad by his cousin-turned-enemy Richard, returned to England to stage a revolution against him, and eventually usurping the throne and wearing the crown as King Henry IV, holds new meaning for the empowerment of Black women in present-day America. 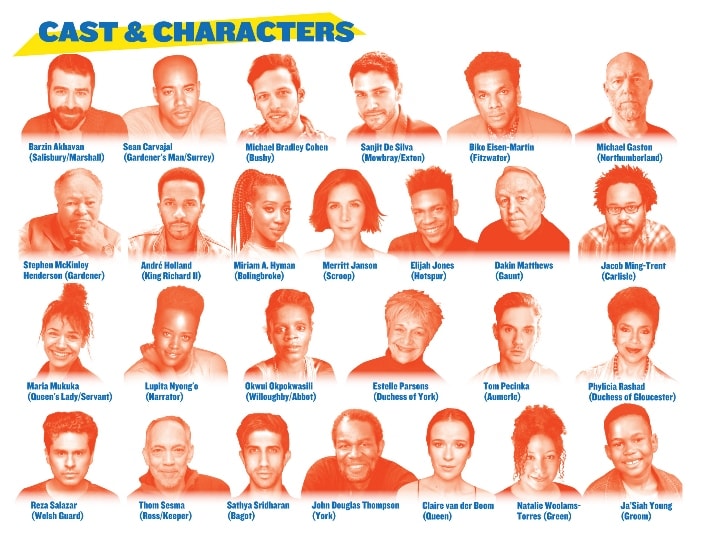 Tony winner Phylicia Rashad as the Duchess of Gloucester, mourning widow of the wrongfully murdered Duke (an act that triggers the momentous consequences), imparts a perfect mix of gravity, heart, and anger to her role; Sanjit De Silva is convincingly defiant and indignant as the accused Mowbray; Dakin Matthews brings just the right vengeful rage to the dying Gaunt, father of Bolingbroke and uncle to Richard; Claire van der Boom is appropriately regal, articulate, devoted, and gently weeping as the Queen; and Estelle Parsons as the Duchess of York – a “frantic” “shrill-voiced suppliant” begging King Henry for the pardon of her son – potently reaffirms her deserved status as a five-time Tony nominee.

The Public Theater’s powerful podcast serialization of Richard II brings to life the universal issues and relatable struggles that make the time-honored classic a classic. All episodes are preceded and followed by weighty discussions about the play in our times, with members of the cast and creative team, and contextual commentary and analysis by Shakespeare scholars James Shapiro and Ayanna Thompson, hosted by staff writer Vinson Cunningham of The New Yorker.

Running Time: Approximately 60 minutes for each episode, including commercial breaks and pre- and post-show conversations.

Richard II played at 8 pm, Monday, July 13-Thursday, July 16, at The Public Theater, streaming on WNYC.org. The full series is now available for listening wherever you get your podcasts, including Google Play.