With all videos in The Decameron available through July, Amy Kotkin completes her original review with yellow-highlighted additions below.

History always has lessons to teach during times of enormous tumult. How did past societies struggle through similar cataclysms and emerge with their spirits intact? Many of us are newly aware of the 1918 Spanish Flu epidemic. But the Black Death? What can we learn about coping with COVID-19 from an author who penned stories back in 1349, when the Plague had just ravaged Europe. A lot, as it turns out.

Giovanni Boccaccio’s The Decameron, 100 stories told by 10 young people over 10 days while quarantining in a villa outside disease-ridden Florence, is a literary crash course on how art can be harnessed to express love, fear, and grief during an extraordinary epoch. Now, the uber-creative Synetic Theater turns Boccaccio’s classic tales into a series of digital shorts created and performed by the company’s current and past players. They are not alone in paying attention to this timeless masterpiece. On July 12, the New York Times launched its own Decameron Project, new short stories by a prominent authors who, like all of us, are trying to make sense of a world gone awry.

Synetic launched its series of original short videos on July 10—after having paused its plans in wake of the widespread racial justice protests that erupted in June. Each day through July 19, cast members will post digital stories inspired by Boccaccio’s tales. It’s a wonderfully collaborative enterprise. Actors mentor each other, provocative music accompanies each piece, and some of the camerawork is truly inventive.

Not surprisingly, the digital sketches posted thus far are most engaging when they take full advantage of the Synetic players’ shear physicality. Through dance, mime, and striking choreography, they tell poignant stories of isolation. The company members’ inventiveness is made even more impressive by the fact they they appear to be working mostly from their own kitchens, living rooms, and bedrooms, as well as abandoned studios, during this ongoing period of confinement.

Maria Simkins (Day 1) nearly bursts out of a tiny apartment during the Prologue, where she gallops through a gamut of emotions from depression and defeat to stalwart strength, determination and joy. Watch her transformations—and then watch them again to appreciate her range. If there is any silver lining in the necessity to enjoy the Synetic Theater offerings from our own confined quarters, it’s that you can rerun your favorite parts and truly appreciate how actors transform themselves from one scene to the next.

Mandi Lee’s Mirror Woman (Day 2) is a wonderful meditation on one’s own soul. In a studio mirror, she is alternately imprisoned and set free by her own reflection. The drag she exerts on herself as she glides alongside the mirror is palpable, as is the freedom she eventually achieves.

Marissa Molnar’s wry piece (Day 2) on writer’s block plays out like Groundhog Day. No matter how often she restarts her quotidian rituals, she can’t get past the “Dear” in an intended letter—until she finds a way of repurposing the paper itself into a tiny boat that sets sail from Coney Island. Kat Cárdenez-Cruz (Day 5) begins by perusing countless internet articles on boosting creativity during times of quarantine. While she and Molnar both give vivid expression to the stress of isolation and confinement, they emerge with strikingly different results.

Da’Von Moody (Day 8) explores the monotony of our pandemic lives while watching his money and resources draining away with each passing day. Calling on a friend (Solomon Parker III), he is overcome with desperation and the two engage in a balletic test of mental and physical strength.

After several intriguing but dark episodes, Raymond Simeon and Dylan Arredondo (Day 5) offer a welcome bit of comic relief with their spoof on male “pregnancy.” With titles borrowed from silent films, watch these hilariously mismatched partners give birth to—you’ll be surprised!

Jackie Madejski (Day 7) also uses old-timey titles and very clever camerawork in her hilarious segment, The Magic Jug. When her husband comes home mid-day after failing to find work, Jackie somehow manages her lover to hide himself in a too-small jug, which her husband, desperate for cash, determines to sell.  A wacky chase ensues, all set to high-speed Dixieland music.

If you’ve never thought of your household cleaning tools as potential love interests, think again.  After 241 days of quarantine, Catherine Nunez conjures a lover out of her bright pink mop and engages in a sensual backyard romp until caught by an imposing vacuum cleaner (standing in for the cuckolded husband) in a truly inspired Day 9 sketch.

A few of Synetic’s stories feature unseen narrators. Rachael Small’s Day 8 tale is told entirely by dolls, and Thomas Beheler summarizes several stories by drawing quick sketches on a whiteboard. Occasional exercises like these give the series lively diversity and the opportunity to showcase the Synetic family’s wide range of creative talents.

Like Boccaccio’s original, Synetic’s The Decameron makes us feel a little less alone and perhaps more hopeful about the human spirit as we glimpse behind closed doors to imbibe bits of creative mayhem. When we can finally emerge, let’s hope that brave and generous efforts like this make us more humble, kind, and grateful for our artistic community.

In a larger sense, this spirited collection forces us to consider whether online programming has a future when the pandemic subsides. While no substitute for the immersive, multi-sensory experience that the Synetic Theater has traditionally provided in person, can highly personal, intimate projects become a meaningful, ongoing extension of the theater’s mission, reaching new audiences in new ways with experiences specially tailored for at-home delivery? That is a question being pondered throughout the theater world. Synetic—with its legacy of ground-breaking creativity—seems particularly well-positioned to offer inventive solutions.

Running Time: The sketches so far are each about 5 to 15 minutes.

The Decameron streams on the Synetic Theater website. All episodes will be available online through the end of July. For tickets and further information, go online. 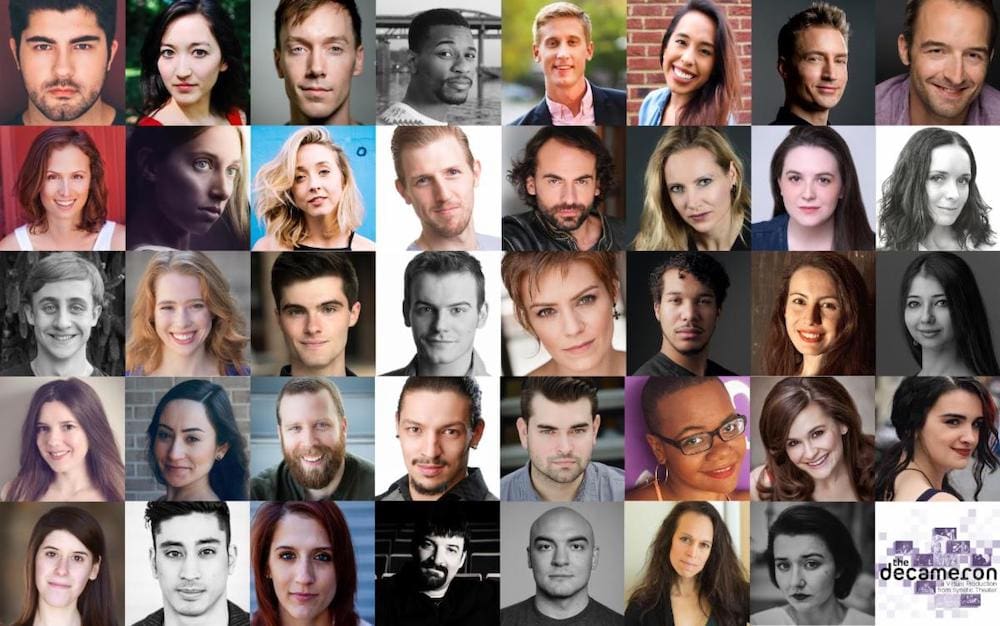