Ghostlight Records, an independent leader in original cast recordings of Broadway musicals and solo albums by its stars, has announced two new releases in the world-premiere series of The Michael Friedman Collection and an upcoming collector’s edition of Lin Manuel Miranda’s In the Heights as the latest in its award-winning 20-year catalogue of over 200 albums.

The Michael Friedman Collection – Best known for the rock musical Bloody Bloody Andrew Jackson, which played to multiple nominations, awards, and critical acclaim in its Off-Broadway premiere at The Public Theater and its transfer to Broadway in 2010, Obie Award-winning composer and lyricist Michael Friedman (1975-2017) was, at the time of his premature death at the age of 41, the Artist in Residence and Director of the Public Forum at The Public and the Artistic Director of New York City Center’s Encores! Off-Center. To honor him and to preserve his legacy, Ghostlight Records is partnering in a long-term joint project with The Civilians – a company dedicated to making new works of “investigative theater,” led by Founding Artistic Director Steve Cosson (and of which Friedman was also a Founding Associate Artist) – to issue the debut recordings of nine musicals that the prolific songwriter created with them. Following last year’s release of The Great Immensity, The Abominables, and This Beautiful City, the second installment of the collection – (I Am) Nobody’s Lunch and Paris Commune – are now available for streaming and download online.

(I Am) Nobody’s Lunch – The cabaret-play by Michael Friedman (music and lyrics) and Steve Cosson (book) made its debut with The Civilians at 59E59 Theaters in 2006, followed later that year by its London premiere at Soho Theatre. Based on interviews with real-life people, it considers the politics of (mis)information and propaganda, while posing the timely question, how do we know what’s true about what’s going on in the world when everyone in power seems to be lying to serve their own interests? Featuring a track list of eight original songs, the album is performed by Quincy Tyler Bernstine, Nick Blaemire, Adam Chanler-Berat, Brad Heberlee, Daoud Heidami, Osh Ghanimah, Ashley Pérez Flanagan, Rebecca Naomi Jones, Jennifer R. Morris, Sarah Beth Pfeifer, Brian Charles Rooney, Mary Testa, Stephen Schapero, and Jacob Keith Watson, in the roles of the eccentric, questionable, and disenchanted characters.

Paris Commune – Using found texts and songs of the period, the socio-political musical docudrama, written by Steve Cosson and Michael Friedman, with songs translated and adapted by Michael Friedman, captures the events of the short-lived revolutionary uprising of 1871 Paris, in which the working-class community radically reimagined a socialist society, overthrew the French government, and declared the autonomy of Paris. The historically-inspired show, which played at The Public Theater and La Jolla Playhouse, had its world premiere at Boston’s ArtsEmerson and the 2012 BAM Next Wave Festival. The world-premiere album, comprised of twelve tracks in English and French, features the powerful voices of Kate Buddeke, Aysan Celik, Charlotte Dobbs, Rebecca Hart, Nina Hellman, Daniel Jenkins, Brian Sgambati, and Sam Breslin Wright, with an ensemble including Randy Blair, Ally Bonino, Sarah Beth Pfeifer, and Jonathan Raviv.

Both new releases feature music direction by Dan Lipton and orchestrations by Wiley DeWeese. Ghostlight Records and The Civilians will host an online interactive listening party for the two albums on Thursday, August 27, at 8 pm ET. Tune in on YouTube. 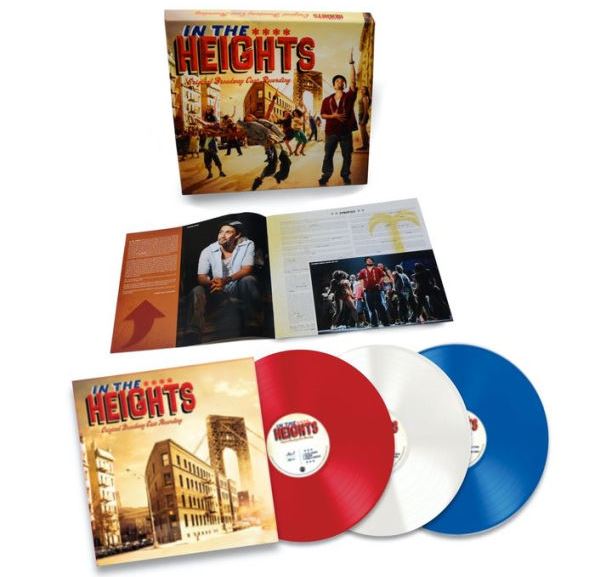 In the Heights – Winner of four Tony Awards, including Best Musical and Best Original Score, the blockbuster hit by Hamilton’s Lin-Manuel Miranda, with a book by Qiara Alegría Hudes, features Latin, salsa, and hip-hop-infused music in a story about the struggles and dreams of three generations of the tight-knit community in the eponymous neighborhood in upper Manhattan. Ghostlight’s Grammy Award-winning original cast recording (with orchestrations by Alex Lacamoire and Bill Sherman, and music direction by Alex Lacamoire) has become a top seller since it was released in 2008. This September 4, a new Barnes & Noble exclusive version will be released by Ghostlight as a special three-LP vinyl box set, with records in red, white, and blue (the colors of the flag of Puerto Rico), to celebrate Vinyl Weekend (September 4-6). The collector’s edition features remastered audio, 90 minutes of music on 33 tracks, and a sixteen-page booklet with full lyrics, original Broadway show photos, a synopsis, and liner notes from director Thomas Kail, along with an MP3 download card. To pre-order, visit the website.

While we’re all missing the experience of live theater during the pandemic shutdown, we can be happy that Ghostlight Records is keeping the spirit alive with these top-quality albums of unforgettable shows by popular artists.