Two prolific scholars and writers on Shakespeare, and colleagues at Stratford-upon-Avon’s Shakespeare Birthplace Trust, Paul Edmondson (Head of Research and Knowledge and Director of the Stratford-upon-Avon Poetry Festival) and Stanley Wells (Honorary President at the Shakespeare Birthplace Trust and General Editor of the Oxford and Penguin editions of Shakespeare) have combined their considerable knowledge and expertise to present a fresh, expanded, and illuminating look at All the Sonnets of Shakespeare. The new tome, published by Cambridge University Press, extends beyond the standard collection of The Bard’s sonnets per se, while offering original interpretations and commentary on their chronology, content, and context. 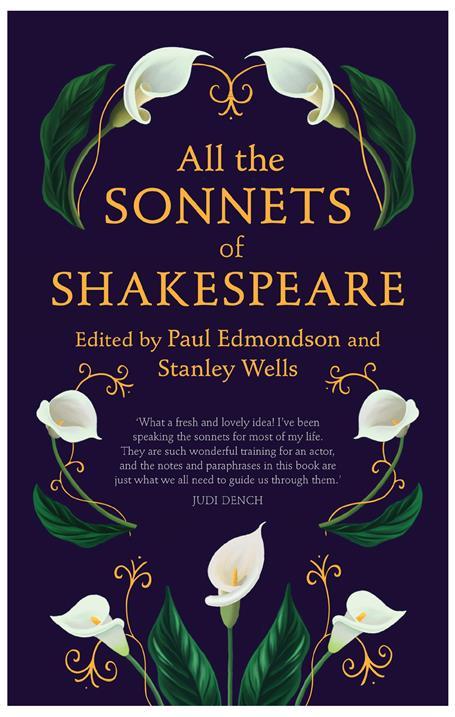 The co-editors’ groundbreaking revisionist view expands the number of sonnets from the long-established 154, as published in the classic 1609 compendium (Shakespeare’s Sonnets: Never before Imprinted), to a total of 182, by including alternative versions of two of them, incorporating three that were first attributed to Shakespeare in an unauthorized anthology of 1599 (The Passionate Pilgrim), and integrating an additional 23 examples of his use of the sonnet structure within the dramatic scripts of his plays. They can be found in more than 30 years of his writing, from pre-1582 to 1613, as both stand-alone poems and amidst the texts of such diverse works as Love’s Labour’s Lost (“the most heavily sonnet-laden of all Shakespeare’s plays”), created at the height of England’s sonnet-writing vogue, to the iconic prologue and romantic passages of Romeo and Juliet.

In addition to enlarging the canon, Edmondson and Wells have grouped the sonnets in a revised sequence according to the probable dates of their composition, rather than publication, based on observations of their related subjects, grammar, and syntax. The reorganization is explained in a cogent introduction, which gives new insights into the sonnets’ sources, meanings, personal emotions, and the gender of their voices, while questioning the presumed autobiographical situations that were believed to have inspired them, and shedding new light on Shakespeare’s career, personality, and intimate thoughts and feelings about love and sexuality.

The introduction also contains a brief history of the sonnet, tracing its form, etymology, and predominant themes, as well as some interesting facts about Shakespeare’s – citing a pun on the surname of his future wife Anne Hathaway in the sonnet traditionally numbered 145 (“’I hate’ from hate away she threw/And saved my life, saying – ‘not you’”) and quoting the only full line from a sonnet that is duplicated in one of his plays (“Lilies that fester smell far worse than weeds” appears in both Sonnet 94 and Edward III). And to aid with the understanding of present-day readers, the book includes explanatory notes with definitions of the archaic words and expressions used by Shakespeare and his era, and an appendix of literal paraphrases of the sonnets in modern English

Available for purchase on Amazon and other sites, All the Sonnets of Shakespeare presents a wealth of valuable material and compelling interpretations in a clear, comprehensible, and convincing style that will hold appeal not only for Shakespeare scholars and students, but for all devotees of “the supreme poet-dramatist” and his work.