Olney Theatre Center’s virtual production of The Humans offers proof positive of the old adage: Necessity is the mother of invention. Just see how they have turned the pandemic’s crushing blow into a new and deeply satisfying theatrical experience. As Artistic Director Jason Loewith explained in his moving prologue, the whole production was nearly scrapped when the theater closed in March. However, with support from the Paycheck Protection Plan, the cast and crew eked out two more weeks of rehearsal and boldly transformed the play from stage to screen.

Of course, it helps to have a brilliant script from which to work. Stephen Karam’s domestic comedy/drama has won multiple accolades, including the 2016 Tony for Best Play. His one-act drama centers on the Blake family’s Thanksgiving at the run-down Chinatown (NYC) apartment where Brigid Blake has just moved with her boyfriend, Richard. Brigid’s parents, Erik and Deirdre Blake, arrive from their home in Scranton, Pennsylvania, along with Erik’s mother Momo, who is suffering from Alzheimer’s. They are joined by the Blakes’ other adult daughter, Aimee, a Philadelphia lawyer. What starts out as a traditional annual get-together, however, gradually unravels into individual tales of struggle. The development is so subtle that its collective force comes as a jolt — even though you have witnessed every small step of revelation along the way.

The duplex apartment in which the drama plays out is odd to say the least. Paige Hathaway’s model of the two-level set — which was 75 percent built before being consigned to a dumpster — serves as the backdrop for the production. It is comprised of a first-floor room and bath connected to a basement kitchen and dining room by a spiral staircase. The apartment is illuminated, barely, by erratic lighting and a single barred window overlooking a cigarette butt–strewn alley — or as Brigid optimistically calls it, an interior courtyard. The moving truck has been delayed somewhere in New York, so the apartment is eerily bare. Worst of all are the disturbing noises that erupt now and then from the apartment above and a cringeworthy garbage compactor outside. Shadows pass in the alley from time to time.

The actors themselves, who were filmed in six different locations, occupy separate rectangular boxes, each enclosing not much more than a headshot. The boxes rotate, move, appear, and disappear on the screen as their characters move from upstairs to down, in and out of the bathroom, and into the kitchen as stage directions are read aloud by Graycn Mix.

The cast has their work cut out for them. How do you communicate love, connection, antipathy, or any other familial emotion when each character is so isolated from the others?

Fortunately, under the direction of Aaron Posner, the actors find their way. At first, the action may seem stilted. After all, both we and they must get comfortable playing without the benefit of body language, movement, theatrical lighting, and all the other elements we are used to experiencing in live theater. Gradually, however, the actors seem to reach way beyond the confines of their boxes and straight into our hearts.

Daughters Brigid (Dani Stoller) and Aimee (Kimberly Gilbert) may have the easiest time of it. Naturally animated, their strong faces convey a huge spectrum of emotion. Watch Aimee’s side of a heart-breaking phone call with her former lover, Carol. See Brigid struggle with Deirdre (Sherri L. Edelen), a devout Catholic who insists on bringing her unobservant daughter a Madonna statuette as a house gift. Feel Deirdre’s frustration over reporting to young bosses who make four times her salary. Note Erik’s (Mitchell Hébert) increasingly wan attempts to hold in his own pain, and watch Richard’s (Jonathan Raviv) wry efforts as peacemaker. Finally, witness the superb Katie Flye as Momo who punctuates her sad dementia with occasional struggles to comprehend her whereabouts. Regardless of whether she is babbling nonsensically, drifting half out of the frame, or joining lustily in a time-honored Irish ballad, she is a constant and beautifully articulated presence, reminding us of the indignities of old age and the burdens elders place on their families.

Had it just been a family drama, The Humans would have succeeded admirably. But it is also a poignant lament on the faltering, aging white middle class with disrupted retirement dreams and with the futures of their well-educated children far from assured. Deirdre and Erik, loyal, long-time employees, are staring into penury. Aimee is losing her law firm job due to her recurring illness, and Brigid, unable to land a professional position in music, fills in with bartending. Richard, who stands to receive a trust fund along with a social work degree in middle age, may be the family’s salvation, literally and philosophically. As he and Erik share their scary dreams with each other, he urges Erik to stare down his nightmares by walking through the menacing tunnels that populate them.

If there is anything lost in this noble attempt to produce The Humans online, it is the full effect of the Chinatown apartment, an important seventh character in this memorable play. The noises are perhaps less disquieting than in the stage version, the darknesses less ominous, the structural reminder of middle-class struggle less tangible. Yet this production shines with fine performances, brought directly into your own home during these most difficult times. 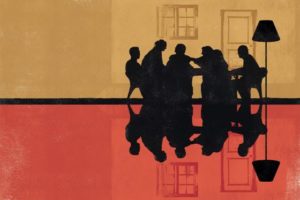 The Humans is available for streaming via the Olney Theatre Center website through October 4. Tickets are available for purchase online.