Screens will be lighting up all over Metro DC as theater lovers, supporters, and luminaries gather online for the 2020 Helen Hayes Awards Friday, September 25.

The red carpet unrolls at 6 pm sharp with a virtual parade of nominees and guest stars. (Viewers can pop in to show off their ceremonial rags or simply wave at the camera!) Click here at 6 pm for the red carpet on Instagram Live hosted by Felicia Curry and Rick Hammerly.

The main event begins at 7 pm on YouTube, with co-hosts Felicia Curry and Naomi Jacobson announcing the recipients in 11 different categories. Mixed in with the presentations will be guest appearances, reflections on people and ceremonies past, and even a few surprises.

Following the ceremony, ticket-holders can dance the night away—in the comfort of their own kitchens or hallways—at an afterparty on Zoom d by hosted by DJ Edward Daniels of Scorpio Entertainment.

Tickets are free, but registration, via TodaysTix, is required for both the main event and the afterparty. Click here to sign up and donate whatever you can to theatreWashington’s Taking Care COVID-19 Emergency Relief Fund.

Co-hosts Felicia Curry and Naomi Jacobson are two of DC’s most gifted actors. Both are also remarkable at comedy. And both are Helen Hayes stars.

Felicia received the 2018 Helen Hayes Award for outstanding lead actress for the role of Lela in Factory 449’s Lela & Co. Recently she starred as Undine in Mosaic Theater Company’s Fabulation, or The Re-Education of Undine.

Naomi has been nominated for dozens of awards over the years, most recently for the lead in Becoming Dr. Ruth at Theater J and for best supporting actress in The Remains at Studio. Her winning roles include being part of the ensemble of Cabaret at Signature Theatre and best supporting actress in Richard the Second at Shakespeare Theatre and in Dream of a Common Language at Theatre of the First Amendment.

I checked in on them to get a few hints about this year’s awards and the impact of COVID on the big event, originally scheduled to be held in May at the Anthem.

Ravelle: Felicia, you were a Helen Hayes co-host last year, and Naomi, you’ve had lots of similar hosting roles. But this one is totally different. Have you ever experienced anything like this before?

Felicia: This is my third time hosting the Helen Hayes Awards, and it’s always an honor and a privilege. I love hosting events and creating an atmosphere of fun and celebration. However, I haven’t hosted much on computer. As a result, I’ve enjoyed discovering how to translate the atmosphere of live performance to the virtual world.

Naomi: This is my first time hosting the Helen Hayes. I’ve been teaching on Zoom, and have hosted discussions with as many as 25 people, but I’ve never done anything like this!

Yes, this year’s ceremony is certainly different. In fact, it’s surreal, since you won’t even be in the same space! Apart from the obvious switch—from real life to virtual and from onstage to on screen—what are some of the subtle, and not so subtle, shifts you’ve had to make?

Felicia: It really is surreal. I believe the biggest shift is in the level of comfort that everyone is feeling. People are able to be in their own space and be surrounded by family. It allows us to be fully present and to enjoy the moment.

Naomi: I was so excited about hosting in May that I went out and bought a new gown. Unfortunately, it was strapless, which means that I can’t wear it on Zoom because it would look as if I had no clothes on. I know I can look elegant from a distance. The challenge with Zoom is finding something that looks nice close up. And having to do my own make-up makes it less glamorous.

Can you give us a hint of what to expect when we tune in? Specifically, what should DCMTA readers look for?

Felicia: Your readers can expect all the things they’ve come to know and love about the Helen Hayes Awards. It will be an evening of familiar faces, featuring highlights from the awards that have already been announced along with the ones we’ve been waiting for.

Those who tune in will be the first to know about a couple of new awards. And of course there will be a moment to honor and celebrate the man who started it all, our friend Victor Shargai. Oh, and you might see a costume change or two from me. Some things never change!

Naomi: Your readers will find entertainment and a few surprises!

Have the two of you worked together before?

Felicia: The only full production we’ve done together was Caroline, Or Change at Round House Theatre. However, I am absolutely ready for a Felicia/Naomi two-hander! [Calling all theaters and directors: who is getting first dibs?]

Right now, I just want to say how excited I am to be hosting with the one and only Naomi Jacobson! She is DC theater royalty, and I am over the moon to share the space with her.

Naomi: I’ve been an admirer of Felicia’s for years. We’ve worked together on a few readings and workshops as well as Caroline, Or Change. In that play, we didn’t have scenes together, but I was enthralled watching her perform. I’m a huge fan!!

Obviously, you couldn’t rehearse together, which is weird. How did you coordinate this?

Felicia: Well, we’ve had to coordinate through text messages, phone calls, and video dates. Rehearsals are different, but luckily we’ve had a great team putting the show together. Most important, I love any and every opportunity I get to connect with Naomi! We’re going to be fierce!

Are you aware of who the recipients are before the big event?

Felicia: Of course not! One of the things I love about being a host is that we get to share that initial excitement right along with the nominees. It’s thrilling to be able to open that envelope and see the expression on the recipients’ faces. There’s nothing like it!

Do you see a trend in the nominations this year?

Felicia: Yes! The most exciting part about this year is the incredible number of first-time nominees and the sheer number of theaters in the running. The DC theater community is vibrant, growing, and multifaceted, and it’s exciting to see that growth being honored this year.

Naomi: I’m so excited that so many theaters are represented! I’m also thrilled that so many performers from new plays are being honored. It shows how much innovation and support for new work exists in the DC area.

Based on this experience, what advice do you have for other actors who may—if this lockdown continues—need to rehearse and perform in their own remote worlds?

Felicia: It’s funny, but I don’t think my advice would be very different in this virtual world. I would encourage actors to embrace and lean into exactly where they are—both physically and emotionally—and allow that to be part of their storytelling.

I would also tell people to be kind to themselves throughout the process. Remember, it’s a brave new world and we are all navigating it together. “New and different” is scary, but it can also be the beginning of a kind of storytelling that transcends space and time. It allows audiences to connect with actors on a much more intimate level. And that connection is very exciting to me.

Naomi: Well, this is the new normal. I’ve sat in on information sessions with casting directors, and I’ve learned that very few of them will go back to in-person auditions. So I’d say to actors, Invest in good lighting, select a neutral background that compliments you, wear clothing that reads well on camera, and make sure your WiFi is secure!’

Is there anything else you’d like our readers to know?

Felicia: Yes, we are very grateful to theatreWashington for putting together a program that brings us together to celebrate all that the DC theater is, and all it will be moving forward. Bringing the awards to the virtual world has afforded all of us—nominees and presenters, hosts and community—the opportunity to connect with each other in a much more personal way.

Naomi: This is an amazing town for theater. And the Helen Hayes Awards ceremony celebrates the breadth and depth of our community. It allows us to see and appreciate the scope of our artistic contribution, both to DC and to the country.

Thank you, both! And everyone, tune in! 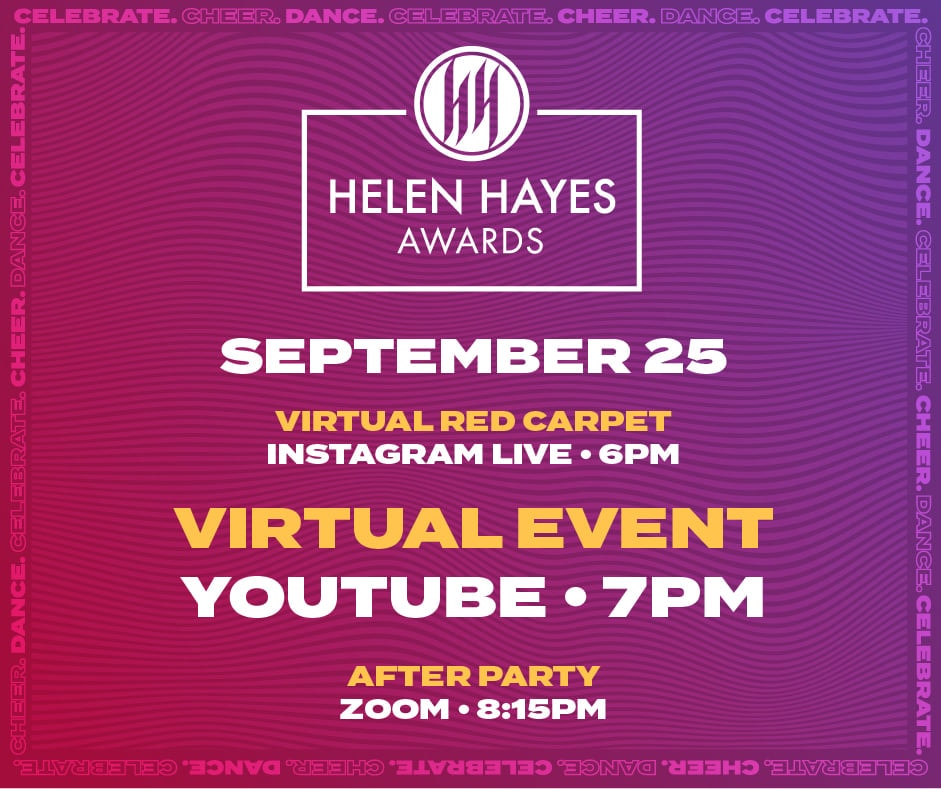 The 36th annual Helen Hayes Awards ceremony will be streamed on YouTube beginning at 7 pm on Friday, September 25, 2020. Tickets are free, but registration is required. Click here to sign up at Today’sTix and donate to theatreWashington’s Taking Care COVID-19 Emergency Relief Fund.