True to its mission—to present “socially conscious, thought-provoking work” that engages audiences “in active dialogue”—Theater Alliance has launched a series of eight short plays by eight emerging Black playwrights writing in response to the demands of the Black Lives Matter movement. With the stated goal of sparking action and promoting social justice, each of the plays relates thematically to “legislative changes that will address the systemic oppression of Black folx in America.” 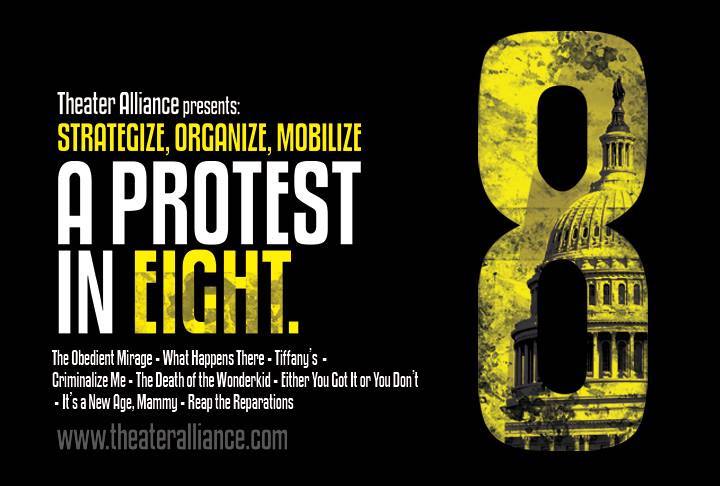 Collectively titled Strategize, Organize, Mobilize: A Protest in Eight, the series launched October 27, 2020, with “The Obedient Mirage” by Roney Jones, loosely touching on the theme of defunding police. Directed by Raymond O. Caldwell, “The Obedient Mirage” is a gripping, terrifically acted, fully cinematic 15-minute short set in the home of a Black police officer and his family. From outside, we hear tense chants of “Black Lives Matter!”—demonstrators protesting the murder of a young Black man by a partner of the man whose anguish we see before us. The stark, emotionally raw exchange between him and his wife and daughter resounds powerfully with themes of police accountability and responsibility to the truth. With “The Obedient Mirage,” Theater Alliance’s A Protest in Eight is off to an impactful start.

The plays run approximately 15 minutes and tickets are available by clicking here. For now, each of the plays can be viewed only at a specific date and time. (Future streaming options will be announced.) Following each premiere, Caldwell will talk with that night’s playwright live on the company’s Facebook page.

Themes and plays remaining in the series are:

It’s your favorite game show, “The Blackest of the Day!” Tune in to this game show spoof to see who our good friend Uncle Sam chooses to dole out reparations to. But be careful, one wrong answer will get your Black card revoked!

October 29 — REDUCING PRISON POPULATIONS
“What Happens There” by Savina Barini

Maria is running for District Attorney as a prison abolitionist even in spite of her traumatic past with Albert. As the two grapple with their shared history, they unlock compelling notions about prison reform.

Another late night at Tiffany’s, a magical diner for the underbelly of American society. Looking to hide, Neith stumbles into the diner and finds herself on a journey of self-discovery and transformation.

Every afternoon Mammy loves to tune in to her favorite show, but today something is different. The characters aren’t “shucking and jiving” like they normally do! A gripping satire, this short play examines the policy of stop and frisk.

Wonderkid, a child superhero has grown up in the public eye. He’s super-fast and a shining example for his community. Now as a grown up, has the world changed? Is there space for a Black superhero in a world that views protestors as villains?

How do young people navigate a system that doesn’t validate their humanity? Wisdom has a secret she’s been keeping from her best friend Rah. That secret could rock the foundation of their friendship, school, and community. Who can she tell?