As the pandemic continues to take its toll on live theater, smaller-budget theaters are staying nimble and daring, thanks to generous support from donors. One of these deft companies is Spooky Action Theater under the leadership of founding artistic director Richard Henrch and Gillian Drake, director of New Works.

Spooky Action is currently producing a workshop of To the Earth, a new work by DC-area playwright Brett Abelman,  streaming for free until November 1, 2020, on the Spooky Action YouTube channel. 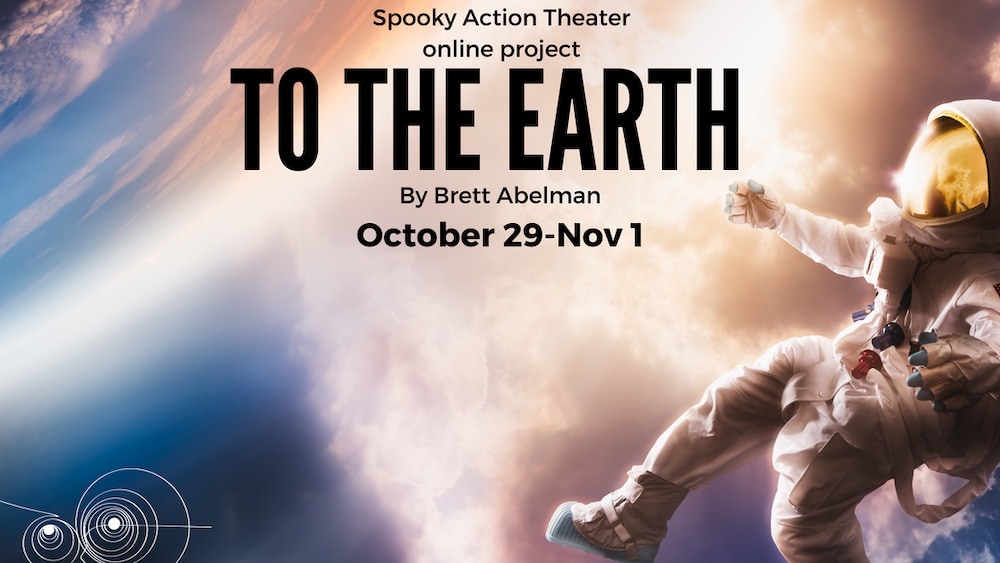 For those with a vivid imagination and an interest in something fresh, To the Earth can take a viewer into a far-away realm somewhere beyond Mars to what might be an encounter with not only the unknown but extraterrestrial life as well.

Are aliens a negative force to fear or are they beings to reach out to, to admire and befriend? To the Earth is a psychological excursion for those willing to give up their sense of reality in order to “feel” what might be the miraculous. After all, what is fiction or truth anyway?

“We were excited by the scope and ambition of To the Earth—a play that takes us to the outer reaches of the solar system and back!” said Henrich in a recent conversation. “We love a challenge, and we leapt at the chance to explore ways to tell this epic tale using the tools and techniques of a virtual theater we are now in the process of inventing.”

In Abelman’s sci-fi play, a large crew of 89 drawn from all the peoples of the Earth embarks on a unity mission, reaching far into space. Their space craft is The Unity. Then, in an instant, one catastrophic encounter sends five survivors escaping in a desperate struggle together to reach Earth and home. As their options narrow, the rifts between them deepen, loneliness and fear grow, and leadership comes under assault. There is pressure to break a deadlock between the five crew members that falls on the no-nonsense pilot who seems at first to shy away from having and using power. The question that hangs throughout the play is how to decide the fate of the crew and perhaps Earth. Is there only a binary choice, life or death?

To the Earth is directed with a wonderfully wide-eyed approach by Helen Hayes recipient Kelly Colburn,  who has gathered together a five-member cast including Kyosin Kang, Lolita Marie, Mary Myers, Tuyet Thi Pham, Alejandro Ruiz, and Jacob Yeh. Each of the ensemble leaves an impression of their character’s interior being and outward behavior along with some appealing accents that add to the “international” flavor of the The Unity crew in a small lifeboat of sorts. Over time, several crew members are more vivid than others or have more noteworthy arcs. An earthbound narrator regularly intrudes with a Top-40 radio DJ demeanor that might leave some cold.

Spooky Action deserves praise for taking on a new script with a workshop presentation. The To the Earth film crew and post-production crew accomplished appealing work.

But, as the script progresses onward to a live production, editing to reduce its current 2½-hour run time would be expected. To the Earth will not be for everyone. Those with a serious case of Zoom fatigue may find themselves fidgety. Those who find sci-fi not their usual taste might drift away and return to MSNBC. But for others who want new escape, you have only until November 1.

There is one scene as the workshop production took hold of me that I screened with rapt attention several times. It includes facial expressions that are so very emotive and disarming. You’ll have to see it for yourself.

So shut out the real work for a time. Get your fright-season mindset on. Even view To the Earth without artificial lights on and the blinds closed. It gets spooky in its own way.

For details on viewing To The Earth from Spooky Action Theater, visit www.spookyaction.org for information or call 202-248-0301.