Round House Theatre, in association with McCarter Theatre Center, has launched its digital series of works by Adrienne Kennedy with the enigmatic He Brought Her Heart Back in a Box, directed by Nicole A. Watson. By mid-December, we’ll have enjoyed an unprecedented opportunity to experience four works by this hugely influential, socially conscious, and artistically bold Black playwright, all filmed on the Round House stage and enhanced with digital wizardry. 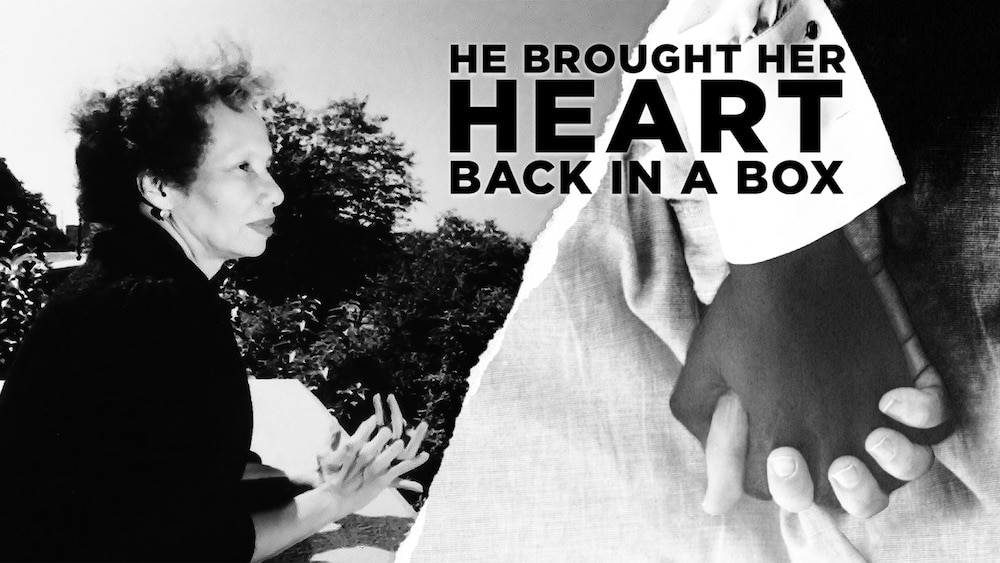 First produced in 2018, when the celebrated playwright was a mere 86 years old, He Brought Her Heart Back in a Box is a poignant one-act drama that unspools through letters written between lovers Kay and Chris, an interracial couple trying to escape from the segregated small-town depths of Georgia in 1941.

Kay’s and Chris’s letters speak not about love but about the horrors of the Jim Crow South that have brutalized both of their lives. Chris’s powerful father, Harrison Aherne, whom Chris both loathes and adores, perfected the architecture of segregation in the fictional community of Montefiore. He’s carefully parsed Blacks from whites in the layout of the town, the theater and schools, at water fountains, and in the graveyard. He indulges his own “birthright” by siring three children with Black women, then bestows decent clothes, schooling, and even a piano on his mixed-race offspring. Harrison’s techniques for subjugating an entire race were so admired by the ascendant Nazis that they invited him to Germany.

Tortured by his legacy, Chris, an aspiring actor, moves to New York and dreams of spiriting Kay off to Paris where their relationship would be tolerated. Kay, a graduate of the town’s Black boarding school started by Chris’s father, is now in college. She is haunted by the death of her mother, a raped teenager who killed herself or was murdered five days after Kay’s birth. The grisly folklore surrounding her mother’s fate gives the play its title. Unlike Chris, who lives surrounded by the generations-old material culture of his family, and stands to inherit much of it, Kay’s family has left her nothing except unanswered questions.

Within its astonishingly short running time, Kennedy weaves in other love stories upended by uncontrolled violence, including speeches from Christopher Marlowe’s 1593 drama The Massacre at Paris and a poignant ballad from the 1940 film version of Noel Coward’s operetta Bitter Sweet. Racial injustice, of course, knows no bounds in time or space. And yet, these obscure allusions may be lost on many viewers. Rather than elucidate Kennedy’s intent, they can lead us off-track, wondering if we are missing her larger meaning.

The design of this production sometimes helps us divine Kennedy’s message and other times not. Kay and Chris speak from a bare, neutral stage. Many of the props used in the fully articulated version — Kay’s boarding school, a flight of stairs, and the Jim Crow railroad car that carries her North — are reduced to tiny hand-held models. They seem to be more like curiosities than clues. At other moments, the creative team’s digital magic draws us headlong into the action. We’re whooshed into the boarding school’s basement storage area where Chris’s father stores horrendous artifacts of the segregated town he built. A thoroughly menacing projected image of Chris playing the senior Aherne follows Kay north, each in a segregated train car.

Despite the play’s potential to confuse, the actors themselves are superb, giving us much-needed solid ground from which to understand the impact of their backgrounds. With the merest knit of her brow or a gentle sidelong glance, Maya Jackson as the 17-year-old Kay projects caution, fear, modesty, and hope. As Chris, Michael Sweeney Hammond establishes his complex character with authority. At turns loving, idealistic, ambitious, and ironic, he accepts aspects of his upbringing even as he plots his escape. He’s buried his mother on that very day, bitterly describing a woman who handled her own rage over her husband’s dalliances by quoting Robert E. Lee and comparing herself to Dido, who in Greek legend commits suicide after having been abandoned by her husband. When Hammond plays his own father on the train, he summons the steely meanness of Harrison Aherne’s authoritarian core.

You may not absorb all that was intended on a first encounter with this haunting play. But having bought your ticket, you are free to watch it more than once. If you do a bit of research on Marlowe, Coward, and Kennedy herself, and then watch it again, you will no doubt unlock many of its mysteries, and savor the cast’s sterling performances even more.

The Work of Adrienne Kennedy: Inspiration & Influence features four plays, which will be released between November 14 to December 12, 2020. Each play will be released on a specific date and will be available to view on demand until April 30, 2021. Tickets can be purchased by calling 240-644-1100 or ordering online at RoundHouseTheatre.org.