When Ohio State University invites the distinguished author Suzanne Alexander back to her alma mater, she is asked specifically to lecture on the theme of violence in her works. Brace yourself, Ohio State. You will soon learn that the university itself is the miasma from which Suzanne’s tortured characters emerge.

Suzanne sits in the university library putting the finishing touches on her lecture, a reminiscence of her undergraduate years. Black students were scarce in the early 1950s, but their tiny population faced formidable limitations. The silent but powerful geography of race demarcated which campus neighborhoods were appropriate for Blacks and which were off-limits. Even academic disciplines were exclusionary. Dazzled by her 19th-century British literature course (and the young professor who taught it), Suzanne wished to be an English major. But English was not a discipline open to Black students. They were deemed incapable of mastering the subject. Instead, she was siphoned off into Education, a major she detested.

Beyond the matter-of-fact racism that tinged her day-to-day life in Columbus, Ohio, Suzanne stepped across an even more forbidden boundary when her brief affair with English professor Hampshire (who reads beautifully from Thomas Hardy’s uber-romantic Tess of the d’Urbervilles) results in the birth of twin daughters.

The play is structured primarily as a soliloquy as Suzanne practices her paper aloud in the university library. Interspersed with her recollections are scenes featuring her undergraduate self. The difference between the older Suzanne’s straightforward recitation of her travails and the flashbacks in which she actually experiences the horrors form a mesmerizing dance between past and present. We witness the abominations of real time laced together with the ways in which the same individual, in late middle age, deals with her lived experience.

As is often the case, Adrienne Kennedy transforms the raw material of her own life into the stuff of powerful drama. Alexander is Kennedy’s alter ego and is the subject of several plays. Through her, Kennedy explores the racism that she experienced at Ohio State after enjoying childhood in a relatively integrated Cleveland neighborhood.

Fine acting and excellent direction by Valerie Curtis-Newton bring this chapter of Suzanne’s story to life. Lynda Gravatt as the older Suzanne dignifies the writer’s traumas with forthright strength. Billie Krishawn as the younger Suzanne is beautiful and dewy, naive, sensitive and brimming with empathy for Hardy’s doomed heroines. Rex Daugherty, an actor of enormous range, plays Hampshire as equal parts showman, cad, and coward. Rejecting paternity, he indulges in yet another racist trope. Surely, he snarls, Suzanne has had many partners. Ultimately, he is protected by the fortified walls of white academia while the victimized Suzanne is cast out of campus life. What support Suzanne has in this cruel world come from three minor but well-etched characters: Aunt Louise (Andrea Harris Smith), fellow student Iris Ann (Heather Gibson), and future husband David Alexander, played by Yao Dogbe, who also steps in as Val.

Ohio State Murders is the third of four productions in the series The Work of Adrienne Kennedy: Inspiration and Influence, a festival of Kennedy’s works produced by Round House Theatre in association with McCarter Theatre Center. Often cited as a major force in experimental theater, Kennedy is revered as a playwright and a teacher. Beyond those crucial roles, her works provide an extraordinary and highly personal window into the systemic racism that punctures the lives of even our most gifted Black writers. Luckily for us, Kennedy is willing to share her stories. They lend considerable weight to the slow bend of our moral arc toward justice.

The Work of Adrienne Kennedy: Inspiration and Influence features four plays, released between November 14, 2020 and early January 2021. Each play will be released on a specific date and will be available to view on demand until April 30, 2021. Tickets can be purchased by calling 240-644-1100 or ordering online at RoundHouseTheatre.org 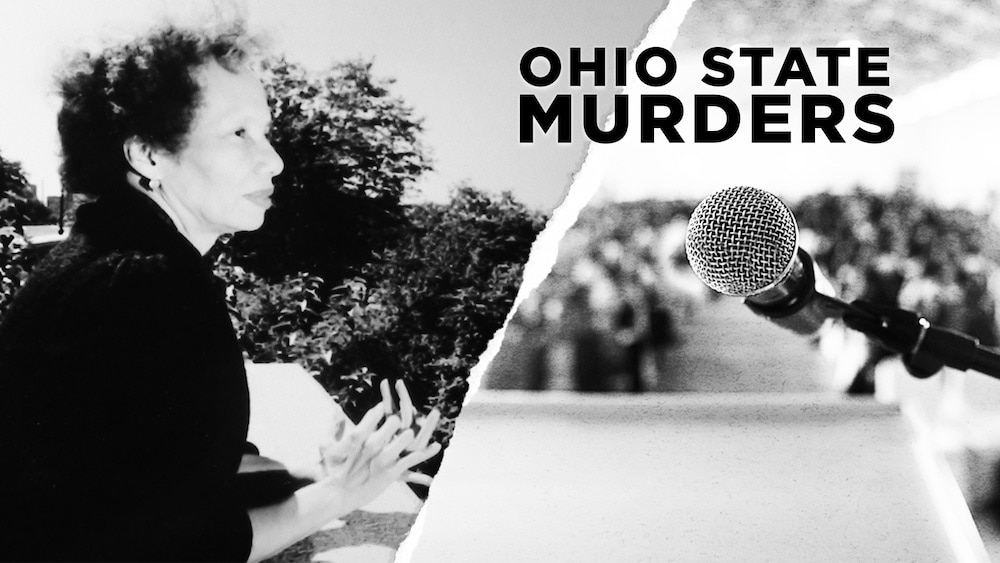