Strand Theater Company’s production of Miss Bennet: Christmas at Pemberley is a delightfully theatrical sequel to Jane Austen’s classic novel Pride and Prejudice. Written by Lauren Gunderson and Margot Melcon, it finds all but one of the Bennet sisters gathered at Darcy and Elizabeth’s estate at Pemberley to celebrate Christmas. The plot focuses on middle sister Mary, now living alone with her parents and becoming an intelligent, talented young woman yearning for more than her books and music. Another guest may offer what she hopes. Directed by Erin Riley, with technical direction by Theresa Olson, it is in the perfect spirit of the holiday season.

In this streaming production, the actors appear most of the time in separate boxes, with a few brief scenes of two of them together. Volcano Jones is a pleasure to watch as Mary, bringing a keen intellect to the oft-overlooked Bennet sister, interested in knowledge and able to discuss her passions with anyone. She begins the play peevishly finding fault with everything, but soon becomes charming and engaging. She speaks her mind to Lydia (Betse Lyons) and later stands up to herself against a bully, as well as offering passionate encouragement to one feeling trapped by responsibilities. This is an admirable Mary, having mixed her own good qualities with those of her elder sisters.

Emily H. Gilson gives Lizzy a wit and independence, bringing the German custom of Christmas trees to Pemberley. She also stops the argument between the sisters. Alexander Kafarakis gives her husband Darcy a keen wit. Unfamiliar with the tradition of ornamenting Christmas trees, he responds, “I didn’t realize they needed dressing.” He also gives good advice about love. Marriage has clearly mellowed him.

Julieta Gozalo plays Jane with sweetness and light, eager to help her sisters. She offers one of them a way out of her difficult situation. Justin Johnson gives a good humor to her husband Bingley, always smiling and delighted at where he is. Betse Lyons brings a youthful flirtatiousness to Lydia, coming to Pemberley with only her dog Robin, played by Fado, as her husband Mr. Wickham is not welcome. Her attempts to provide “entertainment” throughout her stay are a source of drama, hiding a deep loneliness at home. She and Jones have a heartful conversation that brings them closer.

O’Malley Steuerman plays Arthur De Bourgh, Darcy’s relation, with a charming awkwardness. Well read and intelligent, he finds himself uncertain of the new responsibilities thrust upon him, and unfamiliar with the social graces. Steuerman and Jones have excellent chemistry together, talking eagerly about books and ideas, and clearly meant to be together. Emma Hooks brings a comic touch to Anne De Bourgh, once intended for Darcy and now bursting in with a scheme for her future. Fast talking, she makes disparaging comments about Lizzy’s decorations and ropes in others to her plans, not giving them a chance to argue. Underneath her breezy superiority, though, lies a fear about her place in life, which comes to the surface.

Costume Designer Sarah Walsh has created period-appropriate outfits that help distinguish the characters, even when only part of them is visible. Arthur wears a top hat, while Lydia wears a bonnet. Properties Master Jennifer Swisko Beck completes the period atmosphere with books, quill pens, letter paper, and other items. Graphic Designer Mika Nakano fills the background with appropriate settings, such as the library, study, and sitting room, as well as lovely cards that pop up in between scenes to set the next one.

Music Director Donna Korn provides charming inter-scene music, and piano music for Mary to play. She also plays the Christmas music the cast sings before the show begins, during intermission, and just after. Theresa Olson does a wonderful job as technical director, keeping the video running smoothly and seamlessly, making it feel less like a Zoom call. Erin Riley does the same as director. The actors navigate this online stage well, interacting as though they were all onstage together. Miss Bennet is a charming production, sure to entertain those familiar with Austen’s novel and newcomers alike. Sunday December 20, 2020, is the last performance, so catch it while you can! 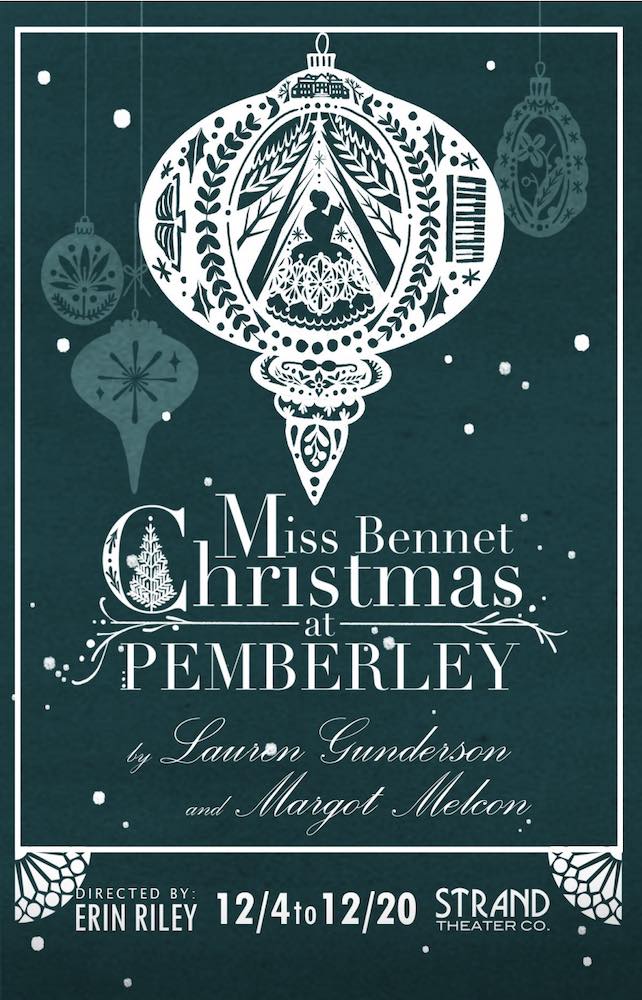 Miss Bennet: Christmas at Pemberley is livestreamed through December 20, 2020, on the Strand Theater Company website. To purchase tickets or for information on this and future productions, please visit their website.