Spooky Action Theater’s utterly charming production of The Lady from the Village of Falling Flowers—a recently discovered early work by Tennessee Williams directed for puppets and people by Natsu Onoda Power—has been redesigned for viewing on YouTube through January 14, 2021. 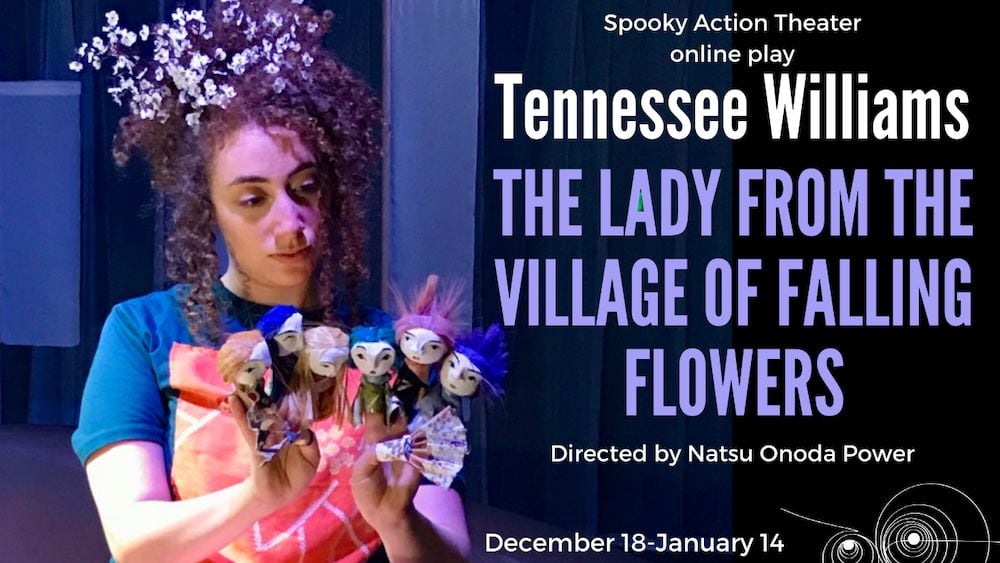 On the occasion of this digital remount of a delightful fable about love, we rerun John Stoltenberg’s interview with Power when the production was in previews.

Sitting in the front row in a child-size chair, I watched a puppet show based improbably on a play by Tennessee Williams. The occasion was a preview at Spooky Action Theater of a never-before-produced script that Williams wrote as a university student and titled The Lady from the Village of Falling Flowers. Subtitled “A Japanese Fantasy in One Act,” it had been mounted in miniature by Natsu Onoda Power, who not only directed and designed it but built almost every bit of it.

“I’m very crafty,” she joked as we chatted in the theater afterward.

The play will have its world premiere September 26 to 29, 2019, at the Tennessee Williams Theater Festival in Provincetown, Massachusetts.

Renowned for imaginative stagings that include her Helen Hayes Award–winning adaptation of Ursula K. Le Guin’s The Lathe of Heaven, Onoda Power was approached by David Kaplan, the festival curator and cofounder, to do Falling Flowers utilizing kamishibai, a Japanese art form that translates as picture play. “The script invited some sort of unusual visual treatment,” Onoda Power said. “And they were specifically looking for people who knew kamishibai.”

Onoda Power knew the form well. She had been using kamishibai as inspiration for several recent multimedia works. For each of the three scenes in Falling Flowers, she amplified and enhanced it.

“Kamishibai is usually a set of illustrated placards with narration on the back. You flip it to reveal different pictures to tell the story,” she explained. “Falling Flowers starts out in the first scene looking like traditional kamishibai then introduces cut-out two-dimensional puppets. Then in the second scene it moves to miniature three-dimensional puppets. And in the third scene we use Noh-inspired masks—not worn on the performers’ faces but held in their hands and operated like puppets to tell the story.”

Drawing inspiration from the 11th-century Japanese classic The Tale of Genji, Williams wrote Falling Flowers about an Emperor who enlists his Prime Minister to help him find a wife. The Emperor expects her to be a wonderful poet. He won’t settle for anyone who isn’t. Eventually he finds the Princess poet he’s looking for and they fall in love.

“There are many layers of meanings in the progression of the characters’ representation from illustration to cut-out puppets to full-size,” Onoda Power explained. “I thought that for Williams, Falling Flowers was an experiment in storytelling. I imagine him writing it like an exercise. He was taken by this ancient Japanese text and wanted to do his own version of it. I wanted to do something similar: a study in different forms of storytelling that I am actively borrowing.

Nobody familiar with Williams’s body of work would think Falling Flowers part of it. And one wonders how many other works he put in the drawer that were also not what we think of as Williams. “This is like a delightful surprise, that he was even compelled to do it,” Onoda Power said. Her staging of Falling Flowers is a form of “honoring his imagination,” she said, “boldly approaching different forms and then using them.

“There’s another reason behind the multiple modes of representation,” she continued. “This is a text that if someone were to write it today, they may be accused of cultural appropriation. It’s Tennessee Williams essentially writing in the Japanese voice. And because we’re putting it up in the contemporary U.S., there are some challenges. Like who’s going to play these characters if we do it with humans? Do they have to be Japanese actors? Except these characters are hardly authentically Japanese—and what’s authenticity anyway? However, if we do it with puppets and not just one set of puppets or one set of illustrations but multiple, then we see many different ways in which we perceive these characters, all of which constitute the complex figures that these characters are.”

The cast of three—Dylan Arredondo (The Emperor), Jared H. Graham (The Prime Minister), and Melissa Carter (The Lady and The Princess), all alumni of the National Players touring ensemble—had worked with Onoda Power before. At the preview I saw, they seemed completely in sync with the performance style, the language, the puppetry, Onoda Power’s vision, and one another.

“I often think about many versions of ourselves,” Onoda Power reflected. “We present ourselves in so many different versions in our daily lives. And all these versions are true. I wanted to play with that idea with multiple puppet possibility.”

This esthetic approach also gives context to the gender politics of the play. “I felt that many different forms of puppets could give us a meta commentary about that,” Onoda Power said. “We think we’ve come so far in the way we speak about gender or we enact gender, but we’re not yet in full human form. We’re in the closer-to-human but still masked-puppet phase. The transformation of performance styles in the three scenes is a record of a gender discourse.”

I noted that the three actors seemed to put air quotes around much of what they said—notably Melissa Carter as The Lady and The Princess. When she’s reacting, you can see that she’s commenting all the time. Onoda Power shed light on that.

“There’s a line at the top of the third scene where the Emperor asks, ‘Are you a princess?’ And she says, no, ‘I’m just a stupid woman.’ We wanted to inflect that line with ‘because everybody said so.’ ”

Besides working out the presentation conceptually, besides working with the performers on acting style and props, Onoda Power also designed and constructed everything—the puppets, the toy stage, the placard paintings, the masks—it’s all her handiwork (except six cute little princess finger puppets that Carter offered to make and wears in scene two). Onoda Power possesses an extraordinary synthesis of conceptual and dramatic artistry with mechanical and sculptural dexterity.

“I don’t think I can separate them,” she told me. “A lot of the ideas come while I’m making things. Also, in rehearsals as we work with things, sometimes the objects give you ideas. You don’t know until you have the puppet in your hand what it’s going to do.

“I usually do the first phase of rehearsals with mockups. Then I take a little time between the initial rehearsals and the final set of rehearsals to make everything. For this one, we had three days of workshop in July and then we didn’t really come back until four days before preview. I had a month and a half in between for me to figure things out.”

When the show goes on the road to Provincetown, it will be set up for outdoor performances and taken down at night. It’s all compact and transportable. “Everything fits in a suitcase,” she said. “Everything is built to fit exactly. Everything has its compartment. And I made custom pillows for each piece, so for instance, each mask has a little cushion that closes with Velcro and protects it.”

The family-friendly show runs about 35 minutes. It has grownup themes, it’s not a children’s story, but it’s told as if it were, which is both disarming and engaging, and it’s totally accessible. A kid could watch the show and be inspired go home and write a poem.

What makes The Lady from the Village of Falling Flowers seem like Williams of the future, a precursor of his work to come, is its reverence for imagination and the poetic soul.

Running Time: About 35 minutes, with no intermission. 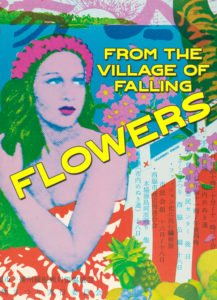 The Lady from the Village of Falling Flowers was produced by Spooky Action Theater and was performed in previews September 21, 2019, at Spooky Action Theater – 1810 16th Street NW, Washington, DC. The play had its world premiere September 26 to 29, 2019, at Wa Garden, 220 Commercial Street Provincetown, Massachusetts, as part of the Tennessee Williams Theater Festival.