On Monday, January 11, Off-Broadway’s Red Bull Theater will premiere its live benefit reading of Twin-Cities playwright Carlyle Brown’s 1987 work The African Company Presents Richard III at 7:30 pm. The momentous drama, based on a true incident in the history of America’s first-known Black theater company in NYC, considers the issue of racial discrimination in the theater community in the early 19th century, six years before the final abolition of slavery in New York state in 1827, 42 years before the Emancipation Proclamation of 1863, and half a century before Black Americans had the right to vote.

The play is set in September 1821, when two rival theater companies in Manhattan – one Black and one white – simultaneously scheduled productions of Shakespeare’s Richard III. Established that year by retired West-Indian steamship steward William Henry Brown, The African Company – where James Hewlett (the first African-American Shakespearean actor) and the legendary Ira Aldridge (who went on to achieve acclaim on the stages of London and throughout Europe) were among the principal players – was attended by both Black and white audiences, drawing patrons away from Stephen Price’s uptown white-owned Park Theatre. That popularity resulted in threats, bribery, false accusations, and manipulation of the law against The African Company, as the troupe made the decision to continue its performances.

Red Bull’s Founding Artistic Director Jesse Berger noted, “The battle in this country over who gets to tell Shakespeare’s stories – and who should – has raged . . . up to our present day. Carlyle’s play gives us a personal and poetic window through which to look in on our ever-present racially charged past, helping us better understand our own times, and how we all might think about who gets to tell whose stories.”

The playwright also addressed the present-day relevance of his compelling subject. “We now live in an era that is reflective of early 19th-century America. We are becoming a world as our early American world began, as a multicultural world. We are living in a world, where, at the very least, artists, anyway, are making culture out of cultures. And we are seeing in the world today not just a clash of cultures, but unification,” Brown said. He went on to posit, “Who owns Shakespeare one might ask? You might as well ask who has the right to breathe, to dream, to express themselves, to be themselves, to live in and make a meaningful contribution to their world. I submit to you that as human beings this is an obligation and responsibility for all of us.”

The timely reading will be directed by Carl Cofield and performed by Clifton Duncan, Edward Gero, Dion Johnstone, Paul Niebanck, Antoinette Robinson, Craig Wallace, and Jessika D. Williams. It will be supplemented with an interactive post-performance Bull Session webinair discussing the play and its themes with Brown, Cofield, scholar Marvin Edward McAllister, and members of the company on Thursday, January 14, at 7:30 pm. Registrants will receive a link to participate in this vital conversation. 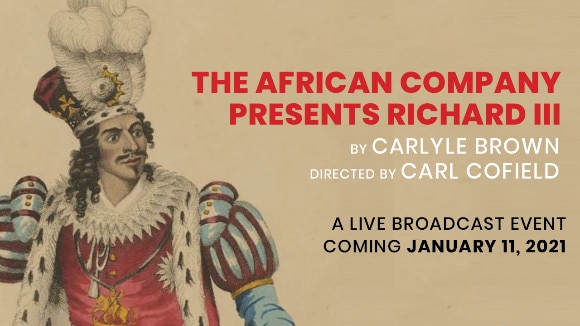 The African Company Presents Richard III streams live at 7:30 pm, on Monday, January 11. The event is free, but tax-deductible donations ($25 suggested) are welcome to support the ongoing work of Red Bull Theater. Advance reservations are recommended to receive a reminder with the link to the livestream. A recording of the reading will be available until 7 pm, on Friday, January 15.