What does a gay man call another gay man to whom he is committed? The character Cal in Terrence McNally’s Mothers and Sons gropes for the right word:

Andre and I were what people called “boyfriends” then [before marriage equality]. Or partners. “Lovers” was another word people used. We didn’t like any of them. “Boyfriends” sounded like teenagers, “partners” sounded illicit. They all seemed insubstantial, inadequate. Then along came the new-but-old-and-obvious name for it. It’d been there all along: “husband.” Who would have thought!

Audiences will hear those stirring lines in MetroStage’s streaming reading of McNally’s Mothers and Sons (2013), which will be, said Producing Artistic Director Carolyn Griffin, “a MetroStage tribute” to the four-time Tony Award winner. “Our reading honoring the legacy of McNally, who died of complications from COVID in March, seemed particularly appropriate—a wonderful recognition of both McNally’s work and MetroStage’s history with him as well.”

MetroStage, making its foray into streaming, used the social platform StreamYard to rehearse, tape, and edit Mothers and Sons with the talents and skills of Video Editor Wendy Roome.

“I’ve always been a big admirer of the work of Terrence McNally,” said Director Stefan Sittig. “He has expertly chronicled the experiences of gay men over the last half century — including the fight against HIV/AIDS, a fight that made us all more aware, stronger, and more resilient than ever as a community.

“As a gay man who came of age alongside the rise of the AIDS virus,” added Sittig, “I wouldn’t have made it emotionally or physically without McNally’s work. He was there through it all, as a sort of dramatic sherpa, guiding gay men like me, from my youth to my middle age with his plays and books of musicals, while at the same time helping straight parents understand, accept, and embrace their LGBT children.”

Giving hints to what viewers can expect, Sittig noted that “the title says a lot; it’s a play about generations, about mothers and sons reconciling the mistakes of the past and coming to terms with a changing political and social landscape.”

McNally’s Mothers and Sons opens as Katharine, the mother of a son (Andre) who died of AIDS nearly a decade before, pays an unexpected, unannounced visit to Cal, the former lover of her son. The setting is New York City. The play is set a decade since Andre died; what was once not legally possible, same-sex marriage, is now legal. Cal is married to Will, and they have a young son, Bud.

For Dulaski, this is a first foray into the streaming format. She “had never done a production on a social media platform before. It was very challenging and also very rewarding because we were all ‘on the same page’ with this new format.”

Dulaski added that “technically it is very challenging. Since you are doing this from your home studio and computer, you have to make sure, for instance, that your background in the shot fits in with everyone else’s.”

Dulaski added that means talking “to the other person straight to your camera like he or she was there, instead of to the left of your eye periphery where the other actor can be seen. You also have to make sure your lighting coincides with everyone else’s during the scene. If your light is brighter than anyone else’s, then the focus might be on you when it should not be.”

As for her character, the mother Katharine, she “comes across as a very angry, bitter, and lonely woman at the beginning of the show.” But “with the amazing dialogue of Terrence McNally, we come to realize what has made her this way as she has gone along in life. She is an extremely complex character. Her complexity comes out through the dialogue with the other characters as the play slowly weaves through her years of pain and aloneness.”

Dulaski noted the play is “so very revealing of who Katharine truly is and what has happened to her during the years.” As Katharine says, “I’m confused. I’m frightened.”

Story called Mothers and Sons “beautiful and complicated. I have always thought it should be done in DC.” Story described his character this way: “Cal is a very successful middle-aged gay man. He has a husband (14 years younger) and a child. His former lover (Andre) died of AIDS. He is confronted by Andre’s mother in this play. Cal is sensitive and capable. He has done very well in the world and he seems to be prepared for anything. This unexpected meeting with his former lover’s mother challenges him and makes him confront how he remembers and reconciles his past.”

Without giving the play’s details, Story added this: “Cal finds the strength to let go of a shred of his need for approval from the heteronormative world. This part of the play moves me so much. I think so many gay/queer/trans folx have spent lifetimes trying to fit in and placate. There is a moment in this play where a tiny crack forms and Cal seems to relinquish some of that. Maybe it isn’t radical. But I relate to it. And it moves me.”

Ewan Chung, who performs as the younger husband of Story’s character Cal, described Will as ”a published writer and a stay-at-home dad, very much a homebody. He has the experience of being the odd man out, since he had never met Andre before and is now meeting Katharine for the first time.”

Chung concluded, “This is definitely the most confident gay role I have ever read. Will doesn’t have any of the 20th-century emotional baggage informing who he is.” 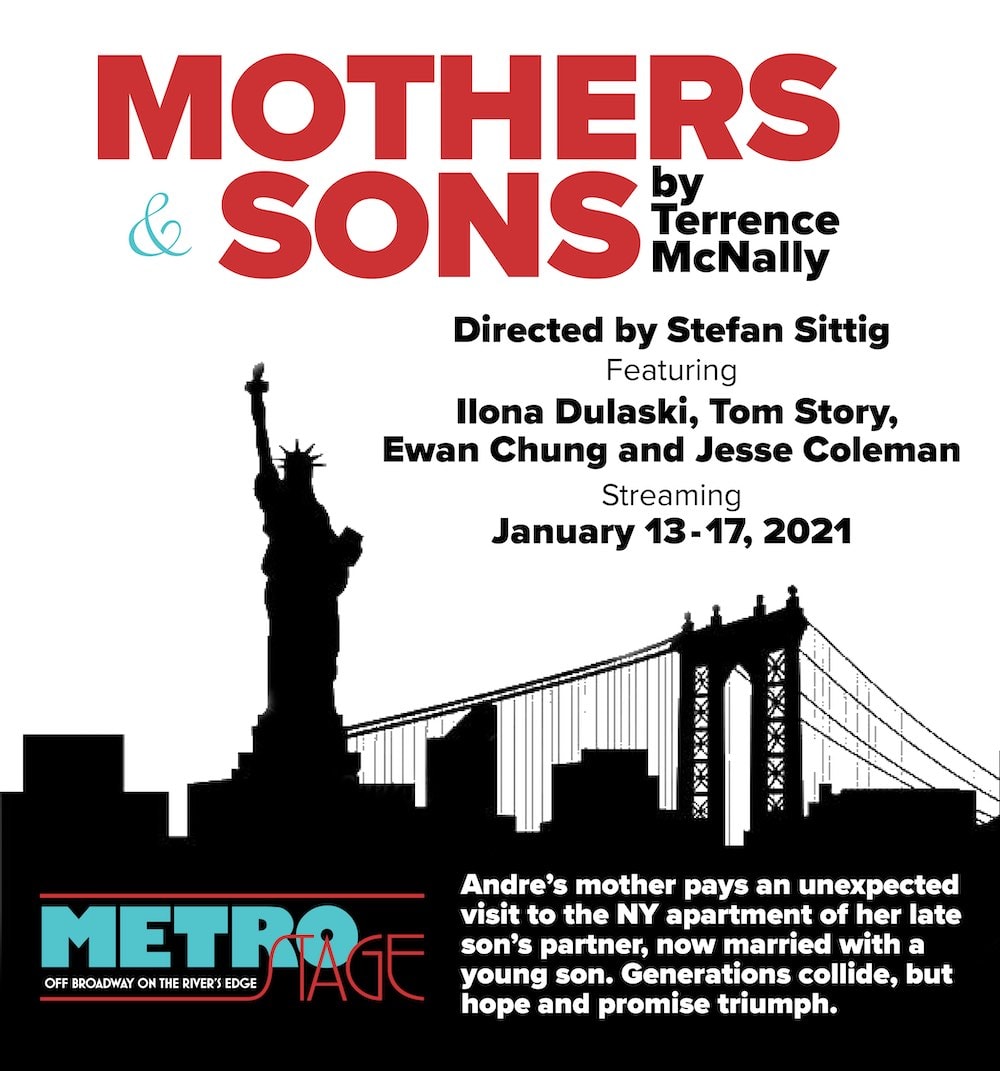 The late playwright McNally was the recipient of 2004 Helen Hayes Tribute award recognition:

MetroStage is one of the DC area’s professional theater companies, having first produced in 1984. (Full disclosure: I was on the MetroStage Board from 1987 to 1991, including a stint as board president.) A new MetroStage theater venue is in the works in Alexandria, Virginia. According to Producing Artistic Director Carolyn Griffin, the new theater design “has been completed by our architect in collaboration with the condo architects, since there are many interconnected pieces to this puzzle (since this is a hotel being converted into condos and a theater). It is an exciting prospect for MetroStage to have a beautiful new theater, still small and intimate but with state-of-the-art technology including an advanced air filtration system that is now necessary as a result of COVID. Our Capital Campaign to raise $1,000,000 to outfit and complete the theater has officially begun so donations are being gratefully accepted.” More information is here.