When I interviewed Ken Ludwig about his latest play, Dear Jack, Dear Louise, which opened at Arena Stage more than a year ago, I was curious about his parents—the Jack and Louise of the title—and the wartime correspondence on which it was based.

At the time, Ludwig lamented the loss of letter-writing as an enormously private—and frequently eloquent—form of communication.

I, on the other hand, marveled at the play’s ability to project a personal pursuit onto a public platform. (Click here to read the story that emerged.)

Today, the situation is stunningly reversed. The stage, like every other public platform, is shut down, prey to the pandemic that continues to erode most traces of public life.

Happily, the letters have been resurrected by Arena and repurposed as an epistolary package called the Love Letter Experience. The project, which captures the romance of the time, consists of a series of letters, each a perfect facsimile of the original, mailed one at a time to subscribers.

Last week, I caught up with Ludwig over the phone as he mused about some of the consequences of COVID, the drawbacks of email, the writing process and the Love Letter Experience.

We began with the lockdown and its consequences.“It’s so isolating,” he said. “I rarely leave the house. Like everyone else, I’m overwhelmed by the need for public connection.”

As a result, he has begun sending hand-written letters.“Email is too impersonal,” he explained. “And it’s dangerous, since you never know who will see it.” Hand-written or manually typed letters, on the other hand, are intrinsically private. They are also evocative.

“When I look at my mother’s handwriting, I think of her bubbly personality.” The playwright’s father wrote in a more formal fashion. “He had two fountain pens, both Mont Blancs. When he died, I inherited the pens and began using them.”

Even for writing plays? I asked. Ludwig laughed out loud. “No, of course not,” he said. “For work, I start with a Sumo Grip Mechanical Pencil and write in longhand on a legal pad. Then I use a Pilot Fine Point Pen, in black or blue, for the rewrites.”

We turned to the Love Letter Experience. The series—like the hit play on which it is based—is set in the years between 1942 and 1945. As such, it is painfully relevant in today’s world.

“World War II is a metaphor for the uncertainty before us,” Ludwig said, pointing out that people were separated, then as now, by events they could not control.

“Nobody knows how this will play out,” he added. Normally, in non-COVID time, the longtime DC resident would be sandwiching new plays between trips to New York or London, where previous plays, such as Tony Award winners Lend Me a Tenor and Crazy for You, are constantly in revival.

Dear Jack, Dear Louise had its world premiere at Arena in December 2019. The play, which won the 2020 Helen Hayes/MacArthur Award for Best New Play or Musical, was scheduled to open on Broadway this year, but—like everything else—it’s on hold.

“Casting for Broadway and the West End is very difficult right now,” Ludwig said. “The actors need to keep their options open. They can’t afford to be tied to a production without a date.”

Ironically, Dear Jack, Dear Louise will be relatively easy to mount once the shutdown begins to ease. “Since the two characters are never in the same place, it’s simple to practice social distancing on stage.”

Although the exchange of love letters is literally the heart of the play, Ludwig did not intend, at first, to tell the story that way. “Originally, the courtship was going to take place on an Army base. But that didn’t work,” he said.

It was not until 2017 and the death of playwright and colleague A.R. Gurney, whose Love Letters had long inspired him, that Ludwig thought of using the same device.

The letters are fictitious. Although his mother spoke of them often, she destroyed the originals, saying they were “much too personal” for Ken and his brother to read.

The idea for the Love Letter Experience began with a phone call from Arena Artistic Director Molly Smith, who suggested sending the letters to a few of the theater’s supporters. At her suggestion, Ludwig then talked to Teresa Sapien, the theater’s casting director, who came up with the concept of recreating the drama as a serial love story, meant for mailing to subscribers.

The story will unfold in the form of nine packets, each hand-addressed, consisting of a single letter—his typed on a vintage manual on onion-skin paper, hers penned in flowery cursive on  note cards—plus memorabilia, such as ticket stubs and tiny black-and-white photos. (The letters are the work of Jenn Sheetz and Lance Pennington in Arena’s props department.)

People who order the Love Letter Experience—regardless of whether it’s for Valentine’s Day, an anniversary, or a simple self-indulgent treat—will receive the packages over a six week period, beginning in mid-March. 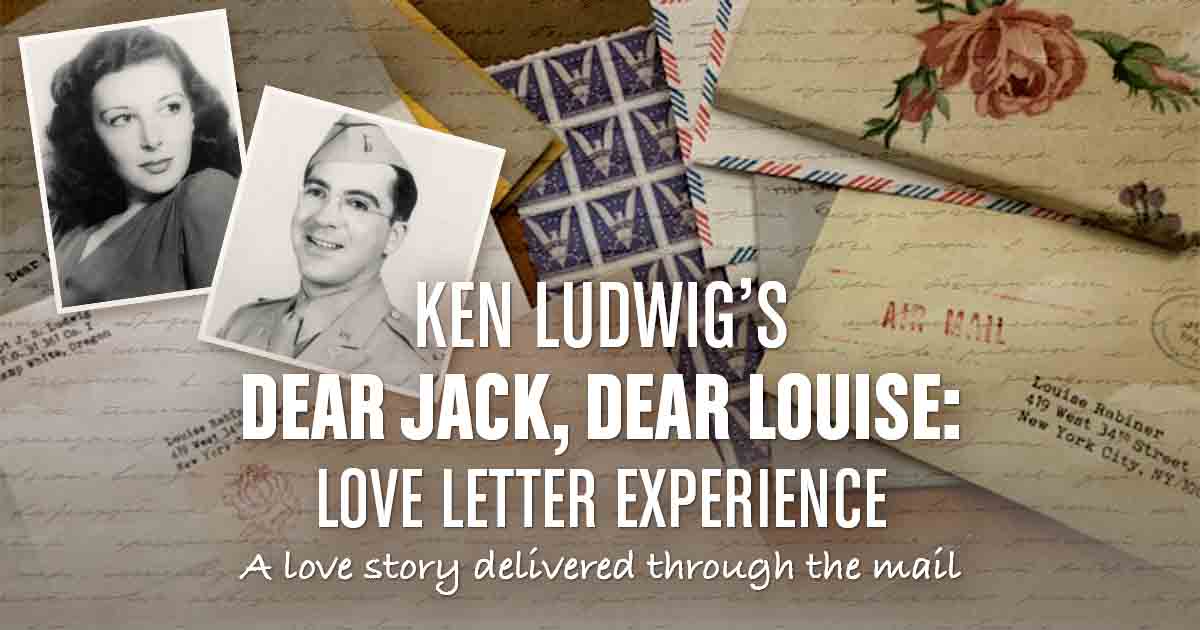 Ken Ludwig’s Dear Jack, Dear Louise: Love Letter Experience is available to purchase from Arena Stage now. To order the series, which will be mailed beginning in mid-March 2021 and continue for a limited time, call the sales office at 202-488-3300 or click here.