Amidst the ongoing pandemic shutdown of live performance venues, Off-Off-Broadway’s Dirty Laundry Theatre adapted emerging Israeli playwright Nimrod Danishman’s original stage play Borders, which the company premiered in the New York Summer Theatre Festival in 2019 (garnering a Best Play nomination), for a virtual production in 2020. Specifically designed for the digital screen and streamed live in real time from the actors’ homes, the online version is now being remounted as part of The Tank’s CyberTank initiative, in association with the Lesbian, Gay, Bisexual & Transgender Community Center (The Center).

The two-hander features Eli Schoenfeld as Boaz (an Israeli living in Jerusalem) and Adrian Rifat as George (in Beirut, Lebanon), who meet on the gay dating app Grindr. Despite their attraction to one another, they realize that any chance for an in-person meeting would be difficult, because of the animosity between their respective homelands and attitudes towards their sexual identity. Directed by Michael R. Piazza, the intimate story follows the pair’s developing virtual relationship and their exploration of those eponymous borders that threaten to keep them apart in the real world – a message that has increased resonance now, during our time of isolation from each other as a result of COVID-19.

The engrossing narrative is presented in the format of a series of Grindr chats on the characters’ cell phones, displayed in the center of the screen with the texts and photos they send one another. The actors appear in close-up split-screen images, one on each side, expressively voicing the messages they write (realistically including their texted misspellings and edits!), moving in and out of frame around their individual spaces (which we see in the background), and affectingly inhabiting the personalities and emotions of their believable characters with spot-on naturalism and immediacy.

What begins with the hope for a quick hook-up, and the exchange of graphic language and body shots, develops into intimate personal revelations about their past, their dreams, desires, and insecurities, and discussions about serious and sensitive socio-political issues, as they forge a true connection online. But will their growing bond be solely limited to digital communications, without so much as a phone call between them, or will they be willing to risk seeing each other, despite the dangers of the volatile situation between their warring countries? Or is there something more intangible that could prevent them from being together?

The riveting performances are enhanced by a compelling sound and video design by Piazza, and costumes by Avigail Bryger, with Ron Orlovsky providing his expertise as a stream technician. Borders is a consistently top-notch virtual experience for viewers that perfectly evokes the virtual experiences of its very human protagonists. 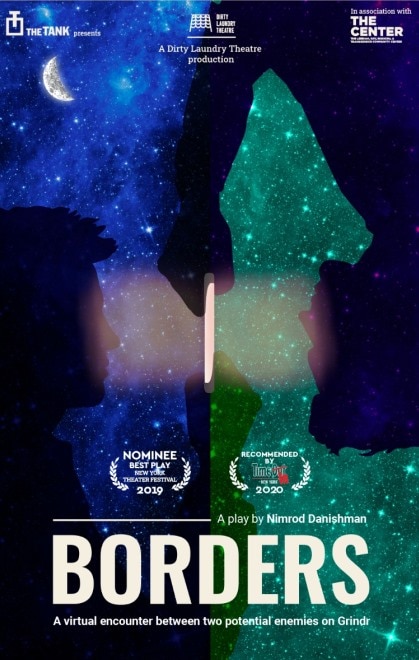 Borders by Dirty Laundry Theatre will stream live through 3 pm, Saturday, February 27, 2021, on CyberTank’s YouTube channel and will be available for viewing February 28-March 13, on CyberTank’s pay-per-view OnDemand platform. For tickets, go online. For a preview of the show, you can watch the trailer here: