“Sharing art right now is so important. People are craving connection, art, theater, and music. This show gives them a little bit of that in these trying times,” Erin Gardiner, told me in a pre-performance interview. Gardiner—assistant professor, Musical Theater, George Mason University School of Theater—directs the Zoom production. 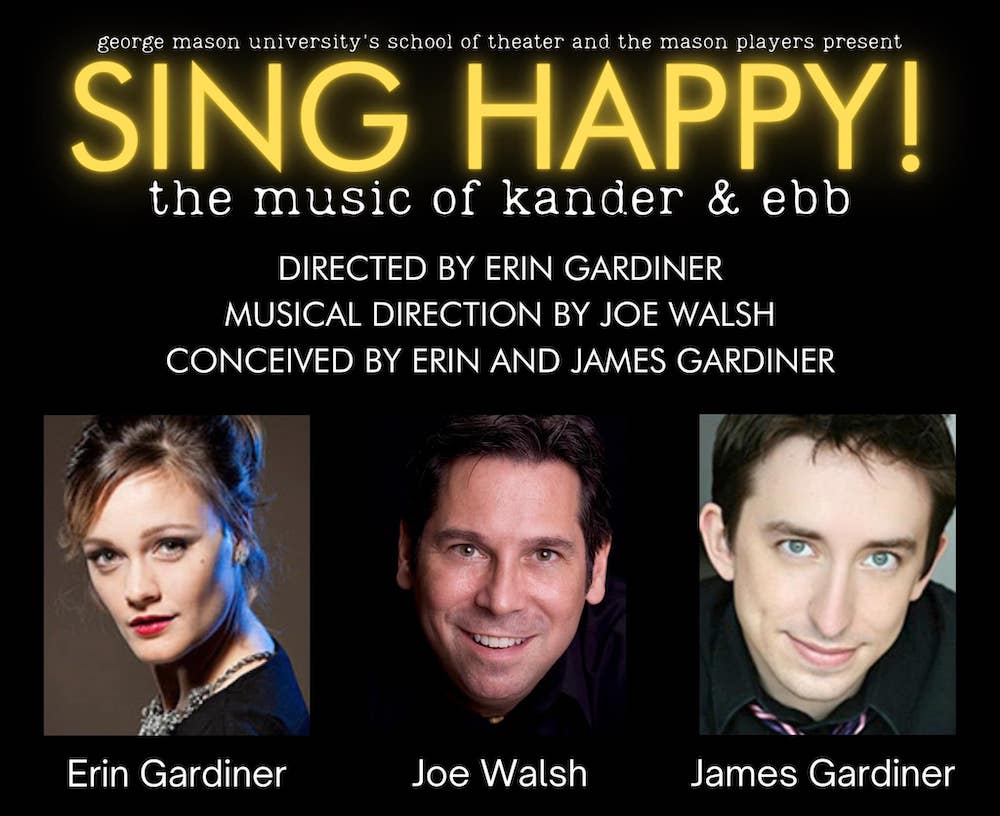 Now, don’t let their student status get in your way of viewing this musical performed by a bevy of more than two dozen able singers and musicians, likely new to your ears and eyes. As Gardiner explained, “The Mason Cabaret is an audition-based group of talented students who act as ambassadors for the Mason School of Theater and our musical theater program.”

Sing Happy! The Music of Kander & Ebb was conceived by Erin Gardiner with James Gardiner, her husband and fellow GMU College of Visual and Performing Arts faculty member. The production is an opportunity not only to showcase student talent but to enjoy selections from the vast Kander and Ebb son book from more than 15 musicals they created. These include the Broadway megahits Cabaret (1966) and Chicago (1975) and the less often revived Flora the Red Menace (1965), The Happy Time (1968), The Rink (1984), The Act (1978), and Steel Pier (1997).

As Erin Gardiner noted, “When it comes to impact and sheer amount of well-known material, Kander and Ebb are musical theater legends.”

Songs for Sing Happy! include more than a dozen numbers sung by charming, skilled voices in solos, duets, and full-company chorus. While there is no book, Sing Happy! feels more than just a stand-and-deliver collection. And the Zoom production is more than simple static squares and rectangles with framed faces. There is well-choreographed energy within the frames and fluidity between the frames thanks to agile post-production work.

Sing Happy! has an interesting arc from its wide-eyed opening number, Steel Pier’s “First You Dream,” to the cutely comic “Arthur in the Afternoon” from The Act. Then it is on to the sweetly sincere longing for happiness of a trio of songs including Cabaret’s “Maybe This Time” before the awakening fire of Chicago’s “Cell Block Tango” performed with a twist. Gritty songs follow such as Kiss of Spiderwoman’s “Only in the Movies” along with the spark of “Ring Them Bells” from Liza with a Z. As the production continues to roll along, it finds a terrific a finale: a full-company, amped-up anthem with a well-designed and executived “New York, New York.” (See full song list below.) 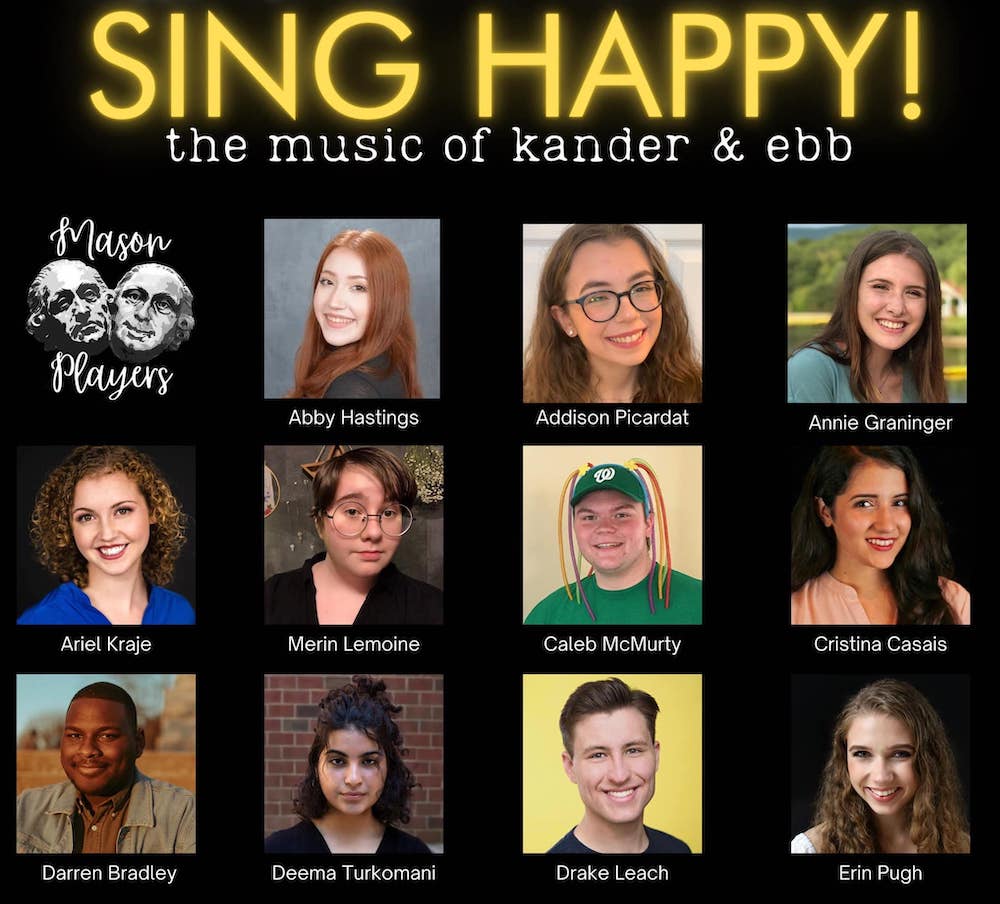 The production was developed and produced at a distance. The performers filmed in their own homes; the musicians played in their own homes. That is no insignificant feat, since then a myriad of individual films required post-production and editing to seamlessly stitch them together. The students decided to forego their between-semesters winter break so that they could fully engage themselves in the production with safety and health paramount given the on-going pandemic.

I would be remiss not to vigorously applaud the talents of the student production team. Their post-production work made the production of Sing Happy! smoothly pop one moment and be moody the next. An example is the “New York, New York” number. Think of about 20 student vocal tracks melded with half a dozen or so instrumental tracks edited into a snazzy energy-filled virtual production with an untold number of moving face- and body-filled Zoom boxes of various sizes and shapes bringing visual joy. Production staff: Stage Manager Addison Picardat, Choreographer Ariel Kraje, Assistant Choreographer Cristina Casais, Lighting Coordinators Caleb McMurtry and Merin Lemoine, Editing Billy Kessinger, Reid May, James Gardiner, and Ariel Kraje, MAAH Producer Haley Smyser, Production Manager Ruth Yamamoto.

In my pre-performance interview with Erin Gardiner, she shared this: “When COVID hit and Mason was forced to cancel its production of Spring Awakening, John Kander agreed to do a virtual master class with the cast and crew. So with this tie to Mason, Kander and Ebb music was a perfect fit. These two composers do not shy away from heavy subject matter. Because of their impact on musical theater, there are already two Kander and Ebb reviews that have gorgeous arrangements. We were able to use an arrangement from World Goes Round and First You Dream with a mix of other Kander and Ebb songs. This piece is completely picked to show off the strengths of our talented students.” 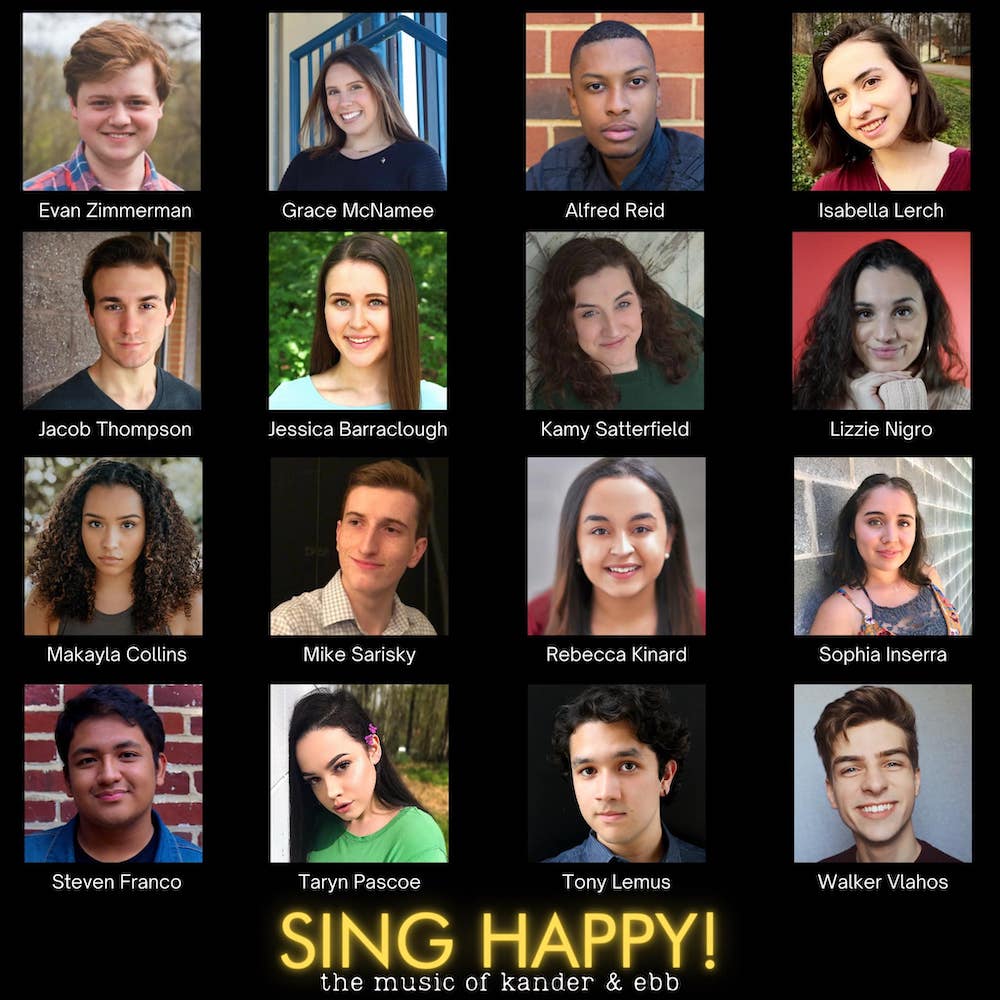 Sing Happy! The Music of Kander & Ebb is a musical winner. It’s full of personality, sizzle, comic turns, and the vivid sorrow of ballads of dreams unrealized. And you never know: Someone you see and hear in this Mason Cabaret Zoom production may be before your eyes and ears one day soon on a DMV live stage.

Let me leave you with this lyric from “The Happy Time,” one of the Kander and Ebb songs in the revue:

This journey through time and space may strike you as odd, perhaps, and yet
I’m longing to see you smile, and hear you laugh—and remember you remembering the happy time.

Sing Happy! The Music of Kander & Ebb is available to watch free as part of Mason Arts at Home.

“First You Dream” from Steel Pier. Performed by the Company.

“We Can Make It/Maybe This Time/Isn’t This Better Trio” from The Rink/Cabaret/Funny Lady. Performed by Jessica Barraclough, Drake Leach, Makayla Collins.

“Only in the Movies/Happy Endings/At the Rialto” from Kiss of Spiderwoman/All About Us/New York, New York. Performed by Jessica Barraclough, Annie Graninger, Erin Pugh.