With its inaugural production of Jack Canfora’s Jericho (which made its debut Off-Broadway at 59E59 in 2013), New Normal Rep – a new streaming theater company created during the pandemic and dedicated to presenting new and lesser-known plays that are reflective, inclusive, and illuminating – examines the lingering emotional and psychological effects of the personal and collective trauma of 9/11 on one Long Island family. But amidst all of the tragedy, grief, conflict, and division there are also bits of sardonic humor and desperate hopes for resolution, as the characters work through their anger, guilt, and healing strategies to begin to move on with their lives.

It’s 2005, and the devastation of the terrorist attack on NYC is still very raw and immediate for those who experienced it first-hand. The story centers around Beth (half Irish, half Palestinian), whose husband Alec died that day in the World Trade Center. Josh, the brother of Ethan (the man she is dating), was there, too, but was somehow able to make his escape from the building. Both have residual survivor’s guilt and secrets that exacerbate their feelings.

Beth is unable to commit fully to her still unconsummated three-month relationship with Ethan, while having hallucinations and conversations with her late spouse (she envisions Dr. Kim, her woman therapist, as Alec). Josh, who has become increasingly devoted to his Jewish identity and heritage, is determined to move to Israel to be a part of his ancestral cultural community, despite his wife Jessica’s refusal to go with him or to accept his new-found zealotry. It all comes to a head at an awkward and explosive Thanksgiving dinner at the home of the brothers’ long-widowed mother Rachel, who, unaware of the drama in her sons’ lives, is planning to move to Florida, leaving her big suburban house to the soon-to-be-divorced Josh and Jess, so they have room to raise a family. Tensions mount, revelations fly, and the walls come tumbling down.

Directed by four-time Academy Award nominee Marsha Mason (The Goodbye Girl), the six-person cast masterfully relays the distinctive personalities and their backstories, while manifesting their divergent responses to the catastrophic events, their individual coping mechanisms, and their strained interactions. Eleanor Handley as Beth uses counseling, medication, and humor to combat her ongoing neuroses, sharing her thoughts with the imagined Alec – played with likeable insight and amusement by C.K. Allen – and, through first-person direct address, with the audience. As Ethan, Handley’s real-life husband Michael Satow is seemingly patient and easy-going, though he, too, has another side that his brother exposes.

Jason O’Connell and Carol Todd bring palpable animosity and pain to the battling Josh and Jess (whose justifiable outrage and drinking ignite the holiday fireworks), as they face the inevitable dissolution of their marriage. And Emmy-nominated Golden Globe and Obie Award winner Jill Eikenberry (Uncommon Women and Others; LA Law) makes the transition from stereotype (the guilt-inducing Jewish mother, who wants more contact with her sons, pushes for grandchildren, and relocates to Florida), affecting a New York accent that is absent from the speech of the younger generation, to the giver of sage advice based on her life-time of experience (having also survived WWII and the premature death of her husband). Will she and the others be able to heal their wounds, and to get on with their lives?

The now-ubiquitous Zoom-box format in which the show is presented (virtual technical direction by Adriana Gaviria) – with its changing background images to set the locales and a few germane props (e.g., the wine bottle that the stress-drinking Jess empties) – is most effective in Beth’s monologues, in which she leans forward and looks directly at the camera, creating a sense of intimacy with us and eliciting our sympathy. The scenes with multiple characters generally lack a convincing visual connection, even when the backdrops indicate that they’re in the same room (though the look of boxed-in isolation, whether or not intentional, seems apropos during their alienating confrontations and previously unshared and divisive revelations).

New Normal Rep’s Jericho is a thought-provoking and substantive examination of life-changing trauma and how to deal with its after-effects. And although Canfora’s narrative centers on 9/11, it is engaging theater that can help to bring us together through our present pandemic-time separation and anguish. 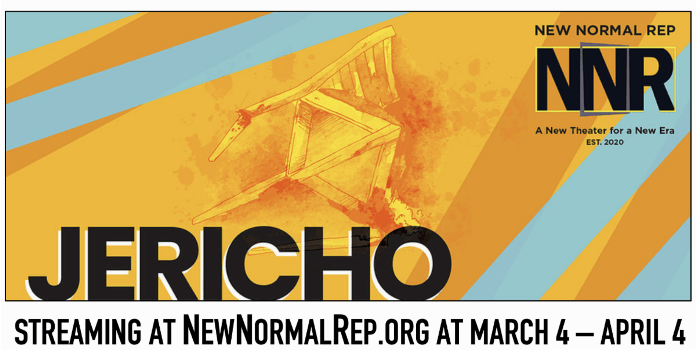 Jericho streams on demand, March 4-April 4, 2021, at www.NewNormalRep.org. For tickets, priced at $25 ($10 for students and theater professionals), go online. Along with the play, viewers can participate in The Speakeasy – an opening night Happy Hour Q&A with the cast and creative team, beginning at 9:30 pm; tickets are an additional $10. Four-play season subscriptions are also available for $100, and include free access to special programming, including The Speakeasy and live play readings.