As the pandemic has left live theater dark for the past year, we have been given an unexpected gift: the opportunity to take in virtual theatrical productions from companies we may not be familiar with or have been geographically distant from. Traveling virtually also allows theatergoers to take in the works of new generation of theatermakers, those perhaps overlooked in the “before” times.

Recently I took in a 10-minute play festival of original works written, produced, directed, acted, and crewed by students from the Bowie State University (BSU) School of Theatre. It was the BSU Theatre 8th Annual 10 Minute Play Festival: “By Students. For Students.” A virtual Zoom production totally crafted by the students using their own phones and home-based technology, it was a vitalizing experience. 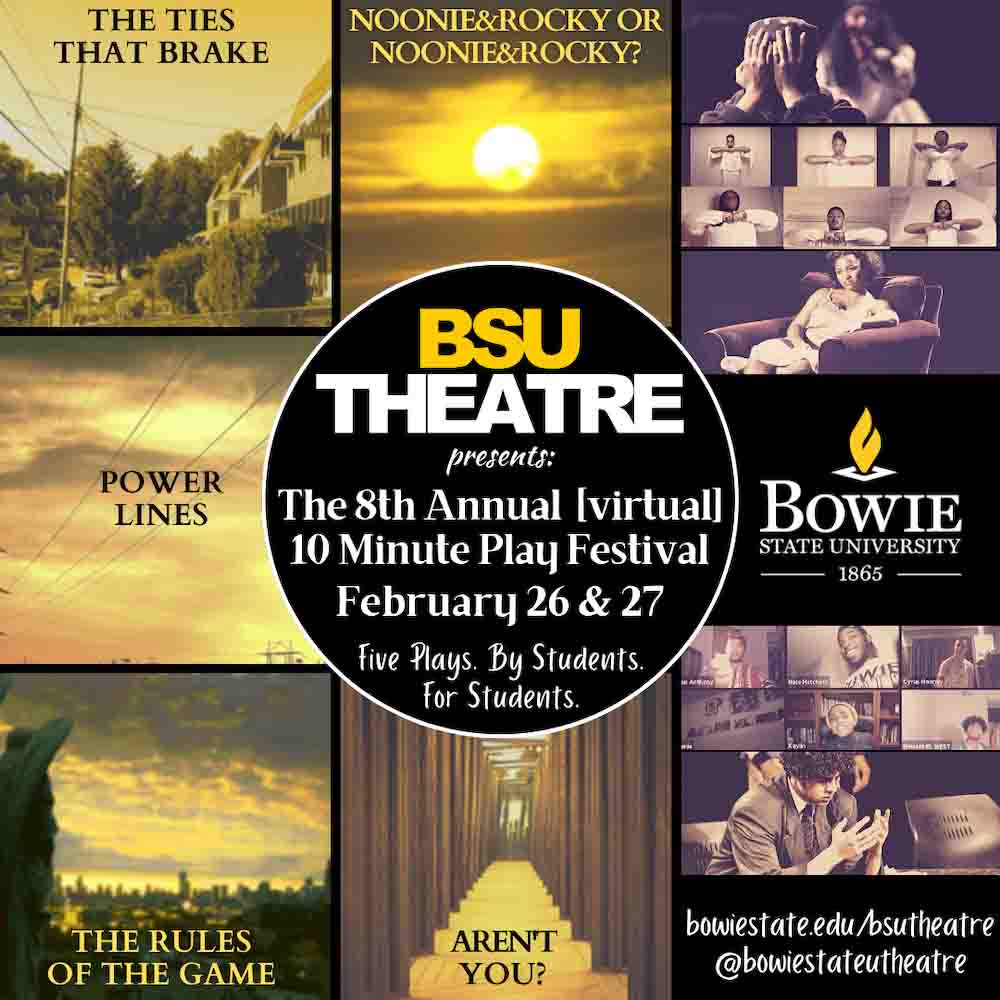 The festival featured five new plays, all written by BSU students under the age of 25: Powerline, The Ties That Brake, Noonie and Rocky, Rule of the Game, and Aren’t You. There was humor and anger, love and pain, personal determination and lightness, moving with jazz rhythms, or pop songs, or a mournful ballad. There was the delight of two young people finding their way into love. There were others with hard bracing stops, giving shivers about death in a world of white supremacy.

The challenging works they created had such piercing dialogue as:

You’re casket ready.
Stop playing before you end up on a T-shirt.
Call us by our right names.
Believe in something greater.

As well, there were the joyful words of two people sitting in the front seat of a virtual car chatting about the moon, the sun, love, and tacos.

Bowie State University is an HBCU (Historically Black College and University) located in Bowie, Maryland. Founded in 1865, Bowie State is the oldest HBCU in Maryland and one of the ten oldest in the country.

As I learned in a conversation with four members of the BSU Student Executive Producers group—newly created within the university theater program for the play festival—it was a positive reflection of how faculty worked to center Black student voices.

The students noted the stresses of not being in an in-person school environment over the past year due to COVID-19. As Nathanael Hatchett noted: “It has been disheartening to have my college experience transferred online, but my family and professors have helped us adjust really well. Our professors have reshaped the curriculum to be engaging as possible during these times, and by us the Executive Producers being included in the process of planning the program productions, we’ve produced productions that reflect the students’ needs and wants.”

Ryan Anthony added: “We thrive on physical interaction to create work and having to adjust to a virtual form was extremely tasking.”

Ryan Anthony: I enrolled in Bowie State out of necessity and understanding the chance I was given when I received a Band Scholarship. The caveat in joining an HBCU and being a theater artist is sadly a large majority of the HBCUs fail to supply their performing arts departments with the necessary tools to succeed in their field (i.e. financial assistance and a curriculum that requires staff of color to teach students of color).

After changing to a Theatre major, I at first wanted to strictly act. After participation in the 7th Annual 10 Minute Play Festival in 2020 as both a director and playwright, I then fell in love with the creator aspect, as opposed to the created aspect.

Nathanael Hatchett: I transferred to Bowie State in my junior year of college. Bowie State chose me, just as I chose them. I decided to enroll at Bowie State because I wanted my college experience to be filled with cultural teachings that represented the identities that I serve. A lot of times in HBCU programs we are underfunded, and specifically in the arts we have to fend for ourselves based on lack of support, so what makes our program special is that we have such a loving, supporting, and nurturing community within each other.

I first fell in love with theater in high school through my theater arts class when we learned about spoken word. We were tasked with memorizing and performing a poem of our choosing, so I chose “And 2morrow” by Tupac Shakur. This poem spoke life and love into me, and I knew in those moments that performance poetry and production was for me. Through performing arts I want to spread love where the hate is.

Cristen Young: My decision to enroll at Bowie was mainly locationally and monetarily based because I was living outside of the country at the time. However, I definitely do not regret my choice. HBCUs are amazing because they allow for those that may feel like a minority in everyday life to be surrounded with the fellowship of people that look like them. However, often arts departments, like Bowie State’s, have a hard time getting as much funding as other programs.

I had a moment several weeks ago when the lockdown in my area finally ended and I was allowed to continue dance classes. As I was standing there in class, my instructor hadn’t even begun to teach yet, but I looked in the mirror and got so giddy because I was standing in a studio about to dance. I realize now, THAT FEELING is why I pursue performance art. Looking back to my childhood, it feels as though I was simply lucky enough to grow up in what I consider to be the prime of dance movies and musicals in entertainment history so far.

Daniel Young: When I first started at Bowie State, I started as a Communications: Broadcast Journalism major with a minor in Theatre Arts. I was planning to see how it would work, since Broadcast Journalism is similar to the Theatre Arts major in some of the courses you take. But after my first theater class I knew I would miss out on so much as a minor and switched the next semester. Part of the reason I did was the community we have in the department. It truly felt like a family, and that was something I hadn’t felt in a school setting before. I’ve been in love with the department and my new family ever since.

I want to work in performing arts because I love telling stories and bringing people on a journey. I fell in love with the arts and storytelling when I was in The Uncut Coming of Christ, at the First Baptist Church of Glenarden. I’ve loved the feeling of bringing a story to life and sharing that life with others ever since.

Summing up the impact of these students’ lives in this moment, Elena Velasco, assistant professor in the BSU Department of Fine and Performing Arts, told me this: “Transformation is necessary in every aspect of theater, particularly to ensure representation and equity are centered as we all move forward. And with rising leaders such as BSU Theatre’s Executive Producers, that change will be felt throughout our field.”