During this year-plus away from live theater, many artists and creators took the opportunity to look deep into their processes and methodologies. The goal was not to get “back to normal,” per se, but to reevaluate the pervasive systemic exclusion of marginalized voices in the performing arts. While some theaters emerging from dormancy have seemingly learned nothing, and others if little else can write ambitiously overhauled mission statements, some theaters are stepping up with first-rate exemplars of exciting, intelligent, inclusive theater that can carry the art form forward.

In the near future, a debilitating disease known as The Syndrome has spread through the population, chiefly impacting poor African American women. Ten years ago, Paula Williams (Kyla Hammond) and her sister Nia underwent an experimental therapy offered by Dr Stallings and his graduate assistant Nichelle Vye (Valerie Lewis) that resulted in Nia’s death. Now Dr Vye has reached out to Paula again; she has been secretly pursuing research further on her own, and claims to have made a major breakthrough.

Paula is clearly traumatized by her sister’s death and mistrustful of Dr. Vye, but nonetheless finds herself drawn in, partially because she wants to stabilize her heath enough to start a family with her fiancé Brandon, but especially when preliminary therapy — which accesses the patient’s inner consciousness — not only bears fruitful results but suggests the possibility that Nia may actually still be alive, albeit on another plane of existence.

Science fiction has historically been a useful means to talk not about the future but about the present, couching contemporary social issues inside plots about aliens and mad scientists and such. McPhatter, an African American playwright, peppers the script with a lot of weighty concepts, some universal, others definitely intended to resonate with Black audiences. The notion of a white scientist (presuming Dr. Stalling was Caucasian) experimenting on Black subjects evokes the Tuskegee Experiment. There are also occasional references to the North Star, and at least one mention of “following the drinking gourd,” a folk song denoting fugitive slaves’ route to freedom using the North Star as a guide.

This is a fascinating piece of theater — written before the pandemic — with a gripping theme of spiritual transcendence, and Rapid Lemon’s production team is largely up to the task of realizing it effectively. Set Designer Bruce Kapplin, Lighting Designer Allan Sean Weekes, and Prop Artist Flynn Harne create a lab environment that’s simultaneously cold and clinical but still exploding with vibrant color. Moods are further heightened by Noah Silas’s projections and Max Garner’s sound design.

I presume it’s a limitation of budget that what is described as a “chamber” in which the patient sits for their therapy is realized onstage as an exam chair on a low platform, and that the encounters in the “healing place” aren’t able to be further distinguished on stage from the action in the “real” world. It also may be that this distinctiveness was very much there and I wasn’t able to fully perceive it through my Zoom feed watching a single camera perspective, so I can’t fault Director Noah Silas. Regardless of any challenges, he keeps the action brisk, even if from my remote view the staging tends to keep some of McPhatter’s futuristic magical realism grounded in the here and now.

I also had some challenges between my hearing and the occasionally spotty audio feed. Consequently, I lost some dialogue and a lot of nuance between the actors, further compounded by their masks, so any appraisal of the acting company has to bear that in mind. Valerie Lewis and Kyla Hammond are nonetheless well-matched leads, Maria Marsalis is effectively ethereal as Nia, and Max Johnson lets Brandon cross the line, as the only male and only white character, into possessiveness and entitlement.

Many theaters locally and nationally should take note both of McPhatter’s fascinating play and of Rapid Lemon’s mission statement. If any producer or audience member might secretly (or not so secretly) be put off by greater diversity and representation onstage, citing coded terms like “marketable” or “accessible,” and clutching a dated conception of “Black” theater, it’s their loss. Serious Adverse Effects is a North Star to follow. 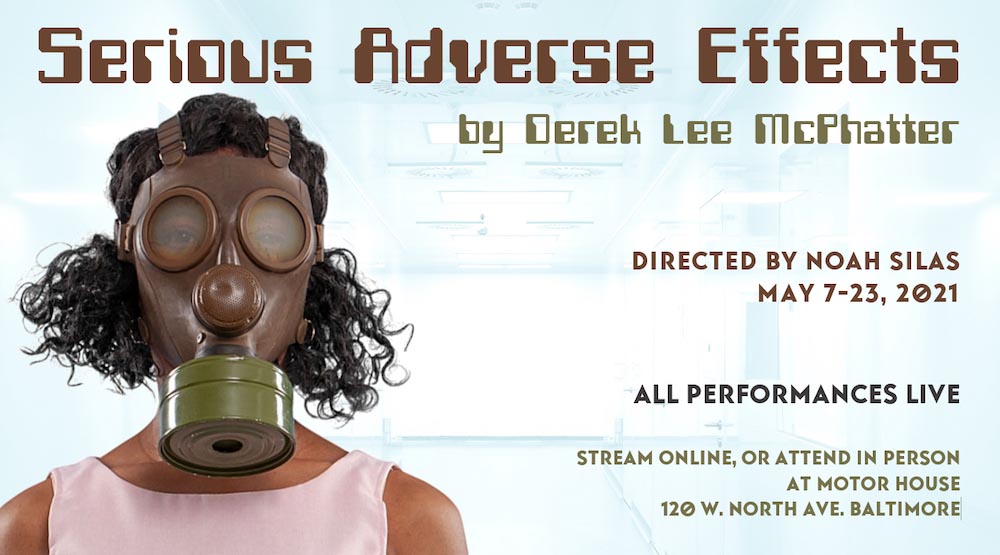 Serious Adverse Effects by Derek Lee McPhatter, directed by Noah Silas, presented by Rapid Lemon productions, plays through May 23, 2021, at Motor House, 120 W. North Avenue, Baltimore, MD. All performances will be live, and available both online and in person. Tickets for both can be purchased online.