Though the coronavirus pandemic has temporarily halted public access to live in-person shows at Joe’s Pub, the popular Astor Place venue has continued to entertain audiences with a free series of online performances from its iconic stage on Joe’s Pub Live! Next up is the premiere of Migguel Anggelo: A First Look at English with an Accent (EWAA), streaming on Thursday, May 13, at 8 pm.

Presented in conjunction with Greenwich House Music School as part of its Uncharted music series, this week’s peek at the development of the Brooklyn-based Venezuelan-born Anggelo’s multi-disciplinary work-in-progress, created with longtime music director and collaborator Jaime Lozano, features three fully-produced first-cut videos from a forthcoming series of short films. The stream will also contain a number of final drafts of songs composed during Anggelo’s time as a 2020-21 Resident Artist with the NY Presenters Consortium (following his 2019 residency with the Joe’s Pub Working Group), for an engaging look at the music and visuals, and the artistic ingenuity devoted to building EWAA thus far. Ultimately, the ambitious project will be expanded to include a live dance/theater performance and a new music album.

The original musical story is told from the perspective of a newly emigrated caterpillar that has come to NYC to find his wings, in an insightful exploration of the American Dream and the themes of freedom, safety, and self-worth, through the artist’s signature intersection of queer, Latino, and immigration identities. As he struggles with which direction his life is taking, he begins to question if he’s really a caterpillar at all (or just a lowly worm), if he’ll become the butterfly of his dreams, and what it even means to become a butterfly?

Lozano told me that “Migguel pushes the boundaries. He has such a fearless open mind, so the creation process is always an exciting journey. Whether we are in the recording studio or on stage, I’m excited to partner with Migguel so we can expand the soundscape and make instrumental innovation. I want to allow Migguel’s movement to be equally as expressive and as symbolic as the lyrics he sings.” He went on to say that, “Migguel is such a special artist to work with. You know, we are two Latin American immigrant artists in New York City. We have a shared journey that makes collaborating meaningful.”

In addition to getting a virtual preview of the project, audiences are also invited to give their feedback in a live online chat with the artists, Joe’s Pub, Greenwich House Music School, and other viewers during the premiere presentation on YouTube. 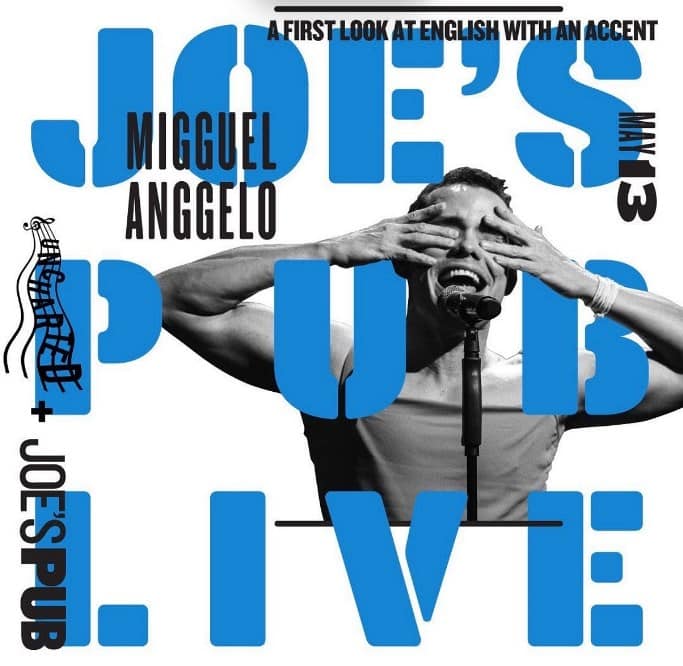 Migguel Anggelo: A First Look at English with an Accent streams on Thursday, May 13, at 8 pm, on the Joe’s Pub YouTube channel and The Public Theater website, and will remain available on demand 24/7, through Sunday, May 16. To register for the free event, go online.