With the wealth of livestream offerings that have kept audiences entertained and connected to the theater throughout the pandemic, it’s not always possible to fit everything you’d like to see into your schedule. But some shows are returning by popular demand for additional dates, and some series are ready for binging, now that all episodes of the season have been broadcast and remain online. Among those with extended availability are hits from Keen Company and the Broadway Podcast Network. 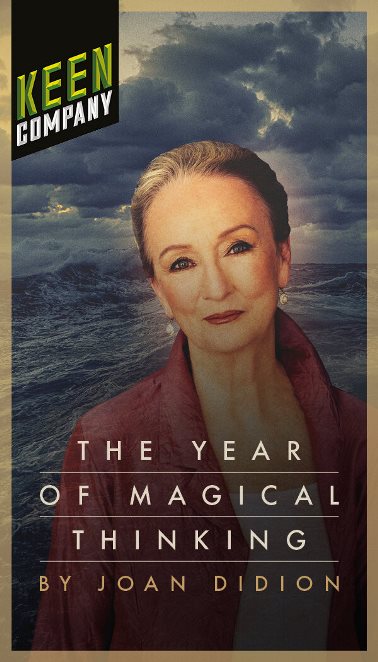 To support Keen Company and its programming (Hear/Now audio theater season, Keen’s Playwrights Lab, and Keen Teens), an on-demand video revival of the original livestream of The Year of Magical Thinking, which first aired on March 13, is available again today (Thursday May 13, at 9 am) through midnight on Sunday, May 16. Adapted from Joan Didion’s best-selling memoir and directed for Keen by Jonathan Silverstein, the moving work gives a personal account of loss, grief, and resilience in a year of devastating familial tragedy.

Tickets for the virtual fundraiser, which runs approximately two hours, are priced at $25, and include a personal opening message and access to a pre-recorded talkback with Obie and Drama Desk Award winner Kathleen Chalfant, who stars in the one-woman tour-de-force presentation. Upon purchase, patrons will be emailed a private web link and password with their confirmation; closed captioning is available for both the performance and talkback.

As the Curtain Rises – Broadway Podcast Network’s hilarious insider parody of what goes on behind the scenes when taking a new musical from page to stage – just aired the final episode of its all-star premiere season on Thursday, May 6. Opening-night of the embattled fictitious show AVVATAR finally arrived and it was filled with all of the side-splitting tension and drama fans have come to expect from the original digital soap opera.

All twelve installments, plus additional bonus content, are now available on the Broadway Podcast Network website, the BPN app, and wherever you listen to your favorite podcasts. You can binge-listen again and again, till the curtain rises on season two, which can’t come soon enough for me!

Also from Broadway Podcast Network, Bleeding Love – the first musical-theater podcast to be recorded and released during quarantine – celebrated its one-year anniversary in March, with more than 20,000 downloads and counting. The compelling post-apocalyptic tale, with book and story by Jason Schafer, music by Arthur Lafrentz Bacon, and lyrics by Harris Doran, is set in a dark world where it’s too dangerous to venture outside. But a starry-eyed teenage cellist risks leaving her apartment to win the love of the rebel punk next door, offering a timely message of hope that one small person can change the world and overcome the darkness.

Featuring the stellar cast of Sarah Stiles, Tony Vincent, Taylor Trensch, Annie Golden, Rebecca Naomi Jones, and Marc Kudisch, the free podcast remains online in its entirety, along with the full album and a selection of songs from the futuristic musical, so you can listen at your convenience, or revisit it as often as you like, on the Broadway Podcast Network and other popular streaming sites.