Washington Stage Guild continues its run of online performances with a one-act comedy from George Bernard Shaw, whose works they perform so frequently that he’s affectionately known as their “house playwright.” How He Lied to Her Husband might in fact be taken as a double dose of Shaw, since it parodies, and occasionally mentions, Shaw’s own earlier hit play Candida. (In a clever touch, this production opens and closes with snippets of Leonard Bernstein’s Candide overture—different story, but similar name!)

The central situation is simple to the point of being simplistic: Aurora (Julie-Ann Elliott) has lost the poems written to her by young lover, Henry (Jordan Brown), and is afraid her husband, Teddy (Lawrence Redmond), will see them.* But from this well-worn trope, Shaw spins a delightfully sardonic comedy of love and marriage.

Pre-filmed and streaming on YouTube, this production deals admirably with the challenges of the format, under the skillful guidance of Director Morgan Duncan and Production Manager/Stage Manager Elaine Randolph, with the aid of Video Editor Lauren Hyland. The actors appear in different Zoom windows, each of them against an ornate drawing room background complete with chandelier, marble fireplace, and historic portraits (an image taken from Highclere Castle, where much of Downton Abbey was filmed). We unfortunately can’t see their costumes in full, but what we do see—formal dress for Aurora and Henry, suit and tie for Teddy—goes nicely with the grand setting, especially Henry’s natty tuxedo with striped lapels.

Since they can’t actually be followed under the circumstances, Shaw’s rather detailed stage directions are read aloud as narration. The need to act these out solely with the upper body, plus a lack of props to act with, requires a great deal of facial and vocal expressiveness and a bit of pantomime from the cast. All three are more than up to the task. Elliott seamlessly maneuvers between daring romantic heroine and prudent society lady with a terror of tarnishing her reputation. Redmond ably backs her up as the husband who’s a little more understanding than anyone bargained for, while Brown humorously conveys the young Henry’s disgruntlement at discovering the unexpected power of domestic ties.

The actors deftly handle the wit and nuance of Shaw’s dialogue while keeping up the brisk pace that it demands. Although the forced immobility does away with what would otherwise be some amusing stage action, it’s difficult to imagine that the dialogue, or other aspects of the acting, could be handled any better in a live theater. Available to watch any time between now and Sunday night, How He Lied to Her Husband offers a highly entertaining theatrical experience in miniature.

*Following Shaw’s original practice, the three characters are listed in the theater’s press release as Herself, Her Lover, and Her Husband, but they address each other by name in the play.

How He Lied to Her Husband streams for free until 8 p.m. Sunday, May 23, on Washington Stage Guild’s YouTube channel. 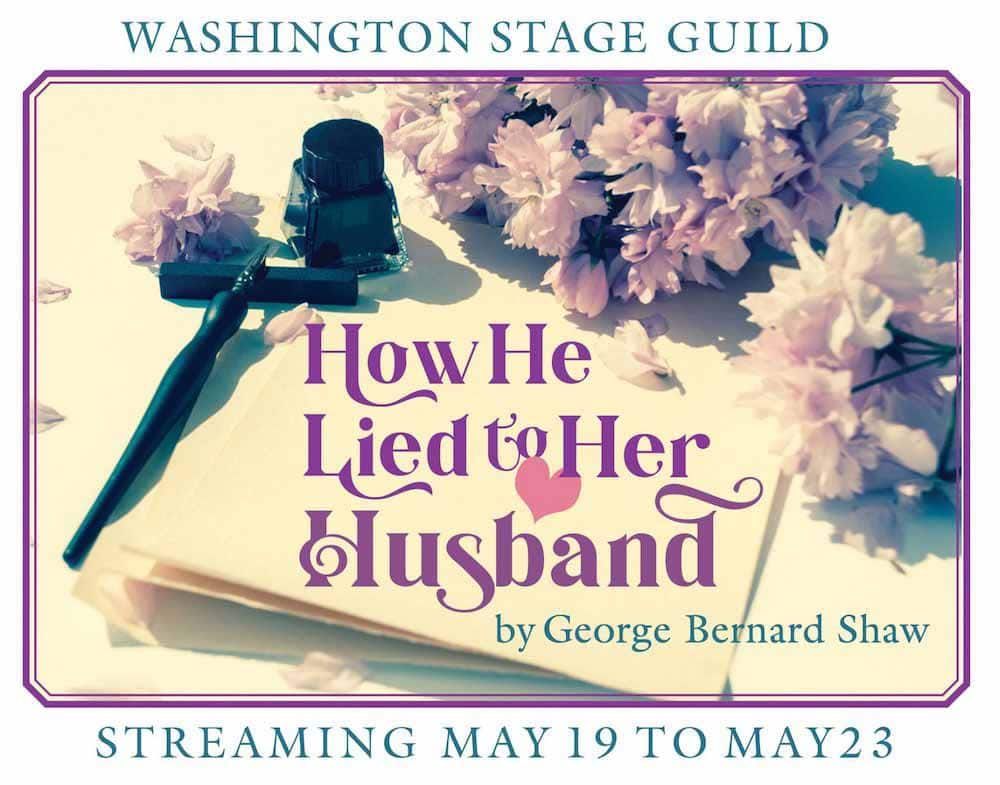