There’s nothing nice about The Niceties – it’s angry, combative, and explosive, and far from the eponymous suggestion of politeness in social behavior and etiquette. Originally presented as part of Manhattan Theatre Club’s Ted Snowdon Reading Series in 2017, the play made its fully-staged rolling world premiere in the 2018-19 season of MTC in New York, The Huntington in Boston, and McCarter Theatre Center in Princeton. Now a new digital production is being streamed by MTC in association with The Huntington, adapted by playwright Eleanor Burgess specifically for the pandemic-time virtual stage. But, sadly, its message of the ongoing racial inequity, divisiveness, and hostility throughout American history needs no current reimagining; it has become even more immediate and timely in light of the turbulent socio-political events, and calls for radical reform, of the past year (and the first anniversary of the death of George Floyd on Tuesday).

Directed by Kimberly Senior, the provocative two-hander is set in 2016, during the last year of the Obama administration and the presidential campaign for the upcoming election. An esteemed professor (Janine, a white woman of the Baby Boomer generation) and an inspired undergrad (Zoe, a Black female Millennial) from a prestigious Ivy-League university are meeting via Skype to review the student’s paper on the American Revolution. What begins with instructional/editorial comments about grammar, the need for proofreading, and stylistic flair quickly morphs from suggestions about writing skills (the niceties of accuracy, precision, and fine detail) to a ferocious hard-hitting debate on history, methodology, curriculum, democracy, and oppression from their divergent perspectives of race, age, and sexual identity.

Though both are passionately pro-Obama and anti-Trump, stand firmly on the liberal/Democratic voting side of the broader political spectrum, and share the privilege of an affiliation with a top-ranking institution, their conversation is not like-minded, but becomes increasingly heated – less of a dialogue than two adamant diatribes, with neither one truly listening, showing any understanding, or feeling any empathy towards the expressed observations, experiences, or beliefs of the other (the theme of student/professor antipathy recalls David Mamet’s Oleanna, though with racism, not sexual harassment, at its core). Discussion is replaced by disagreement, provocation, insults, and threats, each convinced that she alone is right, and each making valid points in Burgess’s highly articulate and mostly equally-weighted script (until it isn’t).

Played by the original cast of Lisa Banes as Janine and Jordan Boatman as Zoe, the hard-hitting characterizations of the antagonists are impeccably delivered and the commitment to their divergent viewpoints is fully believable. Banes is the epitome of pride and condescension in her expertise, accomplishments, and credentials, maintaining a refined and mature tone while interspersing jabs with compliments (until she doesn’t). Boatman’s Zoe exudes a reckless youthful spirit of activism and impatience, demanding immediate revolutionary reform in school and society that would overthrow the orthodoxy of traditional research, documentation, and “bullshit credentialism” in favor of revisionism, inclusivity, and a reliance on digital media to ignite support and affirmation (until it doesn’t).

Many significant intellectual and practical questions arise in the drama. What constitutes bold creative thinking and what are merely unproven assertions? Are personal feelings taking the place of evidence? Do critical comments represent educating or belittling? Are the demands for change seeking improvement or punishment? Are they a call for justice or revenge? Is compromise more effective than divisionism? Is rude confrontation bereft of empathy? Is language that appeals to people and persuades them necessary to attain a majority? And isn’t a majority how democracy works?

Most importantly, the play ponders if the fallout they both face on a personal, professional, and public level helps their cause or further widens the great divide of our country (including the viewers, who are likely to take the side of the character with whom they most identify). The implications are profound and will make you consider the best options for making progress, correcting injustice, and unifying our population as “one nation . . . indivisible, with liberty and justice for all” – or if that’s even a possibility.

Running Time: Approximately one hour and 50 minutes, including an intermission. 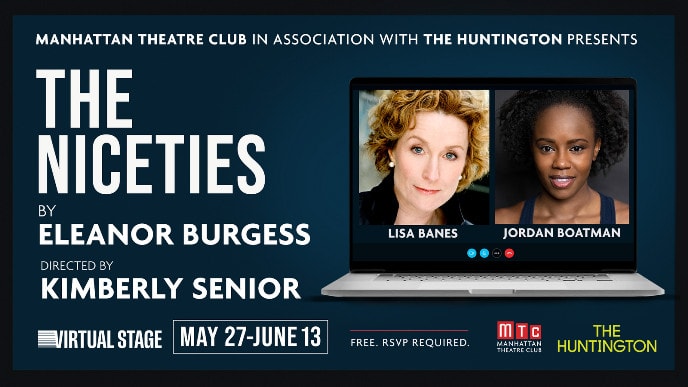 The Niceties streams on demand from Thursday, May 27-Sunday, June 13, 2021, with Manhattan Theatre Club. Tickets are free, but reservations are required. To RSVP, go online.