Growing up in Baltimore, it was impossible to avoid the story of Edgar Allan Poe (1809–1849). He was conceivably our most famous resident. There was the mysterious stranger, known as the “Poe Toaster,” who, dressed in black, would visit Poe’s cenotaph every year on the poet’s birthday. The Poe Toaster was known to pour himself a cognac and toast the legendary author, then considerately leave three roses and the rest of the bottle. There was the indelible image of the writer himself, 40, delirious, wandering the streets, to die in the hospital four days later, his cause of death unexplained even now. And there was his status as America’s first truly international writer.

Poe, a master of horror and suspense, is considered the inventor of the modern detective story, and an early practitioner of science fiction. He was respected in his day as a poet, critic, editor, and short story writer. His work was translated by Baudelaire and influenced the French Symbolists and the Surrealists, as well as Arthur Conan Doyle, creator of Sherlock Holmes.

Poe Theatre on the Air, a monthly radio drama series featuring Poe’s finest writing, is distributed through Baltimore’s NPR affiliate WYPR and sponsored by Baltimore’s own RavenBeer. The podcast is also also on NPR.org, Amazon, and Audible and is available any time of the day or, in classic Poe fashion, any time of night.

Fans of the series American Horror Story (Netflix, Hulu) Castle Rock (Hulu), Lovecraft Country (HBO Max), and Stranger Things (Netflix) will be sure to enjoy Poe Theatre on the Air. If you liked the films The Birds (1963), The Shining (1980), Get Out (2017), A Quiet Place (2018), or A Quiet Place Part II (2020), you will also find a treat in store. Poe lovers especially will be delighted with the quality of the adaptation, acting, music, and sound effects. 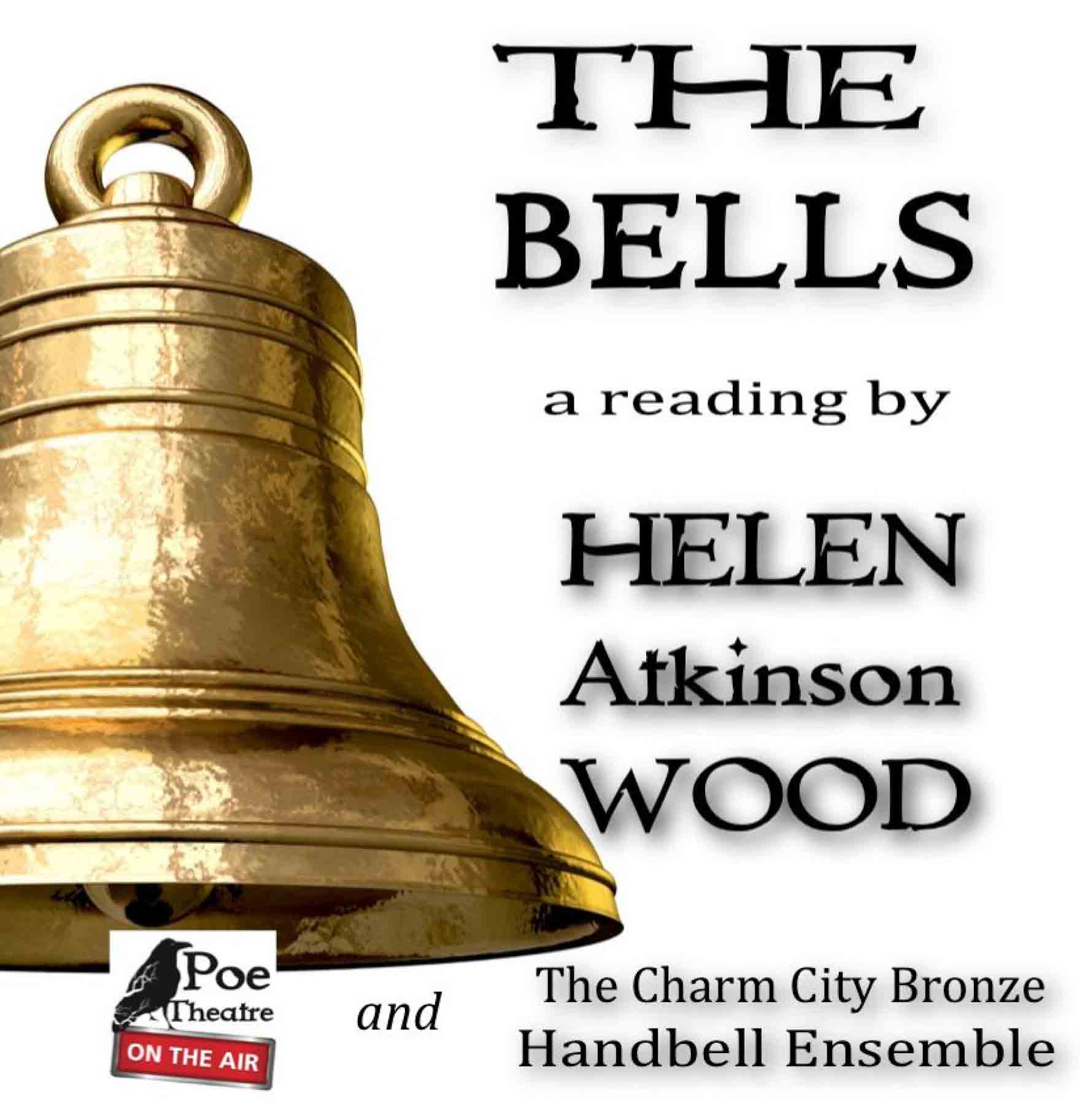 The latest episode, released May 19, 2021, is a reading of Poe’s onomatopoetic poem “The Bells” by noted British actress Helen Atkinson Wood (Blackadder) featuring a performance by the Charm City Bronze Handbell Ensemble. The poem, written in 1848, describes the many kinds of bells we all hear throughout our lives, some joyful, some frightening, and some heartbreaking.

The performance begins with the Charm City Bronze Handbell Ensemble’s arrangement of Erik Satie’s Gymnopédie Number 1. It features the haunting sound of bells ringing then being submerged in bowls filled with water, creating a “bending” of the pitch. Next, the poem itself, with special attention to each emotional detail. Poe biographer Arthur Hobson Quinn states that at the time Poe was annoyed by the bells of a nearby church. A friend suggested he write about it, giving him a piece of paper with the words “The Bells, by E. A. Poe,” adding “The little silver bells.” It is said that the poem was rewritten at least three times.

My connection to Poe is in way personal. My father, like Poe, was a writer who struggled with drink and depression. At his most inebriated, he was prone to reciting “the tintinnabulation… [of] the bells, bells, bells” or, paraphrasing, “this is the tomb of the last Ulalume.” I thought of it during rainy evenings in North Carolina as we jokingly called the rain itself “Ulalume.” Had my father not met his second wife, he might well have ended up like Poe, roaming the streets of Baltimore, uttering insanities, in someone else’s clothes.

Poe was profoundly unfortunate. His parents, both actors, died young. Although he was adopted by a successful merchant, their relationship was fraught with tension, and he struggled with poverty his entire life. Like many heavy drinkers, his was a dual personality. But there is no denying his genius. In one of the numerous and painful ironies that punctuate Poe’s life, a worn and stained first edition of his Tamerlane and Other Poems sold at Christie’s in 2009 for $662,500, a new record for a work of American literature.

Poe’s character was demonized after his death by one Rufus W. Griswold, a rival of his, whose obituary began with the appalling statement, “This announcement will startle many, but few will be grieved by it.” This was the equivalent of an epitaph for Mozart written by Salieri. Poe had many defenders, but Griswold also wrote an influential, and inaccurate, biographical sketch of the poet, which was widely distributed. Surely this was unfair and put in people’s minds the notion that he was a drug addict, a madman, and utterly unscrupulous.

I should note, however, the disturbing fact that Poe married his 13-year-old cousin, Virginia, when he was 27. Many witnesses attest to their mutual devotion. Some maintain that they lived together as brother and sister. I cannot comment one way or the other. Some believe you cannot separate the artist from the art. Some believe you can.

I, for one, would not watch Triumph of the Will or The Birth of a Nation or anything written or directed by Woody Allen.  Each must make his or her own decision. Every situation is different. In the case of Poe’s work, I believe it would be a shame to miss it because of the sins of an author long dead. Others may feel differently.

Poe Theatre on the Air has a clever framing device drawn from one of Poe’s stories, “The System of Doctor Tarr and Professor Fether.” We are in an insane asylum where every room is occupied by a protagonist of one of Poe’s works. Each tells their story, while hoping for a cure from our host, Dr. Maillard.

Some of Poe’s best stories are here: “The Tell-Tale Heart,” “The Black Cat,” and of course “The Fall of the House of Usher.” The spirit of Poe is everywhere and none of his more bizarre notions are coarsened or used for cheap theatrics. Better still, the stories are modernized somewhat, making them more accessible to the listener. Best of all, as you listen with headphones you are provided with a many-splendored experience that will make you forget all about the pandemic, our national polarization, and anything else that might be shadowing your days.

Zavistovich, also known as co-founder of the Molotov Theatre, plays many of the roles and offers a fearsome and humorous perspective on Poe’s world. Scripts are created by Zavistovich and Richard J. Hand, a professor at the University of East Anglia in Norwich, England.

The National Edgar Allan Poe Theatre hopes to provide theater productions to enhance tourism for the City of Baltimore, radio drama webcasts and broadcasts, and readings, lectures, and educational programs related to the works of Edgar Allan Poe. They are making a significant contribution to the culture of the city. And to quote Zavistovich (quoting Poe), “All that we see or seem is but a dream within a dream.”

Listen to “The Bells”: