Three significant events are streaming this week from NYC, highlighting the contributions of Latino, Asian American, national, and international artists in the contemporary world of dance.

Founded by National Medal of Arts recipient Tina Ramírez in 1970, as a performance, education, and advocacy platform for historically omitted and overlooked Black and Brown Latinx artists, Ballet Hispánico, the nation’s leading Latino dance organization, will present a virtual showing of the 2021 Instituto Coreográfico on Thursday, June 10, at 6 pm.

The evening will feature a work-in-process by dancer, choreographer, and educator Marielis Garcia, currently an Artist-in-Residence at the University of Maryland, and developing work for Alvin Ailey/Fordham School as part of the New Directions Choreography Lab. She noted that, “In concert dance, there are very few, if any, female Dominican-American choreographers in the conversation/canon. I hope to change that.” She added, “I use the corporeality of the body to direct and choreograph environments that give rise to curiosity, foster creativity, and kindle transparency and exchange. My work is a manifestation of my colliding roles as maker, performer, and audience; making me invariably dependent on the people, the bodies, and the emotions of those who dance or watch one of my works.” 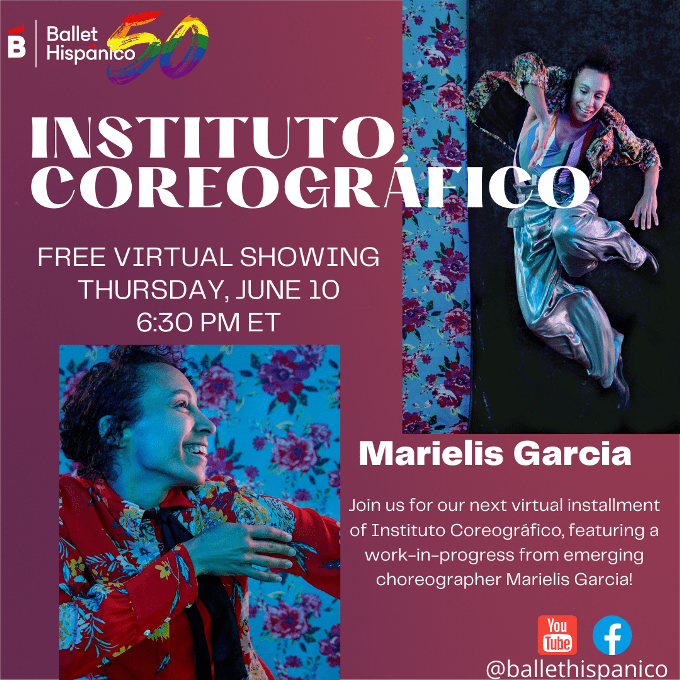 Filmed by native Hawaiian dancer, choreographer, and photographer Spencer James Weidie and featuring Ballet Hispánico company dancers, the piece will be followed by a live discussion hosted by Artistic Director and CEO Eduardo Vilaro, with special guests Garcia, company dancers Amanda del Valle and Lenai Alexis Wilkerson, and mentor Kimberly Bartosik. One of the hallmarks of Instituto Coreográfico (which was launched by Vilaro in 2011), the conversation invites audience members, dance leaders, presenters, and choreographers to respond, to reflect, and to enter into dialogue about dance and culture, thereby opening access to the dance-making process to everyone. “As a dancer back in the ‘80s,” said Vilaro, “I could count on one hand the number of Latinx choreographers who would come through the door. Instituto Coreográfico is a way of nourishing, mentoring, and developing leaders and artists of color, particularly Latinas and Latinos.”

As part of its virtual FTH at Home series, Flushing Town Hall will celebrate the vibrant and diverse choreography of the New York metropolitan area’s Asian American contemporary dance community on Friday, June 11, with its presentation of the 7th season of Nai-Ni Chen Dance Company’s CrossCurrent Contemporary Dance Festival. The online festival brings together some of the most creative contemporary choreographers, showcasing new works by Asian American dance artists.

Ya Yun Teng, Flushing Town Hall’s Chinese Projects Director, noted that the non-profit cultural organization “is proud to continue amplifying Asian/Asian American voices by providing a platform for emerging choreographers to showcase their works and fostering dialogue about their creative processes. We have been a strong advocate of arts equity since 1979, supporting local, immigrant, national, and international artists. We develop partnerships and collaborations to bring people together by presenting arts and culture from around the world. Highlighting Asian/Asian American perspectives and talents is an important part of our mission.”

The June 11 event will present the following six works:

母老虎 Tigress – a dance film in which color, nature, culture, and art of multiple disciplines intersect to explore the pressures, uncertainty, and beauty found in identifying oneself in a world that is as vast and complex as one’s identity, by Julia Foti, a dance artist from North Haledon, NJ, and 2021 graduate of Rutgers University;

UNNOTICED – a piece about the lack of representation of Asian-Americans in American history, media, and conversation, referencing Vincent Chin’s story and how his tragedy gave name to “Asian-Americans,” by NYC-based educator, dancer, and choreographer Fiona Tsang;

Lost in translation – delivering the message that attempts at absurd communication in a foreign land are never justified, as universal thoughts from the heart are lost and damaged in the process of translation, by Taiwan native and NYC resident Chieh Hsiung;

V/\NISH – an interdisciplinary exploration of the relationship between ephemerality and permanence in a world that values the physical and tangible over the experienced and felt, by Maya Lam, a Manhattan-based dancer, choreographer, and interdisciplinary artist, soon to graduate from Marymount Manhattan College; and

The performances will be followed by a live talkback with the festival’s panel of distinguished Asian American dancers Peiju Chien-Pott (multi-award-winning artist, who performed with the Martha Graham Dance Company 2011-16); Miki Orihara (Curator/Director of NuVu Festival, best known for her Bessie Award-winning career with the Martha Graham Dance Company); and Maura Nguyen Donohue (current Director of the MFA in Dance at Hunter College). The discussion will be led by Nai-Ni Chen, the eponymous award-winning leader of one of the most successful Asian American touring dance companies in the US for more than 30 years.

The virtual 2021 CrossCurrent Contemporary Dance Festival streams on Flushing Town Hall’s YouTube channel on Friday, June 11, at 7:30 pm. It is presented free-of-charge, but audiences must RSVP for viewing.

WHITE WAVE Dance Company, formed by internationally acclaimed Korean-born choreographer Young Soon Kim in 1988, strives to inspire audiences through multi-dimensional dance productions reflecting both modern and timeless themes and philosophies. In 2001, the company created the DUMBO Dance Festival in response to the community’s need for performance opportunities that would present and produce the work of rising choreographers at minimal expense for the artist and an affordable price for audiences.

This year’s 20th anniversary season is going virtual with 2021 VDDF, for an extended weekend featuring 60 contemporary dance troupes with a total of more than 350 artists from across the US, Mexico, Hungary, China, and Korea. They will present solo, chamber, and full-scale works offering the full range of new directions in dance in the 21st century.

Also scheduled in the 2021 VDDF is a Family-Friendly Program on Sunday, June 13, from noon-3 pm, celebrating the next generation of dancers (and their parents!) with Zoom session Hip Hop/B-boy and Modern Dance classes for kids of all ages, in WHITE WAVE’s Kids Can Dance education initiative. Following the class, seven companies will take to the stage and close out the VDDF in an exciting educational program featuring the best family-friendly performances of the 2021 festival.

For tickets, go online. A link will be sent to you one hour in advance of the performance; you will have five hours to view at your convenience. You can watch a preview of the 2021 VDDF here: