Playwright and performer John Feffer brings his solo show Clowntime to live audiences in July prior to a digital run at the Edinburgh Fringe Festival in August. Directed by Yury Urnov with video design by Kelly Colburn and Dylan Uremovich, Clowntime imagines a world where comedy is not only king but dictator. 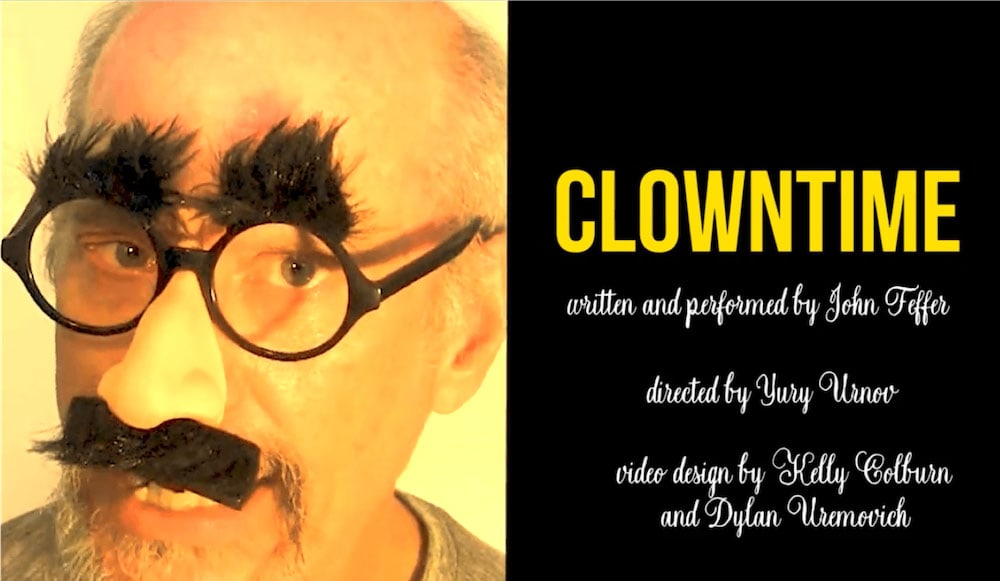 In the United States of the near future, everything has become a joke, and not just the economy. The nightly news is a comedy show. The movie theaters are full of slapstick animations. The president is a stand-up comedian. To get ahead in this world, you must have a high HQ. Those with low humor quotients are doomed to life on the margins.

Born without a sense of humor and incapable of acquiring one, Feffer’s Christopher Blank faces very dismal prospects. Yet through several turns of fortune, he ends up bringing down a dictatorship and saving the world.

In this world premiere one-man show, with a full cast via video, Feffer portrays the fall and unlikely rise of a straight man in an alternate universe that is just one joke away from ours. If you want a vision of the future, George Orwell warned, imagine a boot stamping on a human face—forever. Clowntime offers a different but no less terrifying vision of the future: a cream pie striking a human face forever.

John Feffer is the writer and performer of the critically acclaimed one-man shows The Bird, Edible Rex, and Stuff. He has performed his work at the Capital Fringe, the New York Fringe, the One Man Standing festival, and the United Solo festival. He is a recipient of a solo performance award in 2016 from the Maryland State Arts Council. He is a foreign policy expert at the Institute for Policy Studies and is the author of several books of fiction and non-fiction.

His plays have received rave reviews. “As entertainment that deftly mixes history, satire, pathos, and comedy, Next Stop: North Korea is an unqualified success,” concluded The Nation in 2019. “It’s a lovely, wonderfully written, beautifully detailed, and resonant solo show that I can wholeheartedly recommend,” wrote Christopher Henley about Stuff (2016) in DC Theatre Scene. DC Metro Theatre Arts called Interrogation (2015) “a deftly told dark comedy about a serious and timely subject that immerses the audience completely in its creative story.” DC Broadway World praised The Politician (2014) as “a brilliant mix of theater and politics.” The Washington Post said that The Pundit (2013) “deflates its target with a sharp satiric pin.”

Yury Urnov is the lead artistic director of the Wilma Theater in Philadelphia for 2020–21. Born in Moscow, Russia, Yury graduated from the Russian Academy of Theater Art (GITIS) in 2000 with an MFA and since then has directed over 40 productions in his home country, Europe, and Africa. His recent professional directing credits in the U.S. include Hedda Gabler and Ubu Roi at Cutting Ball Theater in San Francisco, the award-winning Thr3e Zisters at Salvage Vanguard Theater in Austin, The Pillowman at Forum Theater in DC, Mr. Burns, a Post-Electric Play at the Wilma Theater in Philadelphia, Putin on Ice and One Hour Eighteen Minutes with ACME Corporation Theater of Baltimore, and also KISS, Marie Antoinette, and You for Me for You at Woolly Mammoth Theater in DC, where Yury has been a proud company member since 2014. In 2009–2011, he was a Fulbright Scholar in Residence at Towson University, MD, where he still teaches. Yury serves as an Associate Director of the Center for International Theater Development, Baltimore.

Kelly Colburn is a DC-based inter-/multi-disciplinary artist working as a director and multimedia designer for live performance. Kelly is the Digital Producer and Director of Photography for Theater Alliance’s digital season and the Artistic Lead for Theatre at Flying V. Kelly received a 2019 Helen Hayes Award for her work on Blood at the Root with Theater Alliance, was a 2017–2018 NextLOOK Resident, and a recipient of the 2018 Jim Henson Puppetry Grant.

Dylan Uremovich is a lighting and multimedia designer for live performance and installations, based in Washington, DC. He earned his Masters in Fine Arts from the University of Maryland, focusing his studies on lighting and multimedia design. He received his bachelor’s degree in theater design/technology from Northern Arizona University. You can check out his other work at UremovichDesign.com