Need a good laugh? The Little Theatre of Alexandria presents Neil Simon’s comic gem Rumors, a first-rate farce with plenty of physical comedy, high-octane energy, and loaded with the playwright’s classic wit. Plus it’s not home alone on Zoom; it’s live on stage where comedy belongs. 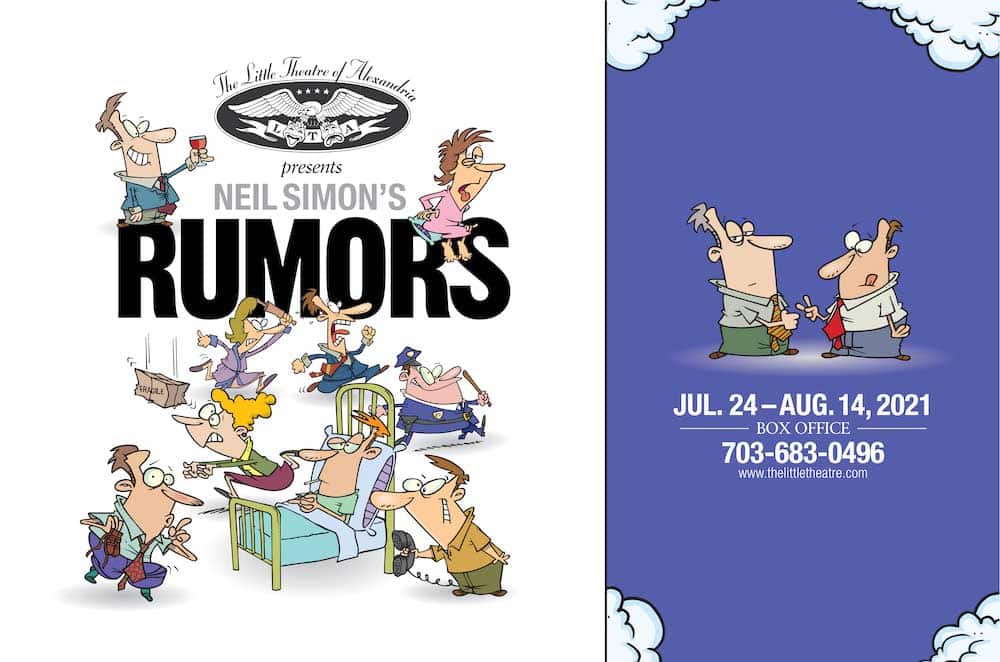 Rumors begins with three couples as they arrive at an upper-crust Manhattan anniversary party to discover that their host (the Deputy Mayor of New York), has accidentally maimed himself. The couples go to outrageous lengths to keep the police and press from finding out the truth. The farce was written in 1988 so it’s not about contemporary shenanigans. Or is it?

Matthew Randall directs a cast of ten (bios below). Rumors was produce by Nick Friedlander and Jennifer Lyman and assistant-produced by Sarah Holt. 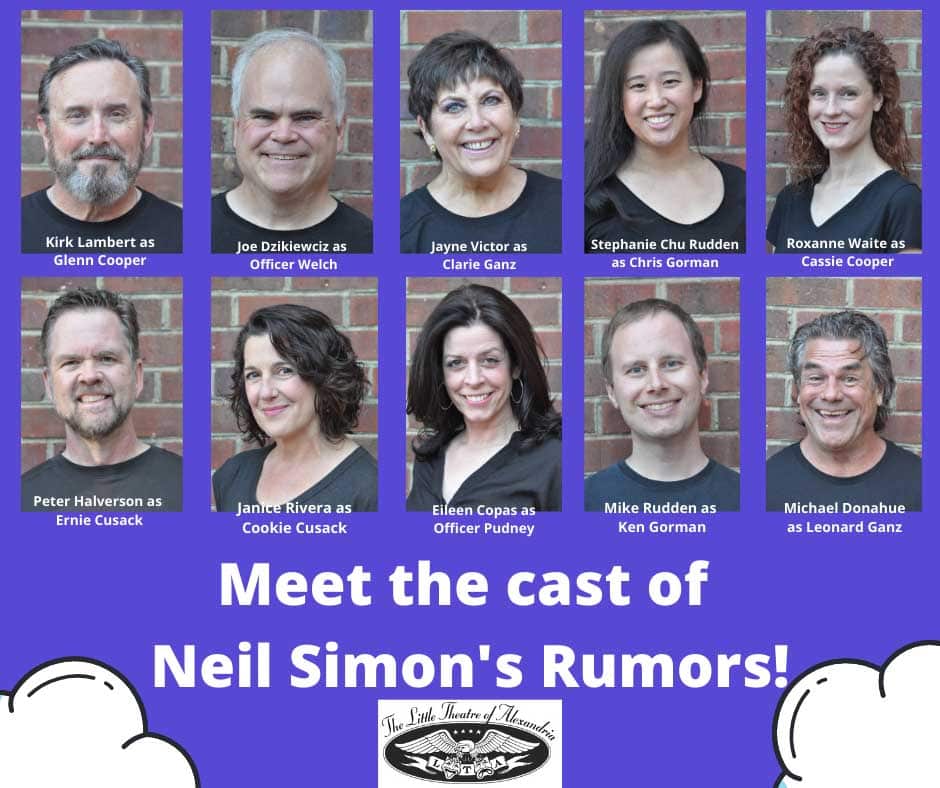 Eileen Copas (Officer Pudney) is tickled pink to be part of the cast of Rumors! A mere 31 years after nailing the role of Child #something in the St. Luke production of Cheaper by the Dozen, Eileen returns to the stage, actually having permission to get on it for once. She has worn many hats over the years, yet travel and entertaining her friends, family and students have always brought her the most enjoyment. She would also like to add that her mom is incredible.

Mike Donahue (Lenny Ganz) This is Mike’s performing debut with LTA. His acting credits include George in Moon Over Buffalo, Bob Ewell in To Kill a Mockingbird, Stanley Kowalski in Glass Mendacity, George in Of Mice and Men, Tom in Dinner with Friends, Andrew Wyeth in Sleuth, Joe in All My Sons, Devil in Bobby Gould in Hell, and Macbeth in Macbeth. Mike has a BFA in performing from VCU and an MFA in directing from the University of Memphis, Tennessee.

Joe Dzikiewicz (Officer Welch) is delighted to make his LTA debut. When his nest emptied, he returned to the stage as George Bailey in It’s a Wonderful Life: A Live Radio Play (MCP). Since then, he has done a little Shakespeare and some one-acts, but most of his energy has been put into films, which he also directs. Notable is Flowers for Daniel, a film-noir spoof where Joe played all the parts, including the femme fatale. Joe is also a member of the Party Mix Improv troupe.

Peter Halverson (Ernie Cusack) returns to LTA having spent his COVID hiatus behind a microphone, recording roles for Between Acts, a dramatic podcast series. Previously, he performed in area productions including You Can’t Take It with You (LTA), The Fabulous Lipitones (LTA), Spamalot (LTA), Man of La Mancha (MCP), The Best Little Whorehouse in Texas (DS) and Petpourri (SCT). Peter has also hung lights, run boards, and fed cast and crew during tech week. Much love to J.R., his best coach, critic, and fan: Thanks, Schmoopie!

Kirk Lambert (Glenn Cooper) is excited and honored to be a part of this magnificent cast and crew and thrilled to be back in live theater! His previous LTA roles include Arthur Parker in The Haunting of Hill House, Abraham Van Helsing in Dracula, and PM Gordon Brown in The Audience. Kirk has also appeared at the Kennedy Center, Wolf Trap Filene Center, Studio Theatre, and Alden Theatre. He is a proud member of SAG-AFTRA. Kirk would like to thank his family and friends for their support.

Mike Rudden (Ken Gorman) is excited to make his LTA debut in a role he first performed 10 years ago with Vpstart Crow. Locally, he has also been seen as Joe in Bachelorette (DS, 2015 WATCH nomination), Nick in Who’s Afraid of Virginia Woolf? (CFTC), Mozart in Amadeus (PPF, 2016 WATCH nomination), Hinckley in Assassins (DS) and Vince in Tape (DS). He is a high school math teacher for Fairfax County Public Schools, but his true passion is taking care of his one-year-old daughter, Cece.

Stephanie Chu Rudden (Chris Gorman) is grateful to be in her fourth production at LTA, having previously appeared in Avenue Q, Spamalot, and In the Heights. As an actress and designer, she has worked on more than 80 dance and theater productions, receiving two WATCH nominations in lighting design and as a supporting actress. She thanks her on- and off-stage husband, Mike, for going through this journey with her and being a wonderful father to the most adorable one-year-old, Cece.

Jayne L. Victor (Claire Ganz) is delighted to be back on the LTA stage in Rumors playing opposite her real-life husband! Past acting credits include Auntie Mame (LTA), Moon Over Buffalo, All My Sons (WATCH nomination), House of Blue Leaves, August: Osage County, and Dinner with Friends (PPF). Directing credits include Auntie Mame, Moon Over Buffalo (11 WATCH nominations), and Glass Mendacity (PPF).

Roxanne Waite (Cassie Cooper) is thrilled to be making her LTA debut! This is her second time appearing in this role, having previously played it with PPF in 2014. Other local theater credits include Toni Marston in And Then There Were None (PPF) and Mrs. Cratchit in A Christmas Carol (PPF). When not onstage, she fulfills many other crucial backstage roles, like stage managing, running lights, or crewing. Roxanne is currently serving on the board for PPF. Many thanks to Matthew and this amazing cast for such a fun experience!

ABOUT THE LITTLE THEATRE OF ALEXANDRIA

Founded in 1934, The Little Theatre of Alexandria began as a small play-reading group. Full productions ensued, and in 1939 the group bought a rickety former blacksmith’s shop located in Ramsey Alley, between Lee and Fairfax Streets, for rehearsal space and construction of sets and costumes. Since 1934, the theater has mounted over 350 productions.

Early productions were held upstairs at Gadsby’s Tavern and recreated life in the 18th century, right down to the visit of President and Mrs. Washington journeying from their Mount Vernon home. Over the years, audience members included a veritable “Who’s Who” of Washington. President Harry S. Truman attended on more than one occasion, and notes say that Lynda Bird Johnson even participated as a serving wench! In June 2001, President George W. Bush made LTA his first Washington-area theatrical outing when he came to see his sister-in-law perform in Neil Simon’s Proposals.

During the early 1940s, with war in both Europe and Asia, LTA decided to suspend operations. In a time of war rationing, theater seemed like a luxury that was best set aside until peace returned. In late 1945, the theater resumed normal operations. During the 1950s, an empty lot at the corner of Wolfe and St. Asaph Streets became the permanent home of LTA. At first, the City of Alexandria generously agreed to rent the space to LTA for $1 per year. The theater building was finally completed, and the first production – the comedy Send Me No Flowers – opened on November 18, 1961. A west wing was added five years later to accommodate dressing rooms, a sewing room, a rehearsal hall, and a carpenter shop. A later addition included more shop space and the Council Green Room. In the 1970s, LTA formally purchased the land from the City of Alexandria. Today, LTA is the oldest award-winning theater in the Washington metro area and one of the few community theaters in the country with its own building and an ambitious seven-show season.