An Almost Holy Picture has been described as “an oddly soothing and quiet exploration of faith and hope under the sometimes-challenging circumstances life throws at us.” For me, it functioned as a kind of meditation, guided with gentleness and gentility by the always effervescent Bruce Randolph Nelson.

Nelson plays Samuel Gentile, a former pastor now keeping the prim grounds of a church. In his checkered shirt, protective gloves, and large straw sun hat, he putters around and moves foliage as he shares aspects of his life, his choices, and the circumstances that have shaped his “personal idea of God.” Samuel and his wife, Miriam, try to find comfort in the rituals of day-to-day life while raising and striving to protect their beautiful daughter, Ariel, born with an incurable genetic disorder resulting in golden hair covering her body.

When he was only nine years old, Samuel heard a voice that said “Follow Me.” One of the life-shaking events in his life was the horrific church bus accident that claimed the life of nine children. He’s quietly traumatized constantly trying to find solace where none can be found. At the age of 9, his cherished daughter, Ariel, involves him in a situation that alters all of their lives. Playwright Heather McDonald’s script is filled with subtle patterns that make you wonder and ponder about the coincidences.

The images stream like poetry as Samuel questions life and fate with “grace, faith and the mystery of God’s presence in quiet and absence.” Where was God when the bus careened off the highway killing innocents? Or when Ariel was tormented at school as a freak of nature whose entire body had to be shaved to look “normal”? The questions could sit heavy as stones, but McDonald eases them into the script with mantralike ease so they become part of the landscape of being.

Ariel grows into a precocious, inquisitive, delightful child under her father’s watchful and protective eye. Nelson sparkles in his rendition of her voice, her laugh, her dismissive reactions when derided and called a “golden gorilla-girl.” The family’s lives take a fascinating turn when she befriends a neighbor’s son who seems to see her as she is, truly looks at her without disdain but with appreciation tinged with wonder. How hard can a loving father hold even squeeze his tender child to protect her before life happens and gets in the way? How can a photograph be an act of love, adoration, art, and exploitation all at the same time? Heather McDonald grapples with these fascinating issues of love, devotion, confusion, and fear with tenderness and care as Ariel’s quest for freedom and expression collides with her father’s stranglehold to protect her.

Nelson delivers a powerhouse performance in this portrayal of the anguished protective father, tending his garden with devotion while ruminating and reflecting on God’s will. His mannerisms and expressions bring poignancy and life to the characters he portrays.  There’s a depth to his soul that comes through the passages. Watching him up close as he works through life’s twists and turns is a masterclass. He’s also got the flexibility to kneel in the garden for long stretches and crouch on a chair to get his points across, nicely directed by Noah Himmelstein.

Lighting by Harold F. Burgess II is truly marvelous enhancing the production with a soft shimmer and shading that cascade across the set awash in coral blue in one scene to refreshing green to the chilly shadows of winter by the end. Sound by Megumi Katayama is equally extraordinary transitioning from beautifully sacred one moment with loud clanging church bells to tense apprehension and treacherous thunderous storms that pass over with time. The well-designed set by Paige Hathaway is filled with pleasant greenery in the foreground and patches of large white geraniums caressing the blue horizon of a gorgeous sky seen through a large portion of the back fence.

An Almost Holy Picture clinches the season at Everyman Theatre. Nominated for a Pulitzer, it premiered in 1995, had a stint on Broadway in 2002, and is only sporadically produced, probably because of the melancholy tone and pace. But to me the style is timeless and eternal and with the right actor in this comfortably streamed format can perfectly relay the quiet unrelenting fortitude needed to get through each day with acceptance and grace.

Running Time: About one hour 45 minutes including one intermission. 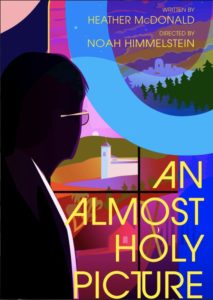 Video on Demand (VOD) tickets for An Almost Holy Picture are on sale online at $30 per household, allowing for an unlimited number of viewers at home through August 22, 2021. Subscriptions for the newly announced 2021–2022 season at Everyman Theatre start at $123 and are also available by visiting everymantheatre.org or calling 410.752.2208. Box office hours are Monday to Friday from 9 am until 6 pm, and Saturdays from 10 am until 5 pm.