“If we fully encourage women to be brilliant, and powerful and independent, are we also ready to encourage men to be beautiful?” — The B Word

On July 30, the third cohort of DC’s unique playwrights collective, The Welders — Welders 3.0 — embarks on its maiden voyage with the production of The B Word, a theater piece written and performed by Jared Shamberger.

As is the usual practice of this highly unusual group, Welders 2.0 turned over the infrastructure of the organization to the new cohort over a year ago. And the production was scheduled for last year but — you know: the pandemic intervened and adjustments had to be made. One adjustment was made to the date of the presentation. Another adjustment was made to the form. While The B Word remains a theater piece, Shamberger acknowledges, “It is not a play. I’ve had to lean into and accept that. I’m a theater person. The pandemic meant I had to embrace a new medium. Really it’s a film.” Nevertheless, as a theater person, Jared felt an urgency about presenting this work, “especially in this time. I had had the idea in 2018–19, but it became more urgent in quarantine as we experienced this aloneness and being disconnected and relying on more nontraditional ways of connecting. A show about community, identity, and relationship seemed important so as to help us to remember who we were, who we are, and who we could be.”

If you have been watching the DC theater scene, you have probably heard of Jared Shamberger. He was a member both of the 2018 Helen Hayes Award–winning production Still Life with Rocket and of the highly acclaimed reimagining of Day of Absence by Douglas Turner Ward. Both of these performances were produced under the umbrella of the small, formidable, and feisty, Anacostia-based theater company Theater Alliance. (If you haven’t seen something by Theater Allliance, you should. The B Word is, in fact, directed by Theater Alliance Artistic Director Raymond O. Caldwell. So when you see The B Word, you’ll get an intimation of the Theater Alliance boldness.)

Jared has also been a reliable presence with both Alan Sharpe’s African-American Collective Theater and the Brave Soul Collective, of which he (along with Monte Wolfe and others) is a founding member. Both of these theater companies focus on the stories of Black LGBTQ+ lives. “The B Word is an extension of all of those things. I wouldn’t be doing the work that I am doing if it weren’t for Alan and Monte. [Working with these two companies has clarified for me that] visibility is important, being able to tell the stories that I want to tell in the way the I want to tell them without the barrier of a theater company or a group of people saying. ‘We would love to do your work but we have to change this or that.’ It’s important to be in control of your own story. If you are not telling your story other people will tell It for you.”

This same commitment to telling and being in control of your own story is embodied in how Welders 3.0 works as a cohort. This makes Jared’s work a good appetizer and introduction to what Washington theater audiences can expect from this company. “Even the way that we applied for the Welders — we wanted to see an organization that really highlighted and celebrated the stories of Black people and the work of local Black artists. We went into the process knowing that whether we were selected or not, the six of us wanted to do work together. What we bring to the organization is local Black artists telling Black stories.”

Indeed, promotional materials for the The B Word say that it “is inspired by and devised from interviews with Black gay men across the DC, Maryland, and Virginia area who were asked to speak about the intersectionality of race, gender, and sexuality.” This documentary-style format allows for an examination of how the concept of beauty functions in the lives of Black gay men.

“The idea of examining Black gay men and their relationship to the idea of beauty came from conversations I was having with my own friends, over brunches,” Jared told me. “A recurring theme [in these conversations] was the idea of feeling chosen, wanted, seen, and validated in a way that you hadn’t been validated before. I wanted to talk about that, but I didn’t want my voice to be the only voice. I valued those brunch conversations. So — back when this was intended to be a one-person show on stage — I thought I would conduct interviews on camera. Now that it’s all on film, rather than in person, footage of myself is also included.

“My process is a bit chaotic. I think, overthink, then re-overthink. [I imagine that] anybody else would plan this production out in detail. For me, it was just ‘Let me see if these people are free.’ I called people up. I looked at who I had in terms of age, experience, etc. — and who I was missing. I asked: do you know somebody who is this, this, or this? I called, scheduled, and conducted the interviews in a week.”

At first, the interview questions Jared planned to ask were personal. But then he thought, “I do not want to put Black gay men on camera and have them reveal the most personal details of their lives for the world to see.” So he devised a second set of questions that were safer. Or so he thought: “Have you ever felt beautiful? If you have, describe when that was. How do you feel in Black spaces? I was surprised by how thoughtful each of the men were [in their responses]. There were stories shared about colorism that I wasn’t expecting. Comments about identity. People had revelations in the interviews, things that they realized about themselves that they hadn’t before. That blew me away.”

“If we fully encourage women to be brilliant, and powerful and independent, are we also ready to encourage men to be beautiful?” In this tagline for the show, Shamberger points to how the different gender expectations historically placed on men and women have seen some shifting. “That’s a thing we foisted on women and girls (you must be beautiful). With boys we do something different: you must be tough, steady, strong. Now we are able to talk about women as thinkers and scientists. But I don’t think we have moved much when it comes to men. There’s not a lot of room for men to be soft, compassionate, and beautiful.

“When I say ‘we’, it’s society in general sometimes. A lot of time I’m specifically talking about the Black gay male community, a community that I belong to. I understand this better. Being Black and gay is different than being anything else and gay. Being Black, gay, and male is different. How do those identities support each other or come into conflict or influence each other? This piece is a member of the community speaking to the community. A member speaking to other members.”

With The B Word, the experiment that is The Welders sets sail once again. For the first time, it is being helmed by a group of Black playwrights intent on carrying on the Welders mission, says their website, to “create significant, meaningful, direct engagement between artists and members of the community.” Thus far, this cohort has been challenged by, navigated, and survived the uncertain waters of the pandemic.

From here on out, here’s wishing them calm seas and prosperous voyage. 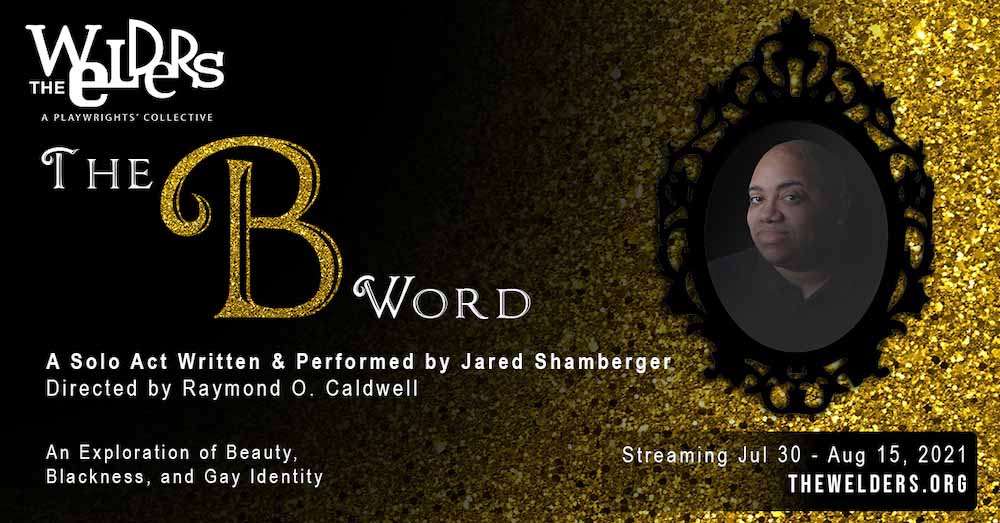 The B Word presented by The Welders will stream on demand July 30 through August 15, 2021. Tickets are available online.

An examination of Black gay men and their relationship to the idea of beauty.

Girls’ Night (with Spirits) explores Black womanhood as legacy through Rey, a Black millennial woman who has done everything right (she thinks) including reaching the adult milestone of buying her very own house. But the house may be haunted by a ghost with a strange obsession with her bathroom.

Incorporating his solid dance and storytelling background, JR will present a two-part mixed-arts project that explores identity and community, first, through a one-man autobiographical piece, followed by a performance devised from community response to the themes in the first piece.

Narrated by three women called the ‘Round-the-Way Girls who function as a Greek chorus, the play infuses spoken word poetry, hip-hop, children’s hand games, and call-and-response to tell a story that recounts one woman’s journey from tragedy to empowerment.

Developed and workshopped in Brazil in spring 2018 as a one-woman show, Rock, Paper, Scissors questions, interrogates, and explores Reid’s own intersecting identities as a Black Queer-Bisexual Woman.

Characters in a near-future New Orleans continue to grapple with the impact of Hurricane Katrina and use the children’s tale blue honey bees to cope with gender identity, grief, and change.