Four writers behind the Emmy-winning Daily Show with Trevor Noah are touring their own stand-up comedy show, and they’re stopping at Arlington Cinema & Drafthouse September 3 and 4, 2021, to give the nation’s capital a taste of TDS’s trademark political humor … and jokes about “their failed dating lives” as well.

The Daily Show Writers Stand-Up Tour will feature writer-comedians Randall Otis, Matt Koff, Joseph Opio, and Kat Radley. Otis has performed around the United States—including at the New York Comedy Festival—and has been featured on The Late Show with Stephen Colbert, VICE, and The Huffington Post. Koff is an Emmy-winning staff writer on The Daily Show, and has toured with John Oliver and Bo Burnham. Opio, a Ugandan satirist, has performed stand-up on three different continents and has written over 360 episodes of The Daily Show. Radley’s debut comedy album, The Important Thing Is That I’m Pretty, premiered at #4 on the iTunes Comedy Charts.

Audiences will be in for a treat seeing the satirists behind one of television’s top late-night shows show off their individual comedic styles. Maybe afterward we’ll tune into The Daily Show and finally get a sense of which jokes are whose. Sometimes we forget that there are tens of individual writers who spawn the words that come out of a host’s mouth.

For reference: according to an article in Vulture, the Daily Show with Trevor Noah writing staff is 19 writers strong, including one head writer, two senior writers, and Trevor Noah himself. That’s the thoughts and commentary of 19 people going into the monologue that one man delivers. Perhaps that’s why the practice of bringing a writer out for one of a show’s “interview” segments, giving them a soapbox of their very own, has become increasingly common. Amber Ruffin’s soapbox on Late Night got her a show!

I’m both a fan and a practitioner of satire — albeit a young one. I’m lucky to have been the political cartoonist for The Lincoln Project this past year, and I host and show-run The Hilltop Show political comedy show and satire publication operated by over 50 undergraduates and graduate students from around the world, based at Georgetown University. As a college student who wants to go into this business, I for one am especially excited to meet the actual humans who come up with this stuff, and perhaps better understand how their individual comedic stylings blend together to become what we know to be The Daily Show with Trevor Noah.

I know (based on many, many informational calls) that many if not most late-night writers have to “write for the host.” In September 2019, I took the Hilltop Show team to a lunch in New York City with a group of writers from various late-night shows, and a Daily Show writer was in the mix (I remember the writers collectively asked us to not attribute their names to any advice we gave, and I will obviously respect that). She told us that Noah plays a prominent role in directing the course of the show, and that writers suggest and comment on subjects they predict Noah will be interested in, hoping those subjects will make it to the teleprompter. Who knows how that system has or hasn’t changed over the past two years? But regardless, the writers aren’t the stars of the show. I’m excited to hear right from the writers what topics they’re interested in, and hear their individual takes on those topics in their stand-up. 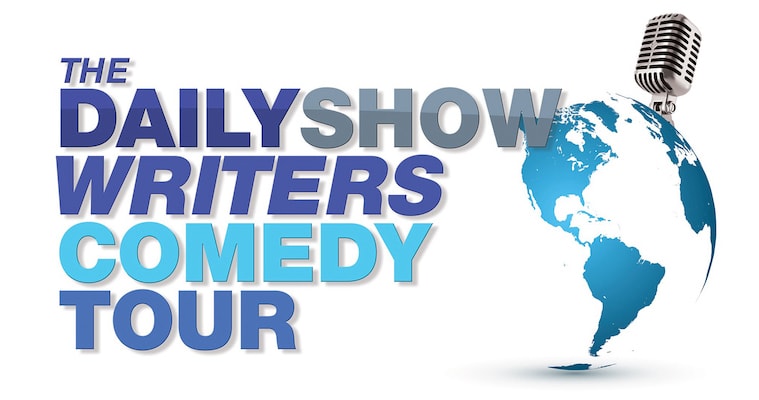 The Daily Show Writers Stand Up Tour comes at a time of reckoning for the late-night genre. With late-night shows returning to in-person audiences, many have wondered what COVID-era elements will stay, and which will be replaced with February 2020 fare. Seth Meyers’s Late Night and even The Daily Show — both among the more newsy and political late-night shows, and nominated for the Outstanding Variety Talk Series Emmy this week — have been critically acclaimed for their adjustments to the medium of late-night-sans-audience. Many critics have gone so far as to say these two shows’ current audience-lessness plus the resulting adjustments outclasses their old ways.

Meanwhile, Comedy Central has announced that The Daily Show will have a “brand-new look and feel” starting September 13 after a summer hiatus. Trevor Noah recently mentioned in an FYC Chat with Arsenio Hall that he and his team have a “few surprises” in store.

“As for going back to the studio, I have a few surprises as to what that will look like. I’m working on a few things with the team, and we’re really excited because I want it to be intentional. People always say, ‘When are you going back?’ I’m never going back, I’m only moving forward.’”

That last bit caused me pain, but awesome, can’t wait.

What is this “new look and feel”? Will The Daily Show change the elements that have gone over well during COVID? Will they have audiences? As the delta variant surges, this is not guaranteed.

In the FYC conversation, Noah suggested that he might not even wear a suit when he’s back in the studio. “I might never put on the suit or the shoes or whatever. I don’t know. This is who I am. I think the pandemic has stripped a lot of people of that pomp and ceremony. I think it’s a good thing. We see each other a little bit more. I don’t know if I’ll ever go back to the suits and the leather shoes. If I do, I do. If I don’t, I don’t — but I will no longer think this is something I have to do.”

This Daily Show viewer kind of likes the formalities, but I understand his point. I also understand as an aspiring host myself that hosts can more easily lean into their strengths in particular clothes. For example, John Mulaney’s old-fashioned suit, his 1930s-radio-host vocal intonations, and his contemporary, oft-indecorous material have frequently been cited as a genius combination: a meeting of the old and new.

Noah seems to be in his element when he’s in a hoodie instead of a suit. To each his own. I like suits.

Retrospectively, the pandemic, despite all the struggles it imposed on them, also gave the late-night hosts a unique time where they and their staff were “allowed” to flounder, be vulnerable (see: Jimmy Fallon’s inclusion of his children in his bits, which is objectively charming), and experiment. And that allowance gave them time to better understand their personal strengths — where they, as people, and their respective show formats shine, and where they struggle.

In a recent conversation with Uproxx, Seth Meyers asked Late Night producer Mike Shoemaker if the audience-less version of the show is “the most natural version of the show we’ve ever done,” to which Shoemaker said, “Yeah. Definitely, yes … I think we always took how something would play to an audience into account.”

While some hosts like Stephen Colbert are self-professed audience-needers (at least according to his wife), other hosts like Seth Meyers have hit their stride speaking right to the camera, cutting out the middleman of the studio audience as an additional group to entertain, in addition to millions of viewers online. Late-night is weird.

Shoemaker elaborated in the Uproxx interview: “Pre-COVID, we had a test audience, which is, basically, during our rehearsal, we would invite people from the building, 25 tourists. And we didn’t always rely on it, but that [drove] a lot of the choices. We tried everything that way, and then that was kind of the barrier to entry. And that’s all gone. It’s really like brain-to-mouth to television.”

Perhaps this has to do with the fact that the more political late-night shows play out closer to the style of a monologue delivered by a cable news host. If Chris Cuomo, a host known for his reporting combined with comedic commentary, had to play to an audience, his show would have quite a different pace and feel (it would not work). And yet, it seems that late-night hosts and Cuomo are merging their styles into a similar genre of left-leaning, facetious news commentary, all ingested by, typically, the same audience … but that’s a Pandora’s Box if there ever was one. Focus, me!

Ultimately, the audience-less approach to late-night comedy has turned the hosts into YouTubers. The Daily Show has frequently opted for images swooshing across the screen, quick cuts between bits, zoom cuts for emphasis, and hoodie-wearing hosts. You know, YouTube.

Today’s late-night shows are frequently critiqued for seeming to want to appeal to young people but feel like Johnny Carson flossing. (Or if you’re older than 20, Johnny Carson doing a particularly rigorous TikTok dance that captivated a nation for a frighteningly extensive period.) The Daily Show with Trevor Noah is less subject to these critiques than other shows, but the late-night genre itself carries an air of tradition, as if it’s something your parents probably like and thus you should cast it back into the fiery chasm from whence it came. Perhaps that’s why I like the suits.

In a time when YouTube and Twitter audiences are demanding the late-night shows adjust to their appetites, and COVID robbed the shows of their characteristic audiences, it is understandable that the transformation to YouTuber-dom has begun, consciously or unconsciously (you’ll have to ask the showrunners). Frankly, going full Markiplier is a smart move for a commentary show if you can’t get an audience. Why reinvent the wheel if you’re also making audience-less videos where a funny host talks into a camera, to YouTube? And if The Daily Show is attempting to reach young people, which its comedic stylings and political foci frequently indicate, the YouTuber approach might be its ideal medium.

But it will be up to each show to reflect on its past year and determine what, in a post-COVID (knock-on-wood) world, is best for its team and its host. Part of me fears that John Oliver may never leave his “white void” (I’m still wondering how the Season 7 finale — his exit from the void and its triumphant, Death-Star-explosion-esque destruction — narratively parses with his quiet return to his interdimensional prison in Season 8. We’ve got a continuity error, boys! Tim Carvell, I’d like a word).

Based on the last year, I think The Daily Show with Trevor Noah would work well as a laugh-track-less series. But, I also want to sit in a Daily Show audience again before I die. I’m happy to duct-tape my mouth if they want.

And who knows? To match their more YouTuber-like style, and Noah’s observation of a genre increasingly “stripped” of its “pomp and ceremony,”  the shows might begin to supplement their political, informational content with increasingly, if you will, secular fare. We’ll see what happens. In the meantime, I can’t wait to see The Daily Show writers’ personal takes on both.